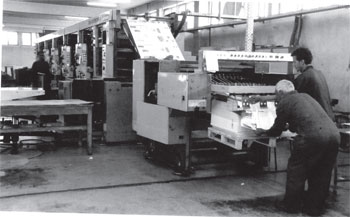 Innovation is an adventure that people individually and collectively look for, enabling them to diversify activities. Through innovation, activities become easier than their old ways of functioning. It brings simplicity and takes manufacturing and other industries into specialization. This fact is witnessed in the printing press industry. When talking about printing history, you can only imagine how intricate it was when you heard from the workers within the production of this field.

You may take this newspaper in your hand as an ordinary task performed, since it reached your hands just with a couple of Nakfas. Yet, it is only possible to know how tedious and challenging this job was when noting the monotype system or letter press method— where every letter in metal form is collected and retyped to create pages of newspapers, books and other sorts of reading. This issue is worth covering perhaps more than any other newspaper related issue.

To know more about this topic, your opportunity cost is zero in relation to how impressive the Printing Press is in Eritrea. However, instead of jumping straight to Sabur Printing Press (SPS), it is quite right to look back and relate to some historical facts and share with you how I was personally impressed by SPS.

Printing as the most crucial means of mass communication has evolved for centuries and inspired a social revolution that is still in progress. Just before the 2nd century, Chinese put their first hands on it before anyone else did. Still, the expansion was not popularized to the rest of the world. Later, the Germans emerged with a pioneer, Johannes Gutenberg who solved the problem of molding type in 1440 and hence invented the first printing press in history.

The trend of printing likewise developed and spread through Europe and began to replace hand- printed texts for a wider audience. The introduction of the lithography system was made possible by the end of 18th century. This process of chemical printing quickly popularized itself throughout Europe since it enabled artists to produce multiple copies of freehand drawings. All in all, most important and versatile printing process today is lithography and this has substituted all other forms of printing.

The first printing press in the Horn of Africa was in Eritrea in 1863, principally through the arrival of the Turkish and before Italians set foot in the country. The foundation of printing is about 150 years old. The Italian company Franccescanna Printing Press was one of the oldest printing press firms launched in 1911 and is still functioning today in Asmara.

Initially, the process of printing in Eritrea was introduced by an Italian Bishop, Lughi Bianchier from the Catholic Lazarist order, for the purpose of imprinting spiritual scriptures. In the subsequent years, the Italian regime manipulated and used this opportunity to print military papers and documents.

The printing press failed under the administration of British with the defeat of Italians in 1941. All the printing firms in Eritrea were confiscated by the British. They remained under it and eventually returned to Italian government when the British left Eritrea.

Later on, the Italian government sold the firms to private owners. The printing firms then consolidated into one name, EI Poligraphico, until they were nationalized by the Ethiopian Derg regime in January 1975. In 1984, the name El Poligraphico was changed into Adulis Printing Press.

Actually, the history of the printing press in Eritrea goes far beyond this. The Eritrean People Liberation Front (EPLF) started printing using typewriters and stencils in early 1970s and developed lithography printing by the late 70s. After independence, the EPLF printing workshop integrated with the printing enterprises formerly administered by Ethiopia. Together, the two printing enterprises were administered under a common name, Adulis Printing Press. Experienced manpower and the introduction of new equipment raised the fame of this company. By 1997 then, under the privatization policy of the government, Adulis Printing Press was transferred to Hidri Trust Fund and currently it is playing an exquisite role in the national printing, going under the name Sabur Printing Services (SPS).

This private limited company was established in 1997, through the purchase and consolidation of previously government-owned printing presses. In 1998, SPS relocated to a new site. The factory is stationed in a compound around 36,000 m2 (the largest printing plant in Eritrea). SPS has come a long way and upgraded its human resource capacity to meet the needs of new technology to professionalize the country’s printing industry and widen its market share for its printed materials. By now, SPS follows a digital pre-press, a modern bindery and the most productive color offset and web press in the country. The link with international and national stakeholders remains imminent for the company to equip itself with a quality standard and reliable supply. It is put straight forward in the documents of the SPS that the company proudly declares its strict policies against corruption and toward investor oversight, which helps the company not only have cost effective raw materials but also become free of corruption that may be seen in the raw materials market. Sabur Printing Service additionally participates in international bids with suppliers and printing firms.

Up until early 90’s, the company (like other printing firms) followed the letter-pressing method but through time the lithography system was introduced and the printing process found itself quicker and better with metal plates. In the last ten years Sabur managed to equip its production unit with modern machines changing its printing procedures from analog to digital. When compared to the early days, the General Manager of the company Mr. Mussie Tesfamariam stated that Sabur has earned a vast amount of experience in all these past years. Most of all, the eloquent and disciplined employees under it remain the secret to the strong foundation of the company. They keep pace with the existing technology and new procedures. Around 274 employees are deployed in the factory fulfilling different tasks performed in the pre-press, press and binding departments. The range of employees’ in age stretches from youngsters to workers with a sixty years of experience. 70% of the workforce is covered by the youth.

To upgrade the skills of employees, the company has organized an on-job training session for more than eighty workers over the last four years, which goes for a year long. As there is no educational curriculum that particularly focuses on the field of printing, the company organizes and prepared a syllabus to train its own employees. This practically helps the employees cope with the rapidly changing technological advancements and hence a good productivity. At the moment the human resource department of the company puts a least of 12+ qualification as a requirement for hiring new employees because an employee has to minimally know how to deal with a computer and operate it.

The company strives for quality output and specialization. Verily, the scope of printing is wide yet SPS momentarily is focusing on paper printing. This multi-printing press company has supporting divisions that feed directly to the production unit. The administration, finance, purchasing, training and maintenance divisions can be listed out. The company follows a line processing method of production. The work of printing in the olden days was troublesome and separately performed (typed first in pre-press, leaving spaces for photos). This is unlike today’s printing press procedures where everything related to design and layout is much more well-organized by pre-press departments and printing is done without much hardships thanks to computer networks. This enables the company reply to its orders quickly.

Ten thousands of newspaper are printed in a night. The machines inside Sabur are comprehensive such that they are old enough to work with the old system and new enough to match the existing technology. The Computer to Film (CTF, old) and Computer to Plate (CTP, existing) are the procedures that need to be followed for a final published paper outcome. The machines specific tasks include packing, binding as well as printing. 90% of the machines in SPS are from Germany’s HEIDELBERG. The Agfa brand pre-press film plates machines are from Belgium. Meanwhile the General Manager noted that raw materials are fully imported. A strong 40-year relationship is developed with the suppliers, so no problem on parts and raw materials access, he adds. The source for paper is from Chinese companies.

The byproducts from these machines are recommended to be recycled by receiving companies, thereby the environment is put into consideration.

In the production site it has an A0 (eight times A4 size) and B0 sizes of printing machines. The company can print 1.5 up to 2 million orders of books in a year by the capacity it holds right now. In the old days, it was only in 10 thousands. Annually, SPS receives three to four million educational book orders. In the last year alone, it has signed an order of a sixty million books sponsored by the Global Fund.

Recently the company acquired a new pre-press machine (Avalon) that uses a thermal plate (a chemical-free plate), which significantly and positively contributes to the health of the employees who are directly engaged with chemical plates. Through time, it will become harder and harder for the company to get and afford the chemicals it is using right now so being in line with the chemical free plates is a good option. In the pre-press software side, the company uses latest software to design and layout scripts and photos. The field of printing triggers owners to persistently follow technological trends or otherwise declare bankruptcy as there is no other option in this industry.

For the health insurance case, it is secure that on every three days all employees are checked by a visiting special doctor. In the olden days, printing was performed in dark rooms just like photography systems. These days thanks to technology it is possible to work out in light and chemical-free plates, providing greater comfort to employees.

The General Manager Mr. Mussie, when asked about challenges that the company might face, he mentioned keeping up with technology to stay current but also indicated that the complexity of the business requires deep understanding and care about the dynamic industry. Another possible challenge foreseen is the international companies monopolizing supplies (for retailing and maintenance purposes) through their agents.

Nonetheless, the experience gained over the previous two decades is incredible, starting from mindsets, staff capacity development and awareness among the working society (youth want to join the industry since it is a technology-based industry). The sophistication of technology on one side and the companies that consume papers on the other, the printing press industry plays a more critical role moving forward. According to Mr. Mussie, Sabur multi-printing press company is working to further specialize. Global competition is driving this specialization. SPS is looking forward to expand to regional markets and to further professionalize its products. The aim is to keep its quality standards high, improve close relations with clients and keep overall cost of production to a minimum. SPS plan to make long term investments in developing its work force and upgrading its production equipment.

Brains Behind the Tactics