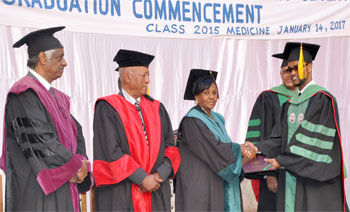 Before the discovery of modern medicine, life was fleeting for humans. The environment was replete with unseen dangers in the form of disease and medical conditions. Then medical practice changed into an organized profession, and humans experienced a significant improvement in the quality of life. Aided by modern scientific innovation, the boundaries of medical technology extended to unimaginable limits. Nevertheless, even with all these technological innovations, the position of doctors in society hasn’t diminished; doctors remain indispensable.

Just as 6 classes did before them, the 36 members of the Orotta School of Medicine class of 2017 received their degrees and took the Hippocratic Oath as new medical doctors in the colleges 7th commencement ceremony held Saturday, January 15, in Asmara.

Generations of Orotta medical students don their white coats and stethoscopes each September, transforming from lay persons to physicians. Yet, underneath the usual uniform sea of white they wear, beat thirty-six different hearts, thirty-six different truths. As we discover their individual curricula, research projects, and mentors, they uncover unique passions. Eight (or more) years later, they graduate not only as doctors, but also as scientists, policymakers and writers.

There is an old saying that it is better to be lucky than good. True or not, there is certainly a lot of serendipity in life. But Louis Pasteur, a French chemist and microbiologist, had a different take. He said, “Chance favors the prepared mind.”

When I think about what the ceremony represents and look into the eyes of the graduates, you can see they were not struck by a sense of victory, or a feeling that they’ve reached an end. Instead, they were terrified by how much they still don’t know, and overwhelmed by the weight and responsibility inherent in this ancient title of “Physician.” But these were brave young men and women, who were born for the profession, who strode through the arduous and daunting task of completing eight years of medical school.

These were such an impressive pool of medical school attendees. From the first day of medical school when they were introduced to their cadaver, they have endured countless lectures and lab hours, physical examination and sensitivity training sessions, and ward rotations under the watchful eye of senior residents and attending. Today, they will hold something that few people are privileged to sign behind their name: the letters “M.D.” This time in medicine is both a particularly exciting and particularly challenging one for doctors. How they deal with these challenges will determine their staying power in the profession.

Medicine bridges the gap between science and society. Indeed, the application of scientific knowledge to human health is a crucial aspect of clinical practice. Doctors are one important agent through which that scientific understanding is expressed. But medicine is more than the sum of our knowledge about disease. Medicine concerns the experiences, feelings, and interpretations of human beings in often extraordinary moments of fear, anxiety, and doubt. In this extremely vulnerable position, it is medical professionalism that underpins the trust the public has in doctors.

Eritrea’s development aspiration is to achieve rapid, balanced, home-grown and sustainable economic growth with social equity and justice, anchored on the self-reliance principle. Moreover, the Government places emphasis on community and individual rights as well as issues of social justice, such as access to education, health, food and equitable access to services regardless of locality. Based on the sector-specific policy documents, national priorities focus especially towards; food security; education; health; access to portable water at reasonable distance: roads and infrastructure development; environment and natural resources management; human and institutional capacity development and; information and communication technology. These all support concrete and measurable improvements in national development programs.

As part of this policy, Eritrea over the last decade has been able to constantly produce a new generation of health alumni. Part of the main reason for this continuous success in the health sector can simply be attributed to common-sense policy making.

Speaking at the ceremony, the Minister of Health, Ms. Amna Nur-Hussein, explained that the government has been striving to produce competent health professionals and scholars who are equipped with requisite knowledge, professional skills, attitudes and ethical principles to address the national healthcare needs of the country.
The Orotta School of Medicine and Dentistry which was established inside the national referral hospital, Orotta, was first opened in 2004 with only 32 students by offering an eight-year course program in Medicine and a seven-year course program in Dentistry.

Speaking his part, Dean of Orotta School of Medicine and Dentistry Dr. Haile Mihtsun, noted, rapid advancements in medical sciences have equally accelerated the development of health services worldwide, as a result such strides in medical fields has put the necessary conducive environment to produce capable health professionals.

The overall goal for the health system in Eritrea as articulated in the Health Sector Strategic Plan Development Plan (2013-2016) is the improvement of health status, general wellbeing, longevity and economic productivity for all Eritreans. Accordingly, over the last few years, the country has achieved remarkable progress on basic health indices. Key among them includes significant reductions in maternal and child mortality ratios, and HIV prevalence. In the period since independence in 1991, access to healthcare within a radius of 10 kilometers increased from 46 percent to a whopping 78 percent, while over 60 percent of the population enjoys access to health care facilities within a radius of 5 kilometers, leading to a substantial improvement in the access to and utilization of quality and timely healthcare. It is a given fact that Eritrea met all the health MDG targets well before the 2015 deadline.

Eritrea has a positive and unique story to tell about health related Millennium Development Goals (MDGs). Eritrea is one of the few countries to have achieved the MDGs in health before the given deadline date. So much so, the U.N. never failed to express its praise to Eritrea for its successes in public health. Its health statistics are much better than many of its African counterparts. Infant and child mortality rates are lower, vaccination rates are higher and Eritreans have better access to healthcare facilities. The government covers the hospital bill for people too poor to afford care. New clinics have been built across the country and healthcare workers travel to villages to advise and educate locals, deliver supplies and provide vaccinations. Eritrea has made some major progress in improving public health, a major victory in the fight against poverty.

In 2012, a total of 5,022 professional medical staff were employed across 340 health facilities (excluding military facilities). As well, recent associate nursing programs in the cities of Barentu, Ginda and Mendefera have trained 1,800 nurses, 2,700 associate nurses and 905 technicians.

And now, with the new adopted Sustainable Development Goals in place, with 2030 as the target date, the need to end poverty in all spectrums, achieve full gender equality, get every child to school and improve health services is more vital than ever. Eritrea’s previous successful commitments to achieve UN development goals, need to become a stepping stone for advancing national development. For this to happen, the day to day obstacles and challenges need to be faced head on by the consolidated efforts of skilled Eritrean professionals.

The graduates recited the Hippocratic Oath, historically taken by physicians and other healthcare professionals:

“…………..To consider dear to me, as my parents, him who taught me this art; to live in common with him and, if necessary, to share my goods with him; To look upon his children as my own brothers, to teach them this art; and that by my teaching, I will impart a knowledge of this art to my own sons, and to my teacher’s sons, and to disciples bound by an indenture and oath according to the medical laws, and no others……….”

Everyone in this audience had played an immensely important role in helping them to achieve this lofty goal of becoming doctors. The dedication of Orotta faculty, the caliber of the teaching, the importance of its research, the quality of patient care and the effectiveness of its leadership have all earned Orotta Medical School enormous respect and admiration across the country. There has been plenty of sacrifice along the way and there is plenty more to come. Without the devoted support of their families, partners, mentors and friends this would have been a very different journey, and much less fun. These proud parent and friends, the next time they’ve got an irregular bowel movement or an itchy patch of skin, they’ve got a favor they can call in.

There is simply no denying that doctors are important in our society. Two of the top things that we value are life and health and doctors have the knowledge and skills that put them in a position to help improve our health, treat our illnesses and prolong or save our lives.

As human beings, we tend to be bored with the obvious from time to time and healthcare practitioners at some point feel the monotony and the routine that one may call “adult life.”

I suspect the repetitive and memorization-based nature of the medical curriculum can be hard to cope with each and every day. Through it all, it’s important to reconcile what you believe in and why you do the things you do.

People choose this profession and this lifestyle because they believe in something. Sometimes that belief is in healing humanity; other times it is in their own ego. Let me part with you in the words of the late David Foster Wallace:

“…here’s something else that’s weird but true: in the day-to-day trenches of life, there is actually no such thing as atheism. There is no such thing as not worshipping. Everybody worships. The only choice we get is what to worship. And the compelling reason for maybe choosing Jesus Christ or Allah, or some inviolable set of ethical principles — is that pretty much anything else you worship will eat you alive. If you worship money and things, if they are where you tap real meaning in life, then you will never have enough, never feel you have enough. It’s the truth. Worship your body and beauty and sexual allure and you will always feel ugly. And when time and age start showing, you will die a million deaths before they finally grieve you. On one level, we all know this stuff already. It’s been codified as myths, proverbs, clichés, epigrams, parables; the skeleton of every great story. The whole trick is keeping the truth up front in daily consciousness.”

Why you should Travel to Eritrea this Year Part II