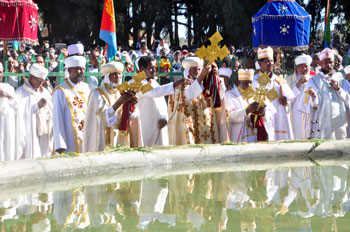 The celebration here in Asmara in which thousands of the faithful participated; a night long prayer was conducted in all Churches. A prayer service was also conducted at the Epiphany Holy water spot headed by Abune Lukas, Secretary General of the Holy Synod.

At the occasion Memhir Elias Habtai gave briefing on the historical background of the Timket Holiday.

The G. D. of Administration and Finance in the Central region, Mr. Berhane Negash, senior Government officials as well as other invited guests took part in the celebration.