Hamelmalo on a steady development 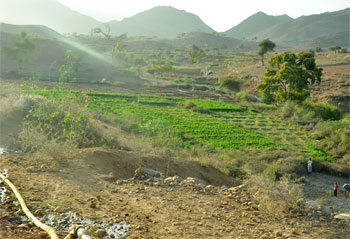 Uneven development is one of the major problems in the third world. We see glittering development at the centers, along with sky scrapers, impressive transportation and communication service etc. On the other side, if you go outside the main cities you discover a different scene. Even in some countries, there are areas that lack central government’s effective penetration due to different reasons and they become a hub for illegal activities. This reduces the public tax base, low social service provisions and in effect minimizes legitimacy of the government that leads to resistance and political turmoil.

Meanwhile, many states have taken lessons from such kind of problems and their own experience. Eritrea can be mentioned as an example. The access to equal development belongs to all Eritrean nationals who have helped the country to achieve independence and safeguard it. The determination for equal development is clearly set in the national charter. This issue is an attempt to observe and assess the transformation of Hamelmalo subzone in Anseba region and the effects of the implementation of development projects on the beneficiaries.

Hamelmalo sub-zone is one of the eleven sub-zones of Anseba region encompassing forty-two villages having more than forty thousand inhabitants organized in nine administrative areas. Most of the people’s livelihood is based on agricultural activities and others are engaged in horticulture and trade.

Before independence, the area around Hamelmalo, especially the town itself hosted an Ethiopian military base. After independence, however, the Eritrean government’s effort to narrow the gap between the center and the peripheries yielded positive results. Besides restructuring the administration, the government also worked to rehabilitate the war-torn economy and thus the economic life of the area begun to advance. Hamelmalo started to develop from this time onwards. It has shown great transformation and within 20 years a lot of social service institutions have been established. For instance, before independence, except the elementary school that was in Lebena, there were no schools. But today there are 27 schools of all levels up to high school and every administrative area has its own school.

With regard to access of higher education, the Hamelmalo Agricultural College is found in this sub-region and plays a facilitative role in the process to identify, plan and implement the socio- economic and environmental projects people are in need of.

Student’s enrollment in this sub-zone, and particularly female enrollment, is increasing steadily, thanks to the awareness raising campaigns.

Health is indispensable for any society. As part of the health ministry’s timely plans to provide quality health care services, there are three health care institutions established in this sub-region: one in Hamelmalo and likewise in Fredarb and Lebena. The population’s awareness has grown due to regular sanitation and hygiene campaigns and they are able to report if any new diseases are witnessed in their area.

Malaria is the most serious disease that appears in the sub-zone and the community and Health ministry are tirelessly working to control the infection. 80% of Hamelmalo population gets potable water supply. Areas such as Gizgiza administration are a bit far from the other administrative areas and it is possible to have access of water supply from as far as 15 km. Further, with the collaboration of Ministry of Health, the sub-zonal administration is working to solve the health service problems of the region.

When the process of gathering the scattered villages is finished, it is expected that all of the people of Hamelmalo will have access to clean water supply. Hamelmalo is 15 km north of Keren. The main source of clean water to the region is the Anseba river basin. Given the setting of the river basin, it is believed that there is a great potential for agricultural growth and development in the future.

Taking into consideration to the transportation and communication sector, while the Harat transportation company hasn’t yet assigned buses, there are private buses working on the route of Keren. For the time being, transportation is not a challenge for people in the sub-zone. Unlike the old days where people needed to personally travel to deliver their messages and deal with their business, communication technology has made it possible for the people of the region to have access to the mobile telephone network.

Keren was the only center of market for the population before independence days, they were compelled to go to there for shopping. But post-independence, they established their own shops and market areas and started to get goods and other services from their locality.

Gathering scattered small villages into one is the focal program of the government to make it easier for social service provisions. Hamelmalo sub-zone is one of the Anseba sub-zones where this program is being implemented extensively. However such programs were not completed as planned and are expected to be completed by 2017.

Wazntet, Genfelom, and Zron are some of the administrative areas where regrouping of villages has been carried out. To facilitate this program the sub-zone’s administration is working jointly with the regional administration in preparing the necessary infrastructure.

The government is working to provide basic necessities such as transportation services, educational and health institutions, and clean water supply. But despite these ongoing efforts, it there are still shortcomings that need to be overcome. The people of Hamelmalo are persistently engaged to make full use of their opportunities and resources so they can overcome their shortcomings gradually.