Why you should Travel to Eritrea this Year…Part III & Final 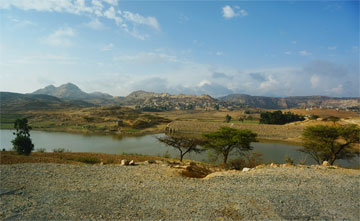 In previous editions of Eritrea Profile, various reasons were given on why to choose Eritrea as the next 2017 trip of the year. Indeed, treasures are indefinite and remain undiscovered, which is what gives charm to Eritrea combined with its people and their hospitality enshrined within the culture.

After having discovered the Capital City Asmara, followed by a road trip down the port city of Massawa, let’s go back to the highlands to visit other sites.

As readers may remember from our last issue, we mentioned the remains at Dahlak Kebir Island, as well as the importance of the ancient Port of Adulis as the main trading site in Eritrea’s ancient history. In fact, the port of Adulis was linked all the way to Qohaito and Metera. Some may like to continue down the road towards the Southern Red Sea, passing by Ti’o and its transparent waters, and along the coastline to the second port city of the country: Assab.

Let’s first visit the Southern region, locally called Zoba Debub. This region, besides its abundant and various production of cereals and other foodstuff, boasts a scenic green landscape especially during the rainy season.

But let’s go back towards Asmara and reach the Southern region by taking a different route, the Fil Fil one, which offers the opportunity to adventure the wildlife of various bird species, baboons, as well as multiple beehives on the side of the road. Many visitors would enjoy to stop over for a coffee ceremony at one of the recreation sites or perhaps a group of youth will invite you to join them at their “gibija” or “get together” around a barbecue by the National Park of Fil Fil Selemuna.

Going back to Asmara, one can reach Dekemhare, located about 40km from Asmara, which is an ideal destination if one is looking for a quiet town with rich and fertile countryside. In fact, the town used to be one of the favorite settlements of the Italians. For that reason, there used to be cabarets, villas, as well as grapes for wine and other fruit and vegetable productions.

The town and its landscape is a must see for photographs. Dekemhare itself has been the battlefield of offensives and a decisive one in April 1991, the last before the EPLF achieved the total liberation of Eritrea a month later.

The road continues and baobabs start to draw the horizon between agricultural fields, little lakes and valleys all into a green scenery for the pleasure of one’s eyes. These are signs that you are approaching the town of Segeneiti, known for its immense trees standing tall for centuries which are also represented on the five Nakfa banknotes. It’s definitely time for a short stopover for a picnic under one of those impressive baobabs.

After a short break, the road trip continues and one of the major cities of the region, Adi Keih, welcomes travelers with immense buildings of the higher institution of learning, the College of Arts and Social Sciences, where future political scientists and archeologists pursue their studies. The city is growing. Due to its location near the border, many buildings, such as the Orthodox Church, were bombed during the border war of 1998-2000, but have been recently restored.

The Saho and Tigrinya people have been living in harmony for centuries and the area is a treasure to history and archeology fans. Indeed, hundreds of sitse and remains of the ancient history of Eritrea are to be seen. Of course, very few visitors take the time to actually come to this region and explore this region and this is why, I think, readers, in planning your next trip, make sure to add this region into your to-do list!

About twenty minutes more and the curiosity of tourists will be satisfied after seeing pillars standing in the middle of a valley. Qohaito, that is. The pillars encrypted in Geez language are known to be pre- Axumite settlement and are parts of the Temple of Mariam Wakino.

Also, other archeological sites such as the Queen of Sheba dam can be seen. It is estimated to be a place of worship dating back to the 400-500 BC. For those hiking lovers, after a short walk, the edge of an immense canyon, remains of human settlements, farming areas and terraces can be seen.

Many other sites and underground caverns with different scripts cannot be missed in the actual town of Senafe, formerly called Metera. For the athletic, after a one-hour of hiking towards the iron cross on top of Amba Metera (Mt. Metera), the effort will definitely be worth it upon arrival at destination! In addition, in Senafe, there are numerous archetypes to be seen, such as a five meters high obelisk decorated with inscription from the 3rd century. There are in fact many excavations are still underway.

Local inhabitants will be delighted to tell visitors the story of the region and how Metera was a point of passage in which it is believed to have an underground route linking to Axum. While looking around, you will be amazed by the landscape and, far away one can observe the highest mountain of Eritrea at 3018m above sea level, Mt. Soira, locally called Emba Soira.

The region has many other sites to explore, including the monastery of Debre Libanos, founded by a Syrian missionary Aba Meta’e and located more than 25km from the plains of Tsorona. The amazing thing about this monastery is definitely its location. Right within the mountains, the monastery is immersed within the shape of the mountain rocks of high altitude (2275m). In other words, it is perched on the edge of a mountain under the Ham plateau.

According to the Ministry of Tourism handbook, the church contains the “golden Gospel” a bible covered with metal which contains copies of land charters dating back to the 13th century, as well as mummified bodies. Such kinds of monasteries are plentiful in the country, such as Debre Sina, Debre Bizen or Tsaeda Emba.

Between monasteries, old mosques, archeological remains, art-deco architecture, various landscapes between the lowlands and highlands, the color of nature, the cultural wealth and hospitality, the safety and cleanliness of the country, as well as its untapped tourism potential are countless reasons why your next destination should be Eritrea this year.

Without doubt, through this three part series of articles depicting different areas of Eritrea and some tips on things to do, many more areas or activities were not illustrated, such as the Anseba region, the Gash Barka region, which is a hub of development projects, and this historic sites of the armed struggle in Nakfa.

Instead of giving you all the tips on why you should come to Eritrea this year, why don’t you book your trip and discover it through your own eyes. Seeing is Believing!