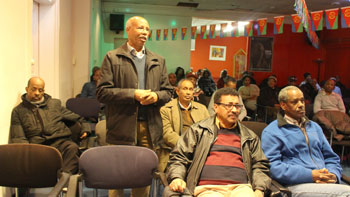 Ambassador of Eritrea to the European Union, Mr. Negasi Kassa conducted seminar on 15 January to Eritrean nationals residing in Amsterdam and its environs.

in Amsterdam and its environs.

Mr. Negasi gave extensive briefing as regards the economic, political and diplomatic achievements registered in 2016 and on the national development endeavors for 2017.

Pointing out that the external conspiracies to demonize the image of Eritrea have been foiled through the strong resilience of the Eritrean people.

The participants on their part expressed readiness to strengthen organizational capacity and reinforce participation and contribution for the success of the national development endeavors.

In the same vein, the Eritrean community in Juba, South Sudan, established 7 task forces in a bid to augment public diplomacy activities.

The task forces that were established during a meeting conducted on 22 January will be engaged in public diplomacy, media and research, legal works, professional and economic contribution, security and information as well as in national holydays activities.

Mr. Yohannes Teklemicael, Eritrean Ambassador to South Sudan, expressed his expectation that the task forces will make strong contribution in strengthening the organizational capacity of the community, for the implementation of the final and binding resolution of the Border Commission and for an end to the illegal occupation of sovereign Eritrean territories as well as for lifting the illegal and unjust sanctions imposed against Eritrea.

Likewise, the PFDJ branch in the North-Easter US conducted annual activity assessment meeting in Portland.

At the meeting the participants conducted extensive discussion on the reports presented and charted out programs for 2017.