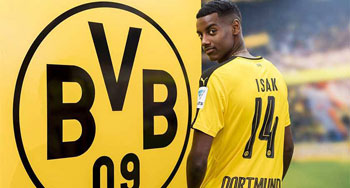 After being linked with a host of Europe’s top clubs, including Spanish giants Real Madrid, as well as Bayern Munich, Chelsea, Paris Saint-Germain, and Juventus, Swedish-Eritrean football prodigy Alexander Isak completed a €10m move to Borussia Dortmund from AIK Solna last week. The tall, wiry 17-year-old striker, dubbed the “new Zlatan Ibrahimovic”, had recently become the youngest goal scorer in the history of the Swedish national team after netting in a 6-0 win against Slovakia on 12 January 2017.

According to Michael Zorc, former Borussia Dortmund captain and current sporting director, “Alexander is a hugely-talented striker, who many top clubs in Europe wanted to sign. We are delighted that he has chosen Borussia Dortmund. Both BVB and the player himself are convinced that this transfer has great potential.”

While Borussia Dortmund coach Thomas Tuchel revealed that he was not directly involved in the signing of Isak, he noted that the transfer gave “the club a long-term planning security” and made “100 percent sense for BVB.” After Isak’s impressive first training session on 25 January 2017, a training match in which he scored two goals, Tuchel described him as “a strong centre-forward who also plays a good passing game and gets goals,” before adding “it’s a joy he’s here.”

This move is highly positive for a number of reasons. In transferring from the Allsvenskan (Sweden’s top division) to the Bundesliga (Germany’s top division), Isak has moved up a level (or two) and shifts to a league with a totally different playing style. These factors will force him to expand and strengthen his skills and significantly broaden his understanding of the game. For example, while the Swedish game is largely based on a fast, direct approach, Germany’s is more dynamic, fluid and technically proficient, with a greater number of better overall players.

Importantly, in joining Borussia Dortmund, Isak is joining a club with a long track-record of producing and developing young players. Currently, the Westfalenstadion is home to some of the brightest young talents in the world, including Frenchman Ousmane Dembele (19 years old), Turkish Emre Mor (19), Germany’s Julian Weigl (21), Portugal’s Raphaël Guerreiro (23), and American Christian Pulisic (18).

Additionally, in recent years, the club has also developed exciting talents such as Mario Götze, Marco Reus, Robert Lewandowski, Shinji Kagawa, Mat Hummels, Henrikh Mkhitaryan, and Ilkay Gundogan, amongst others. The Westfalenstadion should offer Isak the chance to accumulate vital experience and the space to grow and develop. At this stage of his career, Isak is still unproven at the highest level and he needs to gain more experience, playing time and the chance to further refine his game. These opportunities would likely have been unavailable at some of the other clubs with whom he had been linked.

For example, had Isak headed to Real Madrid, there would have been considerable questions raised about his potential playing time, with the Bernabeu already home to forwards Gareth Bale, Cristiano Ronaldo, Karim Benzema, Alvaro Morata, Lucas Vazquez, and Mariano. One only needs to look at Martin Odegaard, a young attacking-midfielder, as an illustrative case. Odegaard, who joined Madrid at the age of 16 in January 2015 after turning down some of Europe’s super clubs, has made only one substitute La Liga appearance and left the club to join Dutch club Heerenveen on an 18-month loan deal earlier this month. Although it is true that Odegaard has gained extensive experience through training with Madrid’s first-team, he has not been given the opportunity to fully develop in matches – a key necessity for young players.

At BVB, Isak will likely immediately compete for opportunities alongside or behind the club’s superstar striker, Pierre- Emerick Aubameyang, a task made significantly easier by the imminent departure from BVB of 30-year-old Colombian striker Adrian Ramos to China, via La Liga strugglers Granada. In the long term (potentially even as soon as this summer), Isak may even represent a replacement for Aubameyang, as the French-born Gabonese speedster has regularly been linked with a big-money move away from the Westfalenstadion.

Beyond playing time, Isak’s move to Germany is positive because at BVB he will be shielded from the unrelenting demands and suffocating pressures that characterize some of Europe’s largest clubs. For example, Arsenal’s Mesut Ozil has described the intensity of playing for Real Madrid as “unrelenting,” while the club’s fans have been known to disapprovingly whistle at and jeer their own players, including former club captain and World Cup winner Iker Casillas, Gareth Bale, Kaka, and most remarkably, Cristiano Ronaldo. Last year, Real Madrid’s all-time leading goal scorer was booed by his own fans after missing several chances, despite scoring one goal and making another in the club’s win over Roma in the Champions League, while in several recent matches, Ronaldo was booed by Madrid fans, despite being awarded the Ballon d’Or as the world’s best footballer only last month. Obviously, such pressures and responses are hardly ideal for young players who will inevitably face challenges and dips in form.

For Isak, however, at Borussia the environment will likely be much different and much more conducive to his long term growth and development.

The club’s overall approach and its vociferous fans have attracted great admiration from around the world. BVB’s Westfalenstadion holds 81,000 fans and is home to one of European football’s great sights, the “Gelbe Wand” (Yellow Wall), a sea of luminous shirts, scarves and flags. Speaking several years ago, Borussia defender Neven Subotic noted that, “nobody has the atmosphere that we have…to have 25,000 fans behind the South Wall is the biggest difference to any club in the world.” Remarkably, even after losses, BVB fans religiously flock to the mythical south stand to serenade their team in a reflection of the club’s slogan “echte liebe” or “true love”. Such an environment can only help Isak fulfill his tremendous potential.

Finally, Isak’s move to Borussia Dortmund will be well-received in Eritrea, his parents’ country of birth. In Eritrea, football is one of the most popular sports, alongside cycling and long-distance running. European football matches are regularly broadcast on television and throughout the country children can be found on pitches and streets engaged in intense matches. Although Manchester United, Arsenal, Real Madrid, and Barcelona shirts have traditionally been the most commonly seen across Eritrea, it will likely not be long until Isak’s number 14 Borussia Dortmund jersey becomes most popular.

Can Someone Make The Popcorn, Please!