Can Someone Make The Popcorn, Please! 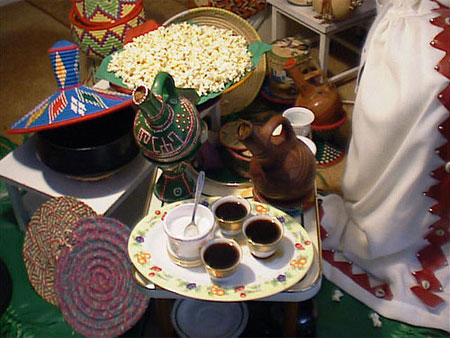 We used it a long time ago before the Americans came to notice it. We harvested it from a variety of red durra grown in the lowlands.

First you take the seeds or kernels and soak them in water. After some time you dry them and roast them without oil in a frying pan. Pop, pop they go as they swell up and burst open revealing their white and starchy interior. Embaba is the name of the final product, meaning flower, for kernels or seeds that now look like blooming white flowers on the frying pan.

Ours is not popcorn but pop-durra. It is smaller and less crunchy. Today they have been replaced by popcorn kernels from the USA and Europe.

“On what occasion was our traditional popcorn used?” I once asked my aunt who lives in the countryside and who is in her 80’s.

“Well, traditionally, it is used during coffee ceremony….”

“I know that!” I interrupted, “Can’t you remember of any other occasion on which it is used?”

“How about when taking care of a child stricken with measles?”

“Exactly, how forgetful I am….”

Poor Robel has measles and his mother knows that this simple looking ailment may entail facial deformation. So the child is, as it were, quarantined, with a plateful of embaba, candies and dates placed near his pillow. Probably to feed the good fairies who will take away the disease with them once and for all time.

But deep inside, little Robel is smug and happy. For he will eat all the sweet things alone without having to share with his brothers, who are sweating it out in class.

“Don’t touch Robel’s embaba or candies!” shouts the mother at the naughty siblings.

Robel is not allowed to open the door or the windows. Only red light is permissible in the room and even red bed sheets are displayed. I am afraid I don’t know the reason. I think measles can slip away only under cover of partial darkness.

During my investigations regarding our traditional embaba, I came to learn that the stuff has never been used in coffee ceremonies in the countryside in the past. If it was used, it was simply a practice introduced in this country by suwa and mies bar owners. Otherwise, embaba was used to feed the members of wefaro or volunteer groups that helped out in the building of hedmo (traditional houses), including weeding and harvesting.

If at present you witness the use o f embaba served after funeral services, this is also a new introduction. For in the past, only kitcha and coffee were served to those who came to pay their last respects in the das erected for mourners.

“Hana dear could you go and get embaba from the nearby shop?” asks a woman at the wake.

Hana returns clutching a plastic bag filled with embaba, but the embaba she brought are of different kind.

“No, no, no” says the woman slightly irritated, “You have to get the funeral ones.”

By that she meant our pop-durra. Our traditional embaba serve a different purpose now, they are mostly used in funerals.

“How about during special supernatural sessions held to please the possessed?” I asked my aunt.

She told me the embaba is used on similar occasions to placate demons or cater to the whims of the possessed.

Some women even use it to ward off evil spirits, especially during the New Year. You want to get rid of evil spirits that made your last year miserable? Toss some popcorn out the door and as the indoor imps or gremlins go out to collect the popcorn, the wind will carry them away.

Now let’s come to the ubiquitous popcorn. In the USA it is a big industry. One cannot watch TV without it. Cinema halls are littered with it and the bags that contain it.

“Did you enjoy the movie?”

“The best part was when you finished your popcorn.”

In Eritrea, it has completely replaced our embaba or pop-durra, and is now being used as confetti.

Women carry a plateful of popcorn to various ceremonies and throw it over brides, bridegrooms, visiting dignitaries, ministers, heads of states and unwary observers.

Popcorn is thrown about to enhance opening and closing ceremonies, during various public and religious feasts, not to mention child baptisms, birthdays, graduations, house-warming parties, arrivals of relatives from abroad (with more emphasis on those who come from the USA or Jeddah), departures of relatives (again with more emphasis on those who have come with lots of money), n’gdet (pilgrimage), and sometimes just for the heck of it.

Isn’t it a sin to throw away food just like that? After all, throwing away food is frowned upon in our culture. Who can eat it after it has fallen on the ground and been trodden under feet? Well, there are always cats and chicken which jump for it.

Besides, Eritrean cats relish it and get under the bed, under t h e t a b l e to find and gobble any stray popcorn kernels or runaway peanuts.

“It is not our tradition,” whines an old lady.

“It has already become one,” I try to convince her.

She continues: “What is happening to our society?

Men are plaiting their hair, girls are baring their midriffs, old men are running after teen girls, now they are throwing popcorn over brides, bridegrooms. Surely, the Bible does make mention of these days….”

Some people like to associate every newly arrived culture with the end of the world.

I asked a friend to tell me the exact day when pop corn was introduced in Eritrea. He told me that he was not sure but his guess was 50 years ago. The first cinema to use it was Cinema Impero. Now it has become a routine service for Cinema Roma. You go there with friends and you will have your bags of popcorn to munch as you follow the Premier League or Laliga game.

During the Derg time, when everybody was jittery because of the war, including the army, preparing popcorn inside one’s home, made some people nervous as the pooping sound was in many ways similar to the tat-tat of the machine gun.

“Did you hear that? They have started shooting. It is coming from that direction. I will call Tesfay’s family and will enquire about their safety…”

“Sit your damn butt! It is my wife. She is making popcorn in the adjacent room.”

A silence follows. A silence of shame!

The woman enters the room with the popcorn. If there is anyone who least enjoys the treat, it is the person who tried to call the family of Tesfay.

“Why is it that people never say no to roasted peanuts and popcorn? Observed a friend of mine one Sunday afternoon as we relaxed over a cup of coffee and salted and sugared popcorn.

“Do you know that we are living in the third millennium (civilized world) with a body that was meant to function in a stone age? Everything that feels crunchy in our month subconsciously reminds us of the reindeer thighbones that we used to crunch between our teeth lying in our caves,” I tried to explain.

That’s why people eat a lot of popcorn without being aware of what they are doing. However, a stomach stuffed with popcorn can lead to flatulence as well as a bloating sensation.

Now we have buttered, salted, sugared popcorn. We have it in Technicolor and in black and white. Served with dates, with candies, with peanuts, with bananas, with areki, etc. What won’t women do to impress visitors and enhance festive mood?

Well, like it or not, popcorn seems to have replaced our tradition embaba- which more or less is now used in funerals-and is here to stay, with or without candies or dates.

A Long Love Story of Solidarity