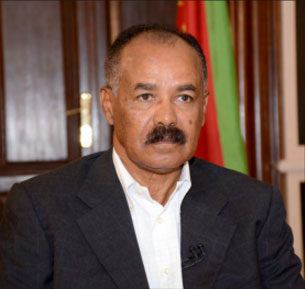 In the second day of his interview with national media outlets on Saturday evening, President Isaias Afwerki dwelt mostly on important regional and global issues.

President Isaias also described in greater detail current urban housing problems and the GOE’s planned schemes that are aimed at addressing, incrementally, the prevailing acute shortages in the capital and other urban centers.  President Isaias also described the broad contours of the constitution drafting process underway and associated efforts to strengthen the PFDJ.

In regard to international and regional realities, President Isaias explained in depth the various conflagrations that have erupted in the past 25 years in the Middle-Eastern, North Africa, the Horn of Africa and other flashpoints of war and conflict.  Misguided policies anchored on domination and hegemony in a uni-polar global order were largely the causes of these costly upheavals, President Isaias underlined.  Eritrea has also been ensnared in this whirlwind and compelled to face unwarranted border wars, sanctions and harassment under the spurious pretext of “human rights violations”.

In regard to the political crisis in Ethiopia, President Isaias stated that the spontaneous and extensive public protests were spurred by dangerous policies of institutionalized ethnicity and fragmentation pursued by the TPLF regime and its backers so as to monopolize power by fomenting division.  The regime’s futile attempts to attribute the crisis to external scapegoats and blame Egypt and Eritrea was disingenuous and largely meant to deflect attention from the quagmire of its own making.

President Isaias also spoke about the elections in the US as well as emerging trends in Europe describing these events as a “phenomena” linked to imbalances and inherent flaws of a unipolar global order.