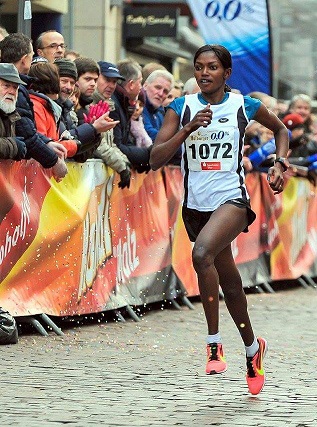 IAAF rightfully holds the two times unbroken record of Nazret Weldu labeling her the Eritrean Gold Label. She has done Eritreans and especially Eritrean sport fans very proud in several international races. We have here with us Eritrean female gold medalist upon her return from a Huston half marathon.

Welcome back home, how was the half marathon?

Thank you. It was great actually, but I didn’t score as well as I had hoped for. I was trained well and was in a good shape; good enough for a medal at least. Unfortunately, I am not good in running in places with high altitude, the level of my internal body fat makes it hard for me to run in mountainous areas. However, I had a good game, I had my overall condition in good shape until the race and was speeding as I had passed the 10 kilometer distance. I finished the half marathon at 1:14:52, in 15th place.

Okay. Let’s go back a bit and do tell us how you got in to athletics.

To begin with I had small interest towards sports in general. I was member of dance cultural, and my instructors always told me that I could do well in athletics. I had never thought about it before, but they ended up convincing me to race in a 400meter race, I got in first place.

By the end of 2004, there was a qualifying contest in Barentu and there I once again got in first place. Afterwards I joined the Gash Barka region sport club called Setit. At the time the club consisted of around 60 very promising athletes; I regard my time in the club respectfully as that was the place where learned the basics for running and for the athlete I am today.

From there I went on to Central Region’s Mereb Sport Club, where I currently am a member to this day.

It is very hard, especially since our community wasn’t supportive to sportswomen. I can dare to say that, the understanding of our society about sportswomen nowadays is a lot better than before. Let’s take my family for instance, they strongly wanted me to quit athletics, they had no idea that I could achieve this much. I remember, they used to come all the way from Barentu to take me home from my trainings in Asmara. But I and my trainers tried hard to convince them every time they’d show up.
It took me a lot of time and dedication to make them understand and eventually make them feel proud every time they glance at my trophies, now my family is biggest support system.

The key to brake convictions and to get to where you want to be is to be patient. There were a lot of great female athletes that started with me and they had potential however they were unable to make their dreams come true because of these common obstacles a girl faces.

The instances are many. I remember, once there was a cross country race in Kenya, where the national team ranked 3rd but ever since we are not able, to this day, to repeat that kind of score and it has been years. What I am trying to say is that we have very strong athletes among us in the community, however we do not back their potential.
We are going to have a qualifying race for the world cross country on the 18th in Uganda this month, and I just hope to see a whole team to participate in the competition.
Of the courses you have taken.

I got a scholarship in 2007- 2008, an interrelated course aimed at enhancing our technical and scientific approach to athletics, I eventually became one of the top athletes selected to join in an 800meters race for the Olympics grading in Spain. However despite my hard work I failed the grading by just two seconds. Education is undeniably very instrumental so I use what I learned to upgrade my proficiencies through constant trainings.

What are some of the countries you went for competitions?

I went to Tanzania in 2005, I ranked 4th rank and I was a gold medalist in Kenya. I have a collection of 4 medals in Khartoum which two of them are gold, from Djibouti we came back with several team medals… and so on. Most remarkably though, China is where I had the honor to be the Eritrean gold label for the first time. I went Europe, America and Latin America, you name it, and most of the time came back with several medals as well.

I heard that you professionally race in several types of athletics…

Basically I participate in many: track field, road running as well as half marathons. Nevertheless I want specialize in half marathons and marathons, I have great love for it and I am well convinced that I can do well in that field. This year, I am actually scheduling for a marathon.

How do I do it? … I have one good trainer! Trust me I am not saying this because my trainer is my husband, he knows exactly what I am capable of. It is hard to shift from long runs to short ones, you need to warm up your body and adopt it to gradual changes.

My trainer schedules my trainings with those of the male athletes to develop my endurance. The good thing is that my speed is a natural endowment and with training I acquire management of it. My trainings are engineered to best level of efficiency as my normal training includes that of speed, endurance and distance. Which is why it is easy for me to score high in different distances and types of races.

But you have great scores in track field races, why just not stick to it?

Yes you are right that could be the safest for me. However I went on to marathons because I was not satisfied with track races. That’s where my heart is.
Truth be told I kind of had an angry instance that prompted me to quit track, and that is when during a qualification race for the Olympics, track failed me by few seconds despite my high conviction.

Do you plan to go ever do run track again?

Yes. Yes I do plan to, one favorable day.

You said you haven’t competed in the Olympics yet?

Good luck! How do you manage to be a wife and an athlete at the same time?

It can be difficult at times, but if you have your mind set up to do anything you want then you can accomplish. There is absolutely nothing that can stand in your way; my husband does help a lot, he knows the conditions of my profession so he helps with the training schedules

During trainings, I think of my husband simply and professionally as trainer. Back at home I am an ordinary housewife, I want to do house chores but my trainer of a husband wants me to rest, our fights consist mostly of this specific aspect, but then again that is just a wife’s life, isn’t it? … He wants me to work hard and doesn’t spoil me at all, which I think is the reason of consecutive successes so far, in fact I have a Marathon scheduled for October following that of the World Champion.

Thank you again for having me on your page, God willing, I plan to set a new record in either a half or full marathon.

And I also have a message for fellow female athletes; I want to remind them that they can be the best we’ve ever had, but then again I need them to have a clear vision and work hard towards realizing it.