Zoom on the Mining Sector in Eritrea 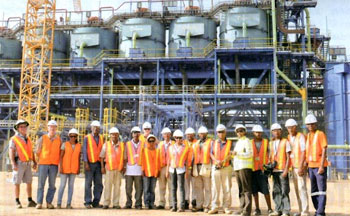 Truth of a model against received ideas and propaganda

This article was published on the issue of Hommes D’Afrique Magazine on January 2017. The well-known magazine which circulates in a number of countries, has took focus on the booming development of the Eritrean mining sector, contrary to what the international media regularly portrays.

Received ideas are having a hard time. And a lie has numerous versions, especially when someone denies it.

The truth, on the contrary, has only one version. It may shock us, but it is neutral by nature. The person who told the truth and the subject of that truth merely confirm this sole version. Listen though to this:

“For me, this visit has opened my eyes. The mine in Bisha is modern, well managed and currently employs 1400 people, of whom 90% are Eritreans, 20% of the employees are women and the mine in Bisha creates job opportunities for those living in the neighborhood, who without this mine would never have had the opportunity of having paid employment. Whose words are these? Where is this beautiful mine in Bisha?

Let’s continue to listen: “The majority of the residents of the adjacent towns and villages are subsistence farmers and shepherds. One woman, who had started as a cleaner, is currently driving a heavy Caterpillar (manufactured in the USA!) to transport raw copper to the crushing units. That’s what I call creating opportunities!”That’s not all.

“The mine also pays some of the highest salaries in the country and the employees have personal protective clothing and equipment similar to those in the West and the safety regulations are equal to anything you will find in Canada or the USA”.

These are the recent words of Louis Mazei, Head of the US Mission in Asmara, Eritrea, the country where this admirable mine can be found. This evidence, which you don’t expect to come from the mouth of a Yankee official speaking about Eritrea, proves that despite the tornado of propaganda, the truth never dies.

The truth here is that the Eritrean mining sector in many respects is a model, which many African countries should imitate. That’s why this edition of our magazine, Hommes d’Afrique, has zoomed in on this sector of the Eritrean economy.

In Eritrea, mining is governed by a set of four texts: The Mineral Proclamation N°68/1995, The Mining Proclamation 165/2011, the Proclamation of taxes on mining revenue and the Regulations on Mining Operations N° 19/1995.

Here are a few key elements of the contents of these four texts:

• There is no tax in Eritrea on dividends in the mining sector.

• A tax of only 0.5% is applied on the import of mining equipment.

• Freedom of repatriation of the benefits.

• Possibility to have accounts in different currencies in Eritrean banks.

• One sole office acting as governmental spokesperson to successfully complete its mining activities, from its creation to its current operations.

• All mining resources in Eritrea belong to the State.

• Possibility for a mine with foreign capital operating in Eritrea to open an account in a bank overseas.

• The need to protect the environment.

You never hear this kind of proposal in Eritrea. Why not? The answer can be summed up in one word: propaganda. What is its aim? To weaken a target, to organize chaos not only in its mind, but also as much as possible in the surrounding territory. “The organization of chaos” is precisely the title of the first chapter of a book published in 1928, by the pioneer in the study of propaganda, Edward L. Bernays, which he simply called “Propaganda”.

Many African countries are victims of the propaganda dumped by the media which dominate the world, western media. In Africa all they see is misery, corruption, war and famine. Don’t let’s worry any more. They’re used to it. It’s up to us, just like this mining enterprise in Bisha, to concentrate on what we have to do for the good of our continent, Africa.