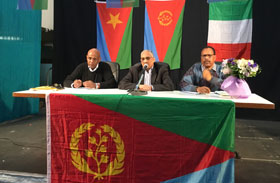 At the seminar the Eritrean Ambassador to Italy, Mr. Fesehatsion Petros conducted to the Eritrean nationals residing in Bologna on 29 January said that in the past 25 years Eritreans living inside the country and abroad have demonstrated strong unity and resilience in foiling the external conspiracies against the homeland and that the achievements registered in different sectors have been the result of that.

Ambassador Fesehatsion also called on the nationals to reinforce participation for the success of the development programs of 2017.

In the same vein, Eritrean nationals residing in Hamburg, Germany, conducted a meeting on 28 January aimed at augmenting diplomatic activities.

Mr. Yohannes Weldu, Charge d’Affairs at the Eritrean Embassy in Germany, gave extensive briefing as regards consular activities, strengthening the Eritrean community and on other issues of relevance.

The representative of the Public and Community Affairs, Mr. Kahsai Tewolde on his part pointing out that commendable activities have been conducted as regards the redemption of the Nakfa currency, public diplomacy as well as for lifting the illegal and unjust sanctions against Eritrea, he called on the nationals to strengthen organizational capacity and back up the national development programs.

Likewise, Eritrea is participating at the 48th International Book Fair in Cairo that is taking place from 26 January to 10 February.

According to reports, 850 publishers and distributors are taking part in the book fair and Eritrea is participating for the third time through the Eritrean Embassy in Cairo.