“Eritrea Has to Make Our Help Unnecessary” 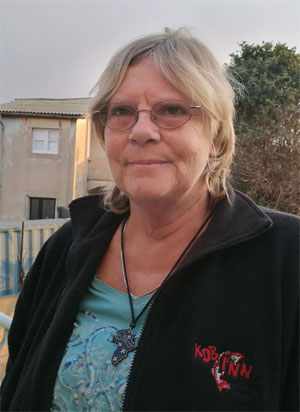 -Dedication, passion and compassion are words among many others which can describe Dr. Traudl Elsholz, a woman with a strong vision of what development means and what teamwork means in achieving successful results. These are the values that Dr. Traudl shared with her students, colleagues and friends while working in Eritrea for the last 6 years at the College of Health Science and local hospitals. As her farewell approached, it was a must for Eritrea Profile to hear her story. Here is a snapshot of our conversation.

I am from Germany, from a modest family and as a teenager I was very much involved in the 68 movement in Europe. I used to go to different protests such as against the Vietnam War, showing my support to liberation movements and also went to some protests organized by Eritreans in Germany during the independence struggle.

I wanted to study medicine at first, but in Germany, studying medicine was expensive and very selective. Thus, I decided to firstly go for orthoptists and, later on, going into ophthalmologic. Well, I started working as an aid-nurse on night shift while studying during the day, I was immersed in the world of emergency and ICU and I realized how I was interested in intensive care and anesthesia. So, the work I was involved in during my studies is what drove me towards this field of intensive care medicine and anesthesiology which became my specialty.

I have always been interested on working in the African continent, so as soon as I could, I went to South Africa and worked at a hospital in a so-called ‘homeland’, a black township in 1993 until 1995. It was just before the election, so it was a very interesting period. I went briefly back to Germany and then I decided to work in France and I passed a French exam allowing me to work for governmental hospitals in emergency medicine, ICU and anesthesiology.

From 1998 to 2004, I went back to the African soil and worked in Uganda where I was part of a team in building up programs at the University of Science and Technology in Burara. I did postgraduate trainings for doctors and anesthesiologists as well as a course in anesthetics assistants and officers. I was also opening an ICU there. Again back to my old post in France, in the meantime, I became a lecturer for the WFSA, which is the World Federation of Societies of Anesthesiologists (WFSA) and we did short courses on trauma management and how you build up an ICU amongst others. Its first National Congress took place in 2004 in Asmara.

I was invited to give lectures at the congress with two other colleagues and during my time I met the late Saleh Meki, Minister of Health. He gave me a very good impression on the country. It’s at that time that I noticed how anesthetists were motivated and eager to learn more.

Later on, there was a pilot project to send two people from CIM, a German governmental institution on migration and development for two years to Eritrea to see if they can help with anesthesia and with ICU. It was a two years contract and I came with a colleague, Anja Schneider, an ICU nurse and myself as an anesthesiologist. We started working together with the newly graduated in anesthesia, we had a department with few masters and we made more emphasis on the practical side. The students were heavy headed but missed the practical side.

In those two years, we met with Martin Zimmerman (Head of ERA Germany), and there was a longstanding project since 1993 in health which started with Eritrean Relief Association in Germany by Prof. Dr. Spilker, he was inspired by Eritrean diaspora to come here and help, they had a memorandum of understanding with the Ministry of Health. Then again, Prof. G. Geldner took over in 2008 where he started helping with the Master of Sciences program in anesthesiology.

In 2010, I came back and we started that program with Martin Zimmerman and Prof. G. Geldner, the project ended after two years and I was supported by ERA to this day. Martin managed to raise funds through the Eritrea Health Association – EHD and with the support of a group called “Ilse Kröner-Fresenius Stiftung”.

My department was created within the College of Health Science here in Asmara. All colleagues were nice, cooperative and welcoming and the same applied with the Ministry of Health and colleagues from other hospitals. We don’t lose the context with the practice. So we have a half day at the hospital and the other half at the school. We also started an MSc program in anesthesia as well as ICU and nursing. These are very important courses for the country.

We trained according to the needs the Ministry of Health. We have a whole range of people aged between 24 and 58, as for those who were doing anesthesia during the war with little training and they did it and they are now enrolled in training to upgrade their knowledge. Besides, we have bachelor program in anesthesia, we are now in the 9th batch, and by now we have 87 bachelor graduates in anesthesia. When I came they were about 25 anesthetists in the country on diploma basis and about 12 expatriates mainly from Uganda, Sierra Leone and Rwanda. Therefore I think that the number 87 isn’t bad.

I was curious to see the country from what I heard about the history of it. I was pleased not just by the country but mainly the people when I first came in 2004. They were very motivated and keen to learn. You know when you are a teacher and you see students asking you to give more, to challenges you, that’s fun and inspires you tremendously. I was encouraged by the students. I actually had four farewell parties from the master graduates, the current students, colleagues and the college. I just love them.

When I got offered the job to install the department, I just couldn’t hesitate for a second and left my job on unpaid leave from my hospital in France to come here. I was actually supposed to stay here for two years but you see, here I am after 6 years and 3 months.

I think definitely Eritrea is the safest country of all the places I worked in. Speaking in terms of motivation of students and dedication, I am 100% sure that Eritreans are the ones. As a teacher it is rewarding to see students stimulus and the hunger to learn. In terms of development of the health system, of course South Africa is better off and in Uganda, only Kampala but outside of the capital, nothing compared to the case of Eritrea.

I think its developing slowly but constantly, if you look at the MDGs, Eritrea is one of the only country to achieve those in maternal health and child mortality. But I have to say the first time I came, I didn’t have a good impression on the situation of the health and specifically on anesthesiology in Eritrea. There was some standards which were not met, but I can see that over the years, in terms of anesthesiology, things have improved. I hope that my graduates will be the drivers of progress and I believe that anesthesia in Eritrea has become safer and more human.

People called me at night when they have critical cases at the hospital. It was very challenging. Some cases we lost, some we saved. I remember one young girl who was on a ventilator for more than three weeks, in deep shock and everyone gave up on her but we didn’t, we struggled for her. She then recovered and is now living, working in Asmara and she is completely healthy!

I have been working at different hospitals in ICU, maternity, and the main hospitals of Orota, Halibet, and Sembel. My contract is a 40 hours a week one but I never worked 40 hours my whole life. Between teaching at the School and working at hospitals.

They say “Are you crazy?” they have a complete wrong perception on Eritrea. Some even think that there are radical Muslims, that it is so dangerous. Even when we bring visiting lecturers, the first question in mind is: “Is it safe to go?” But honestly, if you compare it with Nairobi or Juba, well there is no hesitation and even now, if you asked me to walk at night in Frankfurt or Asmara, I definitely choose Asmara.

Back in Germany, I wasn’t happy about the hierarchy within the medical sector. For me medicine is a teamwork and if you think that you can do it alone it won’t work. You need the cleaner, the aid nurse, the doctor all working into one team. This is medicine to me and I didn’t want to live in this type of hierarchy where a doctor will think of himself superior than others.

The so-called developing countries should be at the same medical level as the developed ones in terms of health care, and instead there is a gap of about 30 years and its shouldn’t be this way. For me health is a human rights. Human rights is for everybody and not just for developed countries. So I am driven by a mixture of curiosity, willing to help and learning from other cultures and my passion to teaching.

My students are actually the role models, they are hardworking and smart. They are very motivated, what can you ask more? And they are very attached to their country. Many of them went for short courses to Germany and they came back. If they wouldn’t, I wouldn’t take them there if I didn’t believe in them in the first place.

Actually, what motivates my students is the possibility that they have to learn more and to enroll themselves in PhD Programs. They believe in the development of the country. These are the things that keep you here. I never met any of my students or colleagues who said “I don’t want to live here”. They are all attached to Eritrea but of course, inspiring them is imperative.

It’s important that Eritrea becomes self-sufficient and make ourselves not necessary. There are enough Eritreans who can do the job and we have many of them who already are teaching.

Of course I can come here as an anesthesiologist, do my job, make as many surgeries as possible and then go back. Of course, I will save lives but what stays in the country? So it’s better to do half of the patients and train people at the same time. I believe that we have people who can do the teaching and there are enough anesthetists now. So it’s not that sad that I am leaving as they can do it on their own.

I thank the Eritreans for their friendliness, their welcoming, their cooperation, Prof. Tadesse Mehari from Higher Education, my students who motivated me most. Prof. Ghirmai and Prof. Berhane, all for the cooperation and friendliness that made me feel comfortable here and made me stay. And I am glad to witness the progress.

You are most welcome.