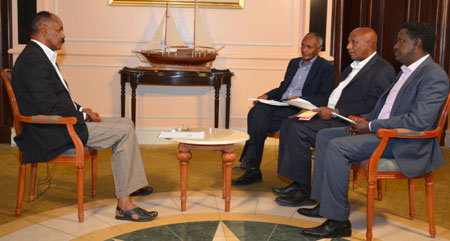 First and foremost I would like to convey my best wishes, even if somewhat belated, for the New Year to the Eritrean people at home and abroad.

Energy has for long remained a priority development program for the government. Indeed, electricity supply constituted the biggest challenge facing the nation’s development plans from the outset. The Hirgigo power plant was thus constructed almost immediately after independence early in the 1990s to catalyze sectoral developmental plans. For a variety of reasons, including timely maintenance failures, the status of the energy sector and electricity supply in the past few years have been dismal.

The main priority now is to embark on sustainable expansion of energy services. This will require both the development of new supplies and more efficient utilization of current energy resources.

Efficiency must be a core objective. The first measure taken to promote efficiency is to charge the real cost of energy. Secondly, major investments are being made to restructure the national electric power supply system. New, higher voltage lines are being installed in the electrical grid in order to increase transmission and distribution efficiency. The challenges of distributing electricity on a nationwide scale through a single interconnected system are massive of course. The notion of expecting the Hirgigo Power plant to provide electricity to far off areas such as Tesseney, Omhajer, Sel’a, Assab, Qarura, cannot be cost-effective and feasible.

The Hirgigo power plant was initially supposed to produce 120 megawatt of energy; output decreased overtime due to maintenance bottlenecks over the years. Now, installation works are underway for the 50 Megawatt generators that will be added to the system pursuant to purchase agreements signed with a Chinese company in the past. There is also a new, additional, project in the pipeline for 120 Megawatt diesel power generation. Electricity outages and shortages – the cement factory in Massawa could not, for instance, operate at full capacity – that affected our development plans in the past have thus been removed.

The cluster of agricultural and food processing factories in the Western Development Zone – notably in Gerset and Fanco, Kerekebet, Tessenei, Ali-ghider – other developmental programmes, Sawa.. etc, are currently receiving continuous electricity supply. This has been secured through stand-alone power plants in the region. Haikota, Akordat and Sel’a will be connected to this network shortly.

Eritrea’s energy strategy is also anchored on diversification. The options and prospects for renewable energy -.i.e wind, solar and geothermal – are good. The renewable energy projects underway are expected to bolster existing power generation by some 80 Megawatts. Solar energy is economical and utility scale wind and geothermal resources may provide a cheaper alternative to the current diesel-generated electricity. Recognizing this, we are investing substantially in solar energy development and in wind and geothermal energy studies. Geothermal energy development in Eritrea will have an important input in alleviating expenditure on foreign currency while safeguarding the environment from adverse impact of fossil fuels. The project will advance work beyond the survey stage toward eventual project development in the future. Given the key role energy has in maintaining and increasing the quality of life, these efforts need to be supported by all those involved in Eritrea’s national development process.

In summary, for an emerging, developing country such as Eritrea, alternative, renewable sources of energy represent an extremely effective component within broader national development goals, and they directly and positively impact the lives of our citizens. Our development plans are in place to support new projects while augmenting existing ones, in doing so we are hoping to raise the current 70-80 megawatt of energy produced nation-wide to 200 megawatts; 80 from renewable energy and 120 from the existing ones.

Investment in water infrastructure is another government undertaking of high priority. Initially, we have to secure the national demand for potable water, and then we need to have water for industrial purpose as well as livestock and agriculture. This is a scheme that has been in the works for a long while. Recently built Gergera and the Teqera dams (including Mai Nefhi) are located within the environs of Asmara. Good rainfall in 2016 has contributed in these dams amassing substantial amounts of water. But the crucial point of reservoirs is not amassing water; the issue is how to utilize it. We have also collected a lot in Kerkebet Dam. Over-all, in the years 2015-2016, these new reservoirs have harvested a total of 250 million cubic meters of water. But the challenge of the optimal utilization of the water harvested has not so far been fully addressed. There is another big project of dam building underway in Gahtelay. When this is finalized sometime in 2017, the aggregate volume of water collected will be around 300 million cubic meters. Our water infrastructure building scheme is intertwined with our approach of the three development zones; the West, the East and the Highlands. The water structures we build must ensure meeting the demands – potable, industrial and agriculture – in all the three development zones respectively. The issue of water is seized, by dividing it into three developmental zones. The West, the Highland and the East, and each of these zones are envisaged to be self-reliant. The Gergera Dam can for instance be partially diverted and utilized to supply Hazemo in view of the huge potential of agriculture and demand for water in that area. Simultaneously, we can build water pipelines eastwards to supply Korbarya and Dekemhare; westwards to cater for Mendefera as well as Tsilma. Asmara’s water needs can also be supplanted by similar network of water pipelines. In 2017 these reservoirs are expected to supply not only Asmara but also other urban areas. The Gahtelay project which is already in the pipeline is expected to be finished this year. This will distribute water, all the way to the Northern Border with Sudan to small reservoirs in the region, and is highly expected to provide secure water to the inhabitants of the region.

All in all, these three developmental regions have to secure water and continuous energy supply. Efforts to realize these goals will continue in this current year. We can confidently say we have the necessary projects already implemented or near completion that ensure the fruition of the aforementioned goals.

The building and maintenance of road infrastructure plays a paramount role in enhancing socio-economic development, commerce and greater interaction between the different national constituent groups. At the moment, road transportation is largely in reasonable shape, and it is the dominant mode of transportation for moving goods and passengers. However, there are acute limitations in air and marine transportation facilities which remain incongruent with the country’s locational advantages and endowments.

What we are endowed with and what has been put in place need to go side by side. This makes the rehabilitation and expansion of airports and ports imperative. In view of the stiff competition in the airlines industry, our focus initially will remain in developing the domestic and regional routes. Our developmental plans in the eastern and western zones must be bolstered by putting in place vital air transport infrastructure; notably through building/upgrading airports in Massawa, Sawa and Tesseney.

In terms of maritime transportation, the location of our two ports makes them well positioned to render services to a wide range of potential partners. Government policy in this regard is to increase the use of the two ports for the transit of goods, and to create, in the long-term, a transportation hub involving all modes of transport: liner transport: roads and railways infrastructures.

In general, our development efforts in energy, water, and transportation are closely correlated with the necessity to further improve our health and education sectors. In 2017, programs will be introduced that will provide better health and education opportunities to our citizens. It should be mentioned that Eritrea has witnessed commendable success in its health sector services over the years but, such success should not be a recipe for inertia or complacency; the need to continuously renovate and improve should be in place as well.

“Eritrea Has to Make Our Help Unnecessary”