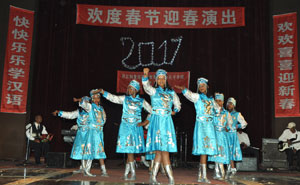 Confucius Institute, a school of Chinese Language and Culture in Asmara, has celebrated Chinese New Year on 3 February at Cinema Roma.

Asmara, 06 February 2017- Confucius Institute, a school of Chinese Language and Culture in Asmara, has celebrated Chinese New Year on 3 February at Cinema Roma.

At the event in which senior government officials took part, Mr. Yong Zigang, Ambassador of the People’s Republic of China, pointed out that the Chinese New Year is a popular holiday during which family reunion and companionship  is highlighted.

The Ambassador also underlined that in a bid to strengthen the existing mutual relations between the peoples of the two countries, the People’s Republic of China has offered scholarships for masters degree program to more than 40 Eritrean students. The Ambassador further indicated that the school of Language and Culture will organize summer students’ tour program to China and short term training will be provided to more than 100 students.

The event was highlighted by cultural and artistic programs depicting the culture of the two countries.