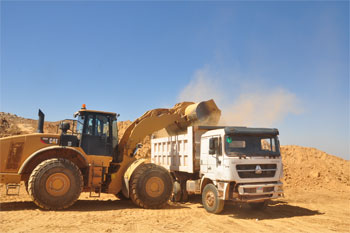 Easing the burden of road traffic in major cities are critical elements in ensuring safety, environment and economic productivity. Indeed, most of major cities in the world suffer from traffic congestion and pollution while being time consuming for commuters. Nairobi, Lagos or Johannesburg are examples of such congestion in Africa. The lack of infrastructure, well-maintained roads combined with mounting population in urban settings are all factors of road congestion. Eritrea isn’t immune of such situation and it is starting to show signs of road traffic issues in its capital city Asmara.

Without doubt, the increasing numbers of cars, taxis and buses taking over the streets of the city cannot be denied. However, with the new development and the booming mining sectors, trucks from the mining companies, heavy machineries and other means of transportation are circulating through the asphalted roads linking Massawa, Asmara to Keren as well as Tesseney. However, “there have been long experiences learned and evaluation taken over the years, the issue isn’t the road but the type of vehicles using it” said, Lt. Col. Engineer Getachew Merhatzion, Head of Mapping and Cartography Center. In fact, the initial construction of these roads were not planned for such heavy circulation and type of vehicles.

In context, one of the key elements to development is transportation and infrastructure and with this in mind, in the early years of independence, the number of asphalted roads increased. In fact, in 1991, only about 4,000km roads were asphalted compared to 14,000km in today’s Eritrea. The Asmara-Massawa road through Fil-Fil Selemuna, Massawa- Assab, Massawa-Gilbub, Barentu- Tesseney, Afabet-Kubkub-Nakfa, Massawa-Erafaile, are some of the largest road construction witnessed over the years. However, over past few years, the circulation from and to Asmara has become quite critical and a challenge that it is of importance to tackle the obstacle at its early stage so as to avoid major road issues in the future.

Thus, with its long term mission, the Government of Eritrea is currently working in a new ring road project surrounding the city of Asmara. The idea is to ease the traffic burden coming into Asmara and especially of heavy vehicles damaging the asphalted roads.

In number, more than thirty trucks from the Bisha Mining Company are circulating each day back and forth between Bisha through Keren towards Massawa passing by Asmara. One can imagine the impediment to the current road while sharing it with commuters and public transport.

Accordingly, after completion of the feasibility studies, the construction of the ring road is under way as in three month ago. At present major parts of the project have been completed. For my development column, it was a must to witness the progress and the future impact it will leave on communities, the economy and the environment. Therefore, a few days ago, I embarked into a fieldtrip to witness the project and also hear from those, whose lives will be impacted as well as those in charge of the project.

In the early morning hours, our guide, Lt. Col. Engineer Getachew, was awaiting at the door of the road by Bet Gergish area where bulldozers, loaders and workers were already actively working in enlarging the road and linking it to the path en route to Durfo.

This newly built road starting from Bet Gergish takes commuters directly towards Adi Nifas and join the road directly towards Keren without putting a step into Asmara. A relieve for the capital city. Thus, Eng. Getachew explained that heavy vehicles won’t pass by the capital any longer but instead join the other road through this ring road. He then showed me aerial view of the project and thanks to the aerial footage and updated data by the Office, the project was easily implemented while ensuring that communities in the surrounding won’t be affected negatively. The 12,5km long road is built at an embankment of 5m height to ensure that the road won’t be affected during the rainy seasons and its enlargement measures 20m. Already 9 converters have been installed within a period of one month.

While continuing the journey, I notice the number of workforces actively engaged. Between the truck drivers, the engineers, the loader drivers without failing to recall the freshly graduates on training and members of the Eritrean Defence Forces all working in unison.

While we stopped to take photos, I noticed that the driver of a heavy loader was a young woman. A good surprise. Obviously I approached her. As the only young woman among her co-workers, Ms. Hiba Yassin, 22 years old, seemed confident and well-trained.

“After Sawa I went to study at the vocational training in Afimbol, then Adi Halo where I learned the theoretical part for 6 months and after which I was assigned into this venture of building a ring road for my initial practical training and in the process become certified. I never thought that it was that easy to drive such a big engine but actually it’s like driving a normal car to me.”

Her confidence and pride was obvious and when I asked about the perception of youth and especially girls within the Eritrean society as well as the family pressure, she stressed:
“The youth, when we don’t know we tend to fear things or seeing it as too difficult, but actually once you learn, you realise that you can achieve lots”.

“I am actually the youngest and I have five brothers and two sisters. We live in Akria, a popular neighbourhood of Asmara. My parents at first didn’t believe that I am driving this big vehicle. They even asked me to show them videos while I was driving. Of course as a girl, many would think it’s just a man job and it is not the place for a woman to be, however, as you can see, I am working equally as my male counterparts and my parents accept it.”

In projects such as the road construction, water dam construction such as Gahtelay, Kerkebet among many other development and infrastructure projects, youth like Hiba are active participants. In fact, after completion of Sawa 12th grade, holders of certificates or diploma are given the opportunities to study in one of the vocational training in several subjects, one of them being within the heavy machinery department. Whilst, many graduates in engineering and related fields from Mai Nefhi’s EIT College take their practical internship in one of the nations on going national development projects or part of companies such as Bisha Mining, Zara Mining or Segen Construction to mention a few.

Moreover, witnessing different generations working hand-in-hand in building the country is rare to witness in today’s world. Nonetheless, the Eritrean reality differs. Ensuring that the people are actors of such development is primordial and consequently creates a sense of ownership. As a matter of fact, the local community living by the ring road is also involved in the project and to show their appreciation to the workers and members of EDF, a gathering was organised on the day of my visit.

The town of Adi Nifas, in the outskirts of Asmara welcomed their guests with traditional beverage and food, Suwa and Injera. Women from the National Union of Eritrean Women (NUEW) branch of the town as well as Akria branch came to help on the day for the pleasure of the community.

“The ring road gave us the chance to move easily to Asmara. We feel like we are part of the city now and the direct route through Arbi Rebu gives us easy access to the capital, we no longer feel isolated”, said the governor of the town, Mr. Mesgena.

Finally, it is safer for women and especially pregnant women to travel via this newly built road, and today, we want to recognize the youth working ardently to make this project possible”, Mrs. Saadia Mohammed, Head of NUEW Akria branch.

Surely, the ring road project is one needle in the ongoing development projects undertaken nationwide. Communities, young graduates, experienced professionals, members of EDF working on such project allow all layers of society to create a sense of ownership and be involved directly in the development endeavours of the nation.

For a Noble Economic Future in Eritrea!