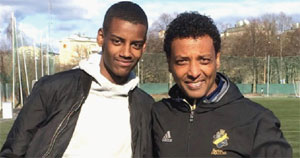 I started to play football like most people at a young age in my neighborhood in Asmara. Football and music was a big part of my family. At the end of 1970s we moved to Hanover, Germany as refugees. During that time we did not have dreams to empower ourselves and to be professional football players, rather our dream and focus was to see a free and independent Eritrea. Football was more of a hobby and we played it for fun. We were the first Red Flowers (Keyahti Imbaba) outside of Eritrea in Germany, and our focus shifted to playing music as well. We were very dedicated and we played every weekend in almost every city in the Diaspora for about 15 years sharing music for Eritrea and EPLF.

I played actively for over 25 years at different levels and with teams in Germany. In addition, every summer I also had the chance to play in big Eritreans tournament like Bologna and other cities.

Of course. Football in Europe is extremely developed. Technology, physiology and fitness are a part and parcel of modern football. And one does not just have to be a good football player to be a good coach but also has to master all these aspects of the game.

When I decided to work in football, I understood that the only way to be good or survive in the business of business was to get an education. I was obsessed to learn everything. I went from one course to another, reading books, analyzing football games and traveling to a lot of countries to learn from other teams. Fortunately, I was given an opportunity by a professional team. I am grateful to AIK (my Swedish team) for helping me with this growth process and allowing me different opportunities to contribute to their club.

I have to go back a bit to explain. In the early 1990’s, my brothers and I started a band known as Admas where we mainly focused in the music business. After Eritrea’s independence, we decided to make our dreams come true so we moved back home to Eritrea to start Admas Studios in Asmara, as well as in Khartoum, Sudan. Because I was responsible for the distribution of the music we produced, I stayed in Germany to work on behalf of the studio. One day on vacation, I met my wife who lived in Sweden, and we became blessed with two kids. I decided to move to Sweden.

In Sweden, the youth football system is directed mostly by parents. I never thought or hoped to be a football coach. However, because I was on the sidelines of the field following my own kids who were playing, an opportunity came along. One day at an event there were too many kids and too few coaches and the coaches there asked me to help. I responded by apologizing for not speaking Swedish, and one of the coaches said, “You don’t need to talk, just let them play.” That day was the starting point of my coaching career that has lead me to be a coach at AIK.

First of all I want to congratulate Alexander Isak and his family, as well as AIK and AIK Academy. Alexander was a very talented player; his strength was to combine individual techniques with extremely good understanding of the game. He listened very carefully and learned very quickly. He is not big in size but has great balance and timing in his movement. He really was a good striker. I could see that he had that little extra ability but it was difficult to see how his future would be.

Now we can see that he is a great player with a big future. Many of our academy coaches had the chance to work with Alexander and they all had some impact on his football. He even had a good personal coach prepared for him for a professional level when he was between the ages of 14-16. Personally, as an AIK coach and as an Eritrean I am very proud to be a part of his life and career.

It is a special feeling to see your own kids that you worked hard to develop making it to the top and you become encouraged and want to see more success. Personally, when such kids are also from my home country, my vision of making a great Eritrean national team becomes vivid and I believe this will become reality soon.

Yes, definitely! From day one of my coaching career I had a dream to go back to Eritrea and build a football academy and support our national team. I will be very proud to work and contribute my knowledge to my country. I hope that one day I can be part of our national team in a coaching capacity and to help Eritrea participate at the African Cup of Nations and win. That is my dream and goal in the future.

I love my country and would love to contribute something to this great nation. Because of my work in Sweden and specially AIK, I am very limited with time. However, last December, I had the chance to see a grassroots Eritrean academy of boys and girls age 13- 17 at Asmara’s Cicero stadium. I noticed great talent and a fantastic atmosphere. It is a good way to start building a new strong national team for the future. I was very happy and made a promise to myself to take a step forward to help them in some capacity.

First of all, we have to work on the following four important points: vision and philosophy, infrastructure, technical approach, and education. We have to work with long-term programs and goals and build a solid foundation. Youth academies and youth development are the starting points. If we can develop strong football academies with highly educated coaches, we will have well-educated football players. The results will be that we can produce strong individual players and a well-organized collective result.

First of all, I want to thank you for giving me this opportunity. And I can tell you and everyone that the unconditional love to our country will make our dreams come true.