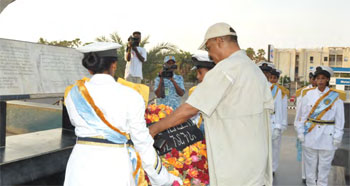 The commemoration of the 27th anniversary of Operation Fenkil, which was held from February 10 to 12 under the theme, “Fenkil: Precursor of the Final Phase” was conducted with enthusiasm.

Asmara, 13 February 2017 – The commemoration of the 27th anniversary of Operation Fenkil, which was held from February 10 to 12 under the theme, “Fenkil: Precursor of the Final Phase” was conducted with enthusiasm.

On the official commemorative event attended by high level government and PFDJ officials, military commanders, and numerous pilgrims and Massawa residents, the Mayor of the port

city of Massawa, Mr. Kidane Weldesilasie, underlined that the Fenkil Operation is one of the most important historical achievements of the liberation struggle that witnessed the liberation of Massaw. He further noted that Operation Fenkil played a crucial role in paving the way for the total liberation of Eritrea.

The General Director of Culture and Heritages in the Northern Red Sea region and Chairman of the Holiday’s Coordinating Committee, Mr. Siraj Haj, explained on the historical meaning of Operation Fenkil to the Eritrean peoples’ struggle for independence and called on all citizens to renew their pledge and readiness to boost their contribution in the nation building drive.

The event was highlighted by exhibitions, cultural shows, and other performances depicting Fenkil Operation.