A Chat with a Legend of Eritrean Cycling!!! 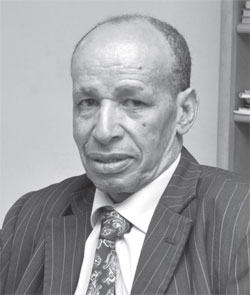 It’s always good to be home. Well, I had a difficult childhood. I lost my mother when I was just a newborn, it was my grandmother who breast fed me besides the milk I used to have from our cow. I still remember the color of the cow, it was a light brown with white stripe at the center of its forehead. My grandfather was a priest and since I was an only child to my mother, he wanted me to become a priest just like him. But I never had the will to be one. I loved to work since my early ages that is why I went to Asmara to find my aunt so I could learn and work. I have worked with different people as a shepherd for some time.

Again, by the time I was 12, I started working at a bicycle repair with Goitom Abraha, who was like a brother to me. That is when I started to take interest in riding bicycles. So one of the famous cyclist of the time Fisehatsion, came and asked me to join him in his training. That was a great opportunity for me, so I rented an old bike and joined him. To my surprise, I finished first with my old bike leaving him behind. He was really impressed with me and told his boss that I have a good future in cycling. That is how I got in to cycling.

Brava, that is a good question. Back when I just started to take interest in cycling and started to watch the races, there was a guy named Lemem kahsai. He is probably the only one who was black to participate among the Italians at that time. I recall of a specific game, I saw him cry when he came in 3rd place following two Italians. And at that moment I promised to myself and friends that I was going to compete among the Italians and win. That was a promise I didn’t want to break.

When Goitom Abraha saw the way I ride the bike he went on to say “Gigna” ( hero). And that is how I got it, everybody started calling me Gegante.

The first time I had to race with the young cyclist, I came in first place, making almost 5min difference with the other contenders. Again when I joined the first division cyclists, I came in fourth place in my first game. After competing at different events, I had to face some inconvenience which made me stop cycling for a short time. However, the then cycling champion Salim Binnie Carmelo visited me. Trust me it was such an honor for me that a champion to know my name and wants to talk to me. He was one of cycling heroes. Salim convinced me to get back to cycling and encouraged me to train with him. We used to train at the evening times because we had to do other works during the day time. I borrowed a new bike from a friend, you know what? Champion couldn’t handle me, I left him way behind. That motivated me even more. He gave me a bike and helped me to win the races that I had competed through the years that followed.

Yes, I came in 50th place. It was a good game I remember, and I was with the first contestants and was sure that I could have finished among the winners. Unfortunately, I had to face some difficulties with the bikes and had to change four times. If it wasn’t for that specific incident, I know I could have won that game. Several Italian athletes and trainers were impressed by my performance and invited me to Italy; that is when I went to Italy.

It was cold. Very cold. Naturally I can’t handle cold weather, but I had to adopt. Starting from 69 I became involved at various cycling races where I was coming in 3rd and 4th places at best. Nonetheless, it’s at a race titled, Jiro Da Osta, that I made history.

It was a very heated up race. Honestly speaking, I was racing hard to secure my spot at 2nd place, because the best racer was wearing the honorary Pink jersey. He kept telling me to let him pass and I told him that he can and kept riding. So, by the time I looked back he was far away. I just couldn’t believe that I came in first leaving their best racer behind. It was a moment that still makes me happy, I couldn’t sleep for days after that. That is my favorite win of my entire cycling carrier.

Because, the Italians were the best at cycling during that time. To beat one of the toughest racers was just incredibly joyful for me.

Yes I did, Aurellio. He helped me tremendously since I only had the talent and stamina not the knowledge of cycling. But my trainer was educated and knew what were my strengths and weaknesses. I was good in breaking away but I am not a sprinter. That is why one needs a good trainer to make the best out of an athlete.

We were informed that the Olympic Games were canceled due to some kind of inconveniences. Because of that, I was not training as hard as I should have. Suddenly, it was announced that the game was on as planned. I only had ten days training before I went into the contest which affected my timing.

Yes there was. It was in Nigeria, the all African games, I had worked so hard for that game. During the competition, at 60 km to the finish line, the Nigerians and Moroccans had broken away from us. I wanted to catch up so I told my teammates to hold the others from pursuing. They told me that it was a bad idea and it was never going to work. I believed my instincts just went for it. Not only have I won first place but I put on a 5 minutes difference with the player who got in 2nd place. Again I got my second Gold medal at the chronometer completion.

The biggest ones are, in the Champion of the world races in 1971, the Olympics of 68 and 72, tour of Spain where I came in 2nd place and tour of Italia where I came in 5th place.

I would never forget it as long as I live. I was told that the then Ethiopian Emperor Haileselasie wanted to see me, to congratulate me and award me for my encouraging results. Shockingly however, he asked me why I was not playing for Ethiopia and I told him that I was training in Italy. I also told him that I had great opportunities for me to be where I was in cycling. He openly threatened to kill me if I don’t play for Ethiopia. I was discouraged by his words. I thought that I deserved to be encouraged for what I had accomplished during my cycling days. On the contrary, he just turned the whole sport thing to political issue. And that made me stop. I didn’t want to compete anymore. After a while, they again asked me to compete for Ethiopia, I told them that I will only compete for Eritrea. I didn’t have any idea to when Eritrea was going to be free, but that was just my faith back then.

I am not that rich. It’s just that I want to see more great Eritrean athletes. Hence, I do whatever it takes to provide the young cyclist with opportunities and materials. I have a bicycle shop, the bikes are sold at a very low price. The reason is so simple, because I don’t want anyone to struggle on their way of becoming champions. The same goes for the  club I sponsor. It is a first division club. It’s a well-organized team which makes great scores at different competitions.

I had always believed that we were going to be great in cycling. And I was right. We naturally have the talent and strength. The cyclist we have are strong and talented, they are lucky they have all the support of their government and former athletes. We are capable of becoming world champions. However, for us to achieve this goal, we need great trainers to bring out the best in our athletes. Not only that, but the athletes should be well educated about the technicalities of a cyclist. That way we can be the best.

Yes. It is better for me to ride a bicycle than to walk. I am 69 years old now, I still ride my bike to travel around Eritrea, whether Keren or Massawa. There are competition that are held for the above 55 years, I win the contests now and then which means I win over people who are younger than me by years. Last year, I was a champion for a district competition.

I am married to a beautiful Italian lady Liya, and am blessed with three children.

No they are not. They had the talent but they don’t have the will to be cyclist. They don’t like it and I never force them to be.

It is my wife, my sister and my friend. Period. I was born to be cyclist.

Thank you for having me on your page. I just want to remind young athletes to be great at what they do and make Eritrea be the champion of the world.

Eritrea`s priceless shades of past