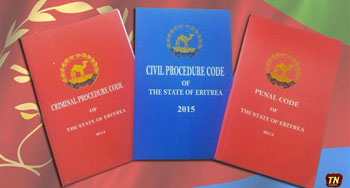 If law is going to have a real power to govern, it should never be static. It has to be updated in a timely fashion, commensurate with the developmental stages of society. Until recently, Eritrea has been using the Ethiopian codes that were codified in the 1960s, which collectively comprised the “transitional code”. But today’s Eritrea is not the same as the 1960s’ Eritrea.

Therefore, Eritrea has proclaimed new codes which reflect its way of life and norms. The new codes give the Eritrean people a sense of ownership of their legal system. They have also taken stock of the customary laws, which were equitable and comprehensive but prevented from evolving and modernizing due to colonial rule. The drafting process of these laws took several years, and required by profound research and examination of relevant customary laws and universally recognized legal principles and norms.

The exercise only involved professional legal experts and extensive consultations with all relevant stakeholders in the country.

This article will focus on the penal code to demonstrate some of the reforms introduced, the penal code deals with issues of crime and detention and governs actions that influence the interest of the state. Under the previous transitional penal code, there were some positive stipulations but the sentencing procedures were uncertain. This is because of a huge sentencing gap. For example, according to Article 630, whenever someone commits the crime of theft, the punishment does not exceed five years. So someone who is accused of theft could be sentenced for one year and someone else who has committed the same kind of crime might be sentenced to up 5 years.

Another example comes from Article 27/522 of the transitional penal code regarding homicide. The transitional penal code states that punishment ranges from five years to life imprisonment. So if there are two criminals accused of attempted homicide, one of them could be sentenced to 15 years and another one could be sentenced to 6 years. Their year of imprisonment is at the mercy of the judge who decides their case. Though the word of law is supposed to have the greatest power in deciding cases, the inconsistencies and large sentencing gap in the transitional code resulted in injustices. The new code addresses these issues and has come up with clear sentencing procedures, narrowing the gap of punishment to 3 years.

According to Article 328(1) (g) of the new penal code, theft of property of an amount exceeding 5 million Nakfa is punishable by not less than 10 years and not more than 13 years of imprisoment. In this case, the judge start by stating that the maximum years of punishment and then consider mitigating circumstances that allow for his punishment to be reduced to 10 years. Conversely, if he has an aggravating circumstance, his punishment can be raised by 3 years only. Regardless of how many aggravating circumstances he has, the maximum punishment the judge can impose 13 years. Therefore, a narrow sentencing gap doesn’t put the criminal under the mercy of the judge , promotes greater rule of law, and plays a critical role in fostering human rights and development in the country.

It is important to note that in this process, customary law provided a useful reference point. There was a long debate among the legal professionals who were working on the reform to identify the laws of other countries which most resemble Eritrea’s way of life. But it was such a surprise to find a detailed list of crimes with their specific and detailed punishment in Eritrea’s own customary law. For example, as per article 538(2) of the transitional penal code of Eritrea, cases of maiming the body or loss of one of the essential limbs or organs are punishable according to the circumstances and gravity of the case, with rigorous imprisonment not exceeding 10 years or simple imprisonment of not less than one year. So the difference between the loss of one tooth versus 3 teeth is not clearly stipulated.

However, according to the customary law of Dembezan, the loss of each tooth incurs 30 fergi (Nakfa) fine, which means that the loss of three teeth incurs 90 fergi. There are also different punishments depending on the kind of weapon used in the offence, type of injury sustained, and circumstances under which the offence was committed.

It is easy to assume that customary law is backward and underdeveloped. But the examples cited demonstrate how farsighted our ancestors were, despite their lack of formal, modern education. It also demonstrates that the customary law was superior to some parts of the transitional penal code of Eritrea and provided critical guidance on reform.

It must also be understood that highly developed laws are useless if those laws are not respected by people.as the people are the main stake holders served by the law they should know what the law says about each aspect of their life. Thus, it is critical for the Eritrean people to feel a sense of ownership of these laws such that they are obedient to the law.

Therefore, the Ministry of Justice is investing great effort in public participation and awareness campaigns to introduce the new codes before they come into effect. Regular discussions have already begun in this newspaper and there are also plans for the new laws to be broadcasted through radio and TV. All in all, a lot of effort has been made by the Ministry of Justice for the general awareness of the people about the laws.

Eritrea is working to bring the people and the law together.The hope is that the aforementioned measures will not only help guarantee peace and security but also improve the lives of all the people. In the near future, we expect to see a more prosperous Eritrea by advancing the people’s struggle for justice and human rights through efforts to update the legal code of the nation.

A Chat with a Legend of Eritrean Cycling!!!