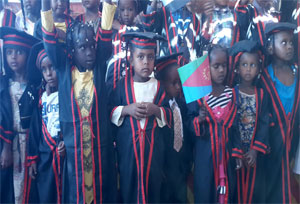 Talking about Ascoula outside borders may logically seem about further studies people pursue outside their nation. That can reasonably be for personal fulfillment and achievement. In the other extreme and fortunately, people can somehow gain similar and basic educational opportunities from far that reflect their country’s overall context. When they are away from their home, they need to settle, work, learn and gradually decorate themselves through time. Eritrea has counted decades in providing educational platform for its population in Sudan.

Eritreans have resided for decades in Sudan for many reasons. Many Eritreans made their living there for a long time. The Embassy of Eritrea in Sudan in collaboration with Eritrean Ministry of Education arranged community schools in Sudan to enable citizens residing there have a formal access to enlightenment. The Eritrean community who has settled in Sudan at various times has been able to fully get its right for education.

According to the Eritrean Embassy sponsored cultural and educational affairs office in Sudan, community schools are providing a well-established education services which go back as far as 2003. The particular feeling Eritreans have for their country and their resilient reactions for anti-nation oppositions triggered the educational platform. This is done purposefully to preserve the Eritrean culture and values. More or less 13 schools are situated in several Sudanese cities distributed in the three eastern regions, of Gedarf, Red Sea or Port Sudan and Kesela. These schools deliver the two nation’s collaborative educational curriculum on a regular basis so that citizens, along with their children out there, maintain the Eritrean culture and values, thereby contributing to the national development. An approximate of 4000 students take their preschool up to 8th grade of formal education in these schools.

The head of Cultural and Educational Affairs office, Mr. Bokretsion Habtemicael states that the mission of the office is to ensure continuation and development of the connection of the community with its mother nation, government and society as a whole. The impact of the Eritrean families in the overall achievement of the current educational podium is remarkable. To improve the awareness of the children and youth, many cultural and co-curricular activities take place in the schools. In addition, in line with the Eritrean government policy and educational curriculum, necessary courses have been periodically added. Moreover, when the learning community demands a curriculum renovation its voice is given precedence. Social science courses and English language contents related with the curriculum and Eritrean history are arranged in a way that suit the learning process in the schools. In the newly constructed schools for a uniformity reason, the introduction of the new curriculum was made mandatory. All of this couldn’t have been possible without the intense collaboration and interaction of the community and the Cultural and Educational Affairs office.

Up on requesting the head of the office for teaching aids, he informed us that there is no problem on getting reference books and also teaching staff. Depending on the annual governmental budget, abundant books are sponsored by the Ministry of Education and if by any chance shortages are witnessed necessary duplications are made. Almost in all schools the English language books are instituted from the first grade, though where normally in Sudan instructing in English language starts from fifth grade. Concerning the social science courses, a new draft with a national background is published and is already running in the teaching process. The office, principally, conducts its activities under the Eritrean Embassy with full collaboration of the community.

Referring to man power, it has been rising since 2012 and by last year around 184 personnel were involved in the schools doing their particular jobs. Out of these 184 staff members, the 15.8% were unskilled, 8.2% were involved in supervision and administration and the rest 76% accounted for the teaching staff. To continually upgrade the teaching staff constructive pedagogical lectures are offered.

The schools are regular involved in various campaigns with their students presenting cultural songs and messages on public meetings and Independence Day that reflect their identities. Many of the activities are organized by the various regions and the office.

The number of students during the last two years has shown an increment. In the Port Sudan region alone, as a result of opening two additional schools, the number of students has risen by 155 from 2015. The Gedarf region registered a 25.6% growth comparing to the 2015 academic year while in the Kesela region a 7.20% growth was seen. These figures include both female and male students.

As the number of students gradually grows, it is compulsory to renovate the old schools and make them suitable for learning. In the Gedarf region a land has been provided for building new school. In 2015, in Halfa, out of the four school which were on plan to be constructed, two permanent and four temporary classrooms were constructed. In Shegerab, Emgurgur, Wedelhlew, Swak and Port Sudan a preliminary renovations to the classrooms were made. The plan of the Cultural and Educational Affairs office is to make these schools more competitive though the project requires some big investment.

Many of these schools bear names in line with the Jehaz Ataelim administration regulations. Some of them possess names such as Alweteniya, Alwahida, Aydun and the like. These names, however, have been creating some controversies among many senior teachers, officials as well as educational and security institutions and some initiatives are taken to change them all.

The relation of the community associations and the head office greatly boosts the educational provision. Understanding this, the community association in Port Sudan campaigns on educational activities regularly since it takes it as core for its unification. It strives on advancing education in the region, creates potential family committees and encourages teachers. In Gedarf, the community, apart from its own activities, works with schools on innovations and involves its members on environmental works. The members of community associations in Kesela region involve themselves in providing materials including educational instruments for disabled students. Last year during school closing day, a 2000 dollar worth of materials that include televisions, bicycles, radios and other stuff were distributed as prizes.

The Cultural and Educational Affairs office periodically arranges visits to the three regions and tries to create a bridge between higher officials and the schools so the schools can build up their affairs gradually. It also arranges meetings with higher educational facilities like the Sudan Open University and the International Institute for Arabic language.

The process is flowing, registering optimistic results and growth. The office annually sets future plans so it can work better year in year out. It thoroughly assesses its whole year programs. Currently, it is looking forward to advancing its existing schools and opening new ones, to qualitatively improve the education system and make the schools more influential.

Opportunities are available inside and outside as long as citizens strive to manage themselves through education. Engaging in such beyond border educational platforms towards citizens will wipe away illiteracy once and for all and will no longer be an issue of concern. This being the case, the future will itself bring these citizens to their homeland to continue their undergraduate and post graduate studies in the existing colleges of their own country.

Desale, Passing on the Torch…