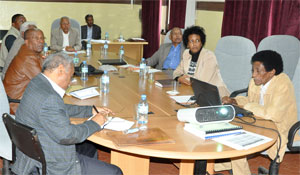 The Ministry of Local Government on 20 February conducted a meeting regarding last year’s work assessment and the programs mapped out for this year.

Asmara, 21 February 2017 – The Ministry of Local Government on 20 February conducted a meeting regarding last year’s work assessment and the programs mapped out for this year.

He noted that thanks to the abundant rainfall in 2016 and the efforts exerted by the government and the farming community, good crop harvest was obtained. He further gave extensive briefing pertaining to the study conducted regarding the management of land resources and the allocation thereof, village regrouping, forestry and wildlife as well as development prospects along the Eastern and Western escarpments.

In the course of the meeting, extensive discussion was conducted as regards administrative capacity and integrated management, coupled with strengthening national campaigns, implementation of land proclamation, and the issue of land lease, tax collection and the capacity of supervision dynamism, among others.

The Governors of the six regions presented reports highlighting development programs in their respective regions as well as the positive aspects and challenges encountered.

The meeting further conducted extensive discussion on the development programs for 2017.