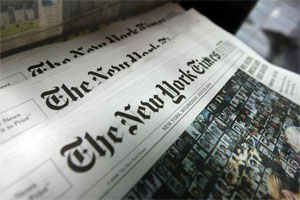 The term “fake news” is not new, but it was Donald Trump, during his first press conference that the term “fake news” broke out of media discussions and into the mainstream. “You are fake news!” he pointed at CNN’s Jim Acosta. The President has been calling out major media outlets several times a week for being ‘FAKE NEWS’ through his Twitter feed – and seems to single out CNN and the New York Times. He once wrote:

Eritreans could say the same about the New York Times and other establishment media in Europe and the United States, in what seems to be an obsessive campaign to cement a negative narrative on Eritrea through articles, books, scholarly journals and even movies and video games. They have gotten Eritrea wrong from the beginning and still have not changed course and probably never will. I don’t know that they are being dishonest, but certainly it is a disservice to their readers and it is stories like that of Joshua Hammer’s latest piece on Eritrea that contribute to the fake news that abounds today and the distrust of the mainstream media.

Like many of his predecessors, a visit to Eritrea, has come to mean an excuse to repeat debunked narratives, and should not be confused with a visit that half way attempts to verify or provide context or concrete facts or give a better understanding of Eritrea’s challenges and opportunities. His article on Eritrea is a rehash of unsubstantiated allegations against the country made by parachuting journalists and a well-orchestrated and well-oiled vilification campaign by Ethiopia, its handlers and surrogates, the mainstream media, Guardian and New York Times in the lead, who partnered with a network of non-descript “human rights” and “democracy” groups funded by the National Endowment for Democracy and the George Soros Open Society who mushroomed in cyberspace in the after math of the 1998-2000 Eritrea Ethiopia border conflict.

This author will try once again to educate readers on the issues raised by Joshua Hammer in his New York Times piece on Eritrea. Hammer writes:

This line is almost always used by the perpetrators of fake news about Eritrea. What does it actually mean? Who are the folks that “considered Eritrea to be amongst the continents brightest hopes”? Truth be told, are they not the same folks who have contributed to the negative narratives on Eritrea? Are they not the same individuals/states and groups that have burned the midnight oil trying to isolate Eritrea and dash the peoples’ hopes? As for being “impoverished”, that too does not jive with the reality on the ground and does not account for the hostile environment that Eritrea has been forced into for the last 15 years. It does not account for the economic and political pressure through illegally imposed US-Ethiopia engineered sanctions and the 15 year long Ethiopian occupation of sovereign Eritrean territories in violation of the final and binding Eritrea Ethiopia Boundary Commission’s delimitation and demarcation decisions.

Unlike some of its neighbors that rely almost entirely on humanitarian and development aid to support their national budgets and mitigate any crop shortfall, Eritrea relies mainly on its own human and natural resources. In spite of a fragile ecological environment and recurrent droughts, Eritrea manages to feed its own people and having worked in earnest to develop its water security infrastructure, it has been able to dodge the effects of climate change and has not had to deal with drought conditions found in the region. Eritrea is also one of a handful of nations in sub-Saharan Africa that has achieved 6 of the 8 Millennium Development Goals (MDGs). Despite the negative speculations about Eritrea’s lucrative mining sector, today, it is growing and has attracted investors from around the world. No doubt it will provide the added impetus needed to jump start Eritrea’s economy. Eritrea is also blessed with comparative advantages in various sectors and in conducive conditions of regional peace, its potential for rapid and sustainable economic growth is considerable indeed.

Joshua Hammer, like his predecessors, writes about the National Service Program in Eritrea, but instead of speaking to those who can provide him with insight on the program, he like his predecessors, bases his account on a few disgruntled voices (3 people in this story) that he just happens to run into during his voyage. There are thousands who are participating in the NSP and serving in various capacities throughout the country as teachers, engineers, surveyors, small and big machine operators etc. etc. and thousands working at Eritrea’s nascent institutions, yet, these visiting journalists seem to find just the persons that can provide the soundbites to fit the desired narratives. Hammer’s insertion of the views of a visiting Eritrean from Norway is calculated, and meant to drive in the notion that the feelings of Eritreans is universal, not limited to those “stuck” in the country.

Hammer does not bother to write about the asylum policies that have contributed to the luring of Eritrea’s youth with false promises of greener pastures in Europe and the United States. Hammer says the youth want to flee, but does not tell the horrific stories of what they encounter once they leave Eritrea. He does not write about the horrors of life in the various UNHCR funded camps found in Ethiopia and neighboring states. He does not tell about the organized trafficking rings that operate in these countries and beyond. He does not write about the dire fate of those who arrive on Europe’s doorsteps, desperate and destitute, only to be rejected and placed in detention centers and camps for years on end. No, that would not fit the desired narrative. By the way, if by accident or by some freak chance, these fake news journalists run into someone that does not agree with them, the usual label is that they are a “government spy”, “close to the leadership”, or “member of the ruling party”…

As has been the norm with purveyors of fake news on Eritrea, Hammer confuses the Commission of Inquiry and the Special Rapporteur who produced the now rejected report on Eritrea, with the United Nations. It was this group that accused Eritrea of committing “crimes against humanity”, not the United Nations. Neither the COIE, nor Sheila Keetharuth, the Special Rapporteur, produced any evidence to support the outrageous allegations found in the report, which relied heavily on manufactured information provided by the minority regime in Ethiopia and sub-standard “research” provided by its surrogates in the Eritrean Quislings League (EQL). Hammer also neglects to mention the fact that the Commission of Inquiry was disbanded in July 2016, its findings rejected by the UN Human Rights Council, and also the fact that whilst the mandate of Sheila Keetharuth, the Special Rapporteur, was extended for a year, her credibility and reputation, and of the intuitions that she has been associated with, have suffered a devastating blow. Her report to the

This is yet another example of lazy journalism. The US-engineered sanctions, a continuation of a very hostile policy of appeasement and legal attrition of the EEBC’s decisions, were transparent in their motives. They were orchestrated to give the regime in Ethiopia a win that it could not get in its US-backed bloody war of aggression and expansion, or through legal arbitration. The illegal, unfair and unjust sanctions should be seen in this context. The desperate agenda led to equally desperate means and as the record below will show, the usage of manufactured facts, outright lies, and deliberate deceptions that mark the ugly US-Ethiopia saga that used Somalia as a pretext.

Ever since the US-backed Ethiopian invasion and occupation of Somalia, Eritrea has been placed in the position of being presumed guilty and was asked to disprove the SEMG’s allegations. Eritrea was asked to prove that it did not support terrorism, that it did not arm groups-specifically Al Shabbab in Somalia, that it did not have Eritrean forces “fighting alongside the ICU” etc. etc. Here are facts that could help put the sanctions into context:

Fortunately, time has exposed the many outrageous lies and fabrications. (SEMG reports these days acknowledge the fallacy of the Al-Shebaab dimension). Wikileak cables have also shed light on the underhanded shenanigans that took place in the Horn and the extraordinary efforts of various US officials in the Obama and Bush Administrations who worked in tandem with the Monitoring Group, the US Mission at the United Nations and with surrogate regimes in the Horn, to use the African Union (AU) and the Intergovernmental Authority on Development (IGAD). The WikiLeaks cables also expose an ugly record of arms twisting, lying and extraordinary coordination by US Ambassadors in the region and members of the Ethiopian government including its Prime Minister to get “stand alone sanctions” against the State of Eritrea using Somalia as a pretext. Fake news contributed to the illegal sanctions against the State of Eritrea and its people.

Omission of facts is what contributes to distortions found in fake news. For instance, Hammer claims in his report that “According to the government guides” he spoke to, “the country received fewer than 1,000 tourists in 2015”. Hammer could have gotten the exact numbers had he consulted those who have the information, but by telling his readers his sources were “government guides”, he figures he can get away with it.

The fact is that thousands of Eritreans who reside in Africa, Europe and the United States visit Eritrea annually. Immigration figures show that there were 29,518 foreigners and 112,882 nationals residing abroad who visited the country last year (2016); the year Eritrea celebrated its 25th Independence Anniversary. Hammer deliberately omitted that fact because it could not jive with the narrative that he was trying to advance. As Donald Trump would say, this is DISHONEST!

A 15 Minutes Trip to Massawa