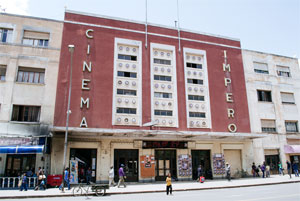 Nowadays our movie houses seem to have taken fancy to video films made in Eritrea by Eritreans. Long are gone the days of theatrical plays. What happened? Maybe it is easier to transport videos than a group of actors with their accoutrements. And stage actors may get ill and miss rehearsals. It is difficult to get a replacement soon. The understudy, under pressure of the shining light, usually tends to mess things up.

With video, the story is already imprinted in the magnetic tape or perhaps digitally stored. The actors have already left after being paid. The producer is now free to do whatever he or she likes with the film. He/she can even make the actors speak in various languages by simply inserting subtitles or through dubbing. This cannot be done with plays.

The problem with our local videos is however their lack of simplicity. They are high budget films made with low budget projects. They aspire to reach the stars but remain grounded for the rest of their lives.

I have seen some of them recently. Good story, bad script. Good script, bad shooting. Good shooting, bad editing. They are never perfect or near perfect. There are exceptions of course.

Most are made for quick profit with mostly inexperienced stage actors and sometimes with people who have never ever played on stage. A person can be a good stage actor but that alone cannot make him or her, a good film actor. There is a great gap between plays and films. Histrionics is for plays; it has no place in serious films.

Besides, on the overly glossed poster one can see the name of the producer, director, editor and costume designer, but most of the time, the job description is not clear. Cinema is one of the only art forms that can be truly called a collaborative effort, but, there is no clear-cut role in the making of our movies. That’s why the producer or director rarely pays attention to lighting or sound effects. Because, the job is left to anybody. And anybody is liable to make foolish mistakes.

There are no consultants or advisors. Just make a love film with enough melodrama to make the audience shed emphatic tears. Exploiting the emotion of viewers is not good. The idea should be to entertain and teach. When you make people weep, it should be justified. Poor producers are ready to make people laugh with antics and cry with overacted death scenes.

In all the local videos I have seen, I have never come across anyone with its original film score. The music or film theme, if there is any, is a direct copy or popular light or classical music. I remember listening to La Paloma( a popular Spanish song) played during a battle scene. I don’t know what this Paloma is about, but is the producer sure that it fitted into the scene he chose for it? Perhaps it was a dance battle!

Of course, these days no one is immune to imitation. But, when one imitates, one should at least be very subtle about it. Imitation is suicide. It shows mental poverty. Creative minds should abhor imitation, especially cheap imitation. Scores and musical soundtracks have been, and almost always are, integral to the movie-watching experience. There are many cinema fans that appreciate the sound in film and understand the effort that goes into creating and integrating a good soundtrack.

Simple is beautiful. Why not produce films about the life of a Medeber scrap merchant? About the hardship of a student life? The dream of a shoe shiner?

A couple of years back, I watched a movie of Una Giornata Particolare (a special day) in translation. I envied the film for its simplicity. I came to realize the Italians were talented filmmakers. They are really great. Well, haven’t they produced Michael Angelo and Leonardo Da Vinci in the past and Versace.

The film is a superb production.

Hitler comes to Rome to pay a visit to the Duce. Everybody goes to the festival. The city is almost empty. Whole families are in the big square where the two dictators harangue the

poor Italians by turn. Some old people remain at home and listen to the radio. A certain woman is home alone. On the next block, a man is home alone because he doesn’t like dictators. The woman has a bird in a cage. She inadvertently opens the cage. The bird flies away and lands on the sill of the window of the house on the next block. The bird becomes the cause for the meeting of a man and a woman. But, the romance (of course, a bit of cheating) remains until the festival is over. Five hours at most.

What I like about the film is that the whole story begins and ends in the same building. No location, no scenery, no artificial background, no extras, no trips abroad, no violent action. Just a simple and less expensive production. A real human encounter with human weakness and short comings. What about the music? The Italian or German national or festival music that was being played at the square served as the background music for the film. It was simply wonderful.

Of course, after a bit of search in the old Google- I found out were Marcello Mastroianni and Sofia Loren, both superstars. But what made the film unforgettable was its simplicity. Simple but wonderful! It is the kind of cinema where the director treads the middle path, trying to present a dry or serious subject as a sugar-coated pill, where the quantity of sugar never exceeds the quantity of medicine.

I wish our video producers did the same with their production. In my humble opinion, keep it simple but creative. Don’t imitate. Have some variety by changing themes. Not always about love and war. The world is more than love and war. Remember Good Will Hunting, The postman.

Truth is simple, one Philosopher said, it is the foolish of the earth that complicate it.

A 15 Minutes Trip to Massawa