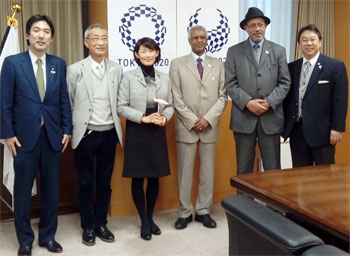 The Commissioner of Culture and Sports, Ambassador Zemede Tekle is conducting a working visit to Japan from 20 to 26 February.

Asmara, 25 February 2017 – The Commissioner of Culture and Sports, Ambassador Zemede Tekle is conducting a working visit to Japan from 20 to 26 February.

Ambassador Zemede held talks with Japanese Ministers of Olympics and Para-Olympics and Foreign Affairs, Administrator of Kinagawa Region, Vice Director of the Executive Committee for  Tokyo Olympics 2020 as well as other heads of sports.

The Japanese Foreign Minister, Mr. Fumio Kishida, expressed appreciation for the timely visit of the Ambassador to Japan and said that the relation Japan has with Eritrea is growing from time to time.

Ambassador Tekle on his part emphasized the significance of his visit in strengthening the relation between Eritrea and Japan  in the sector of sports.

In the meeting conducted with Mr. Yosuo Mori, Vice Director of the Executive Committee of Tokyo Olympics 2020, the two sides reached understanding that allow the Eritrean cyclists to use the Misado Training Center as part of their preparation for the Olympics. They also agreed to sign memorandum of cooperation for the strengthening of cooperation in culture.