Engel ’ela : Traces of Early Human Existence in the World 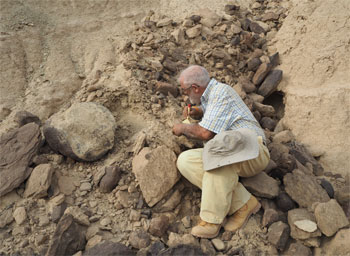 I am a Professor of Paleontology. I study the fossil fauna, and I have been studying fauna in different countries, especially in Africa. I started to work on the African fauna thirty years ago in countries such as Tanzania, Kenya, and Ethiopia, but I have been working in Eritrea for the last 15 years, which I believe is my most important research line to date. I am very grateful to have such a great opportunity to work here, because Eritrea, is a country which possess an early evidence of a more than 5 million years of fossil record, which makes it one of the places of the earliest evidences of human presence in the world.

Well, I came to Eritrea in 2010 when I was invited. To study the fauna at the very famous site in Buia which is close to the site of Engel’ela, by one of the Italian team which was previously working here. Buia is a fantastic site, one of the sites to have the fossil records of one million years of age in the world. These are full of fauna and lithic. There, we had a very important finding of the earliest bull of the world, one million years old which is an interesting discovery. That specific discovery made Eritrea recognized as one of the countries of the evidence of early human presence. After the discovery was made, I was invited by several media to talk about the findings.

During 2011, one of the important things we did was to provide Eritrean archeologists to earn their Masters in Spain and other related advanced education regarding their fields. We came up with that idea to not only for the advancement of science but also to help Eritrea develop the scientific community. Even now, we want more people to study in Spanish universities and return to Eritrea and collaborate with the Archeological Department.

Though it is an area with very hot climate, however, our scientific interest is much bigger. If you want to be there and work, you also have to know that it is going to be very hard and accept it. Six years ago I was collaborating with the Italian team, I still am. But then again I thought that it would be better to develop a new project. I talked with the head of the National Museum Dr. Yosef Libsekal and we developed a new project with my colleagues and with other local archeologists. We had numerous fossils which we weren’t so sure of their age. But our biggest finding was in 2013. We found a very interesting fossil of a pig which was more than 5 million years of age. Again another fauna which was a million and half years older. That is when we thought that we might have a very good fossil records of millions of years. We also discovered numerous discoveries but we are still not sure of the ages. We are trying to find the earliest human existence in Eritrea which means at the same time the earliest humans in the world.

Until now, we have done five filed seasons, which is only 50 days in the field. Now that we have the complete geological information of the place, we need to have numerical data on technologies. This last season, we took more than 50 samples to help us with the numerical data using different technologies. Nevertheless, the most important discovery we have had so far is that of the mandible that has a record of more than a million years old. We have also different places full of more lithic that looks very primitive. These are the earliest lithic artifacts in the world. We have also found interesting fossils of large mammals, hippos, buffaloes, of rhinos, horses, turtles, pigs, and crocodiles which means that the land scape has tremendously changed during the last millions of years.

Yes, now it is totally a desert. With so much relentless work done, we hope to have a very good understanding of what was going in those places. Developing hypotheses are very good, but you have to demonstrate whether they are right, or not. To prove if they are true or not, the use of technology us required.

The National Museum had several people working there, unfortunately there weren’t enough specialists on fossils and pre historic archeology. That is why it was so important for them to go to the universities I told you about. However, we had great support from the different institutions and authorities in Eritrea. I still think that Eritrea still needs to develop the scientific community to work on paleontological science but it is our obligation as people who are working here in Eritrea. To help the Eritrean people to develop the institutions and science. And we will try to do our best for this to happen.

They are amazingly interested at what they do and to enhance their research and future carrier. This last season we brought numerous archeologists to work with us from the National Museum. They are hard workers and very intelligent people. Science is a very competitive model of life. In science you have to be the best. We need good people to work in science and I think that Eritrea has good hardworking people who are interested in science.

It is very easy as we have every collaboration from the local institutions. If we hadn’t had the support, for sure it would have been hard. By the way I want to thank all the Eritrean institutions and authorities for the opportunity. I have been here for almost 15 years and I want to stay working here for at least 15 years more.

Eritrea has one of the most important heritages of the world to prove the earliest existence of humans. Once again I want to thank the Eritrean authorities for allowing us to work here, they didn’t just allow us to work but also helped extend our passion.

Some Notes on Eritrea’s Economy