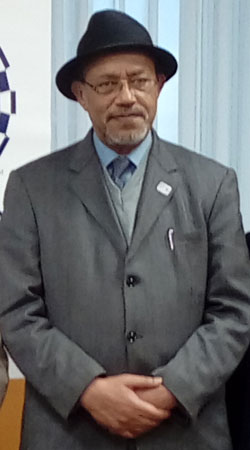 First  of all let me express  my deep  felt gratitude and appreciation    for accepting  our invitation  to participate,   in spite  of your  busy  schedules,   in this reception   which  is being held to honor  Ambassador   ZEMEDE Tekle  –  Sports  and Culture  Commissioner   of the  State of Eritrea’s   working  visit to Japan  from  February   19 to 26, 2017.

The current   visit to Japan by Ambassador   ZEMEDE Tekle is in line with the continued   mutual  efforts  being  conducted   to enhance  and develop  the friendly  relations,   in general,  and build  sport  collaborations    prior  to Tokyo2020   in particular,   between   Eritrea  and Japan.

As we all know,  sport  members   and their  supporters  have  a very  special  relationship   – a unique  process  in many  ways because  it requires the  right  assemblage of different elements   to make  them  achieve  good results.  If teamwork is not nurtured  effectively  among  all members,   a successful result  becomes  a rarity  – be it at national  or local level.

Eritrea,  a young  nation  in Africa, which  has come of age – after  a long political  and  armed  struggle   for independence,     is currently   facing many  challenges.  Navigating   Eritrea   to a strong  and  economical   prosperous    destination   is  not only an odyssey  but also a continued   process  of more  than  130  years of nation  building.  The people  of Eritrea  continue  to work hard,  in-spite  of all the odds,  to achieve  this goal –  in the area of sports  and culture  as well.

The mutual  sharing  of important life skills of artists,  athletes, players  and  coaches  with  the  international  community   in general  and Japan  in particular,   though  old,  but is new in many  ways  to the newly  independent  country  of Eritrea.

The long journey  of Eritrea  to independence    and  its past participation     in Tokyol  964 and the  coming Tokyo2020 Olympics  and  Paralympics    is  a memorable   phenomenon    for our generation   and somehow   intertwined    with  the importance   of Ambassador   ZEMEDE’s   working  visit to Japan this  week  too.

Yemane   Negassi,   President   of the Cycling Federation   of Eritrea  (central   region)  and  Rigat Teele Head  of the Women Cycling Federation   of Eritrea  (central  region)  participated  at Cogway Shikoku  Discovery  Ride 2013  (720  Kms Tour) invited  by Japan  Eritrea  Cycling Friendship   from  6th –  16th  of October  2013.   Yemane  was  a Tokyo Olympiad  of 1964 where  a team  of 4 Eritrean  cyclists  and  6 Ethiopian  athletes, including  Abebe  Bekila,  the  famous  marathon   champion, participated    in one team together.   Yemane   promised   – in a press  interview   he made  after  his successful  Cogway Shikoku  Discovery  Ride – “Eritrea  shall come to Tokyo once again  in 2020  to win – but this time  Eritrea  will participate under  its own flag  with  many  young  athletes   born  after independence.”

These  were  followed  by study  tours  to learn  the  background and sports  experiences  of both  countries – conducted, sponsored and organized   jointly  by SEISA Group and Commission  of Sports  and  Culture  of Eritrea,  in close coordination   with  the  Embassy  of the  State  of Eritrea  to Japan   for last two years.

Ministry  of Tokyo  Olympics  and  Paralympics   2020,  Cabinet Secretariat – HQS for Tokyo Olympic and  Paralympic Games, Eritrean   Sports and Culture  Commission, Government   of Eritrea and Government   of Japan are all lined up, as a strong  team  of friendship   to support   this  program in preparation  towards a successful  Tokyo2020.   The friendship, which is mutually being built through different venues of private and public participation, will definitely last beyond the horizon of Tokyo 2020.

Therefore,   let me take  this opportunity to express  our deep felt gratitude  and thanks  to all the  friends  of this  project  of sports  and cultural  exchange  between   Eritrea  and Japan present   here  today.  And as I  mentioned   in my introduction, let’s  work  hand-in-hand,  together,   in a spirit  of a very strong, closely  knitted  team,  to further   promote   Eritrea  – Japan  long lasting   friendship   and the  success  of Tokyo 2020.

Sport  and  culture  is where  the  heartbeat  of the  people   of Eritrea  and Japan  is.  Thank  you, once again,  for all the solidarity   and  friendship   that  you all extended   to the successful  working  visit  of Commissioner   ZEMEDE to Japan.

Engel ’ela : Traces of Early Human Existence in the World