Molqi in a Promising Development Track 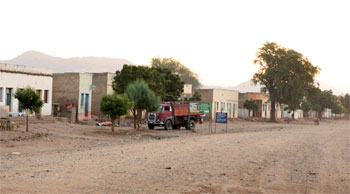 The Gash Barka Region is the largest area of the six regions in Eritrea and is rich in natural resources. Gold, Zinc and Silver are among the most highly concentrated mines in the area along the variety of wild animals such elephants, ostriches and crocodiles. Gash Barka comprises sub zonal administrations. Since independence, the people and administration of the region have performed many developmental programs.

The region has rich arable land and most of the people engage in farming. While some participate in small scale economic activities. Gash Barka is inhabited by people from Tigre, Tigrigna, Kunama, Hidareb, and Nara ethnic groups.

Molqi is one of the 14 subzones of the Gash Barka Region and is situated 120 km south east of Barentu. To the west the town borders with Shambiko, to north with Mensura, Areza in the east and with Ethiopia in the south and south west. Molqi covers about 187,000 hectare of land surrounded by mountains and valleys. Molqi has 48,215 inhabitants with 10,046 households settled in 19 administrative sub zones and 62 villages. The inhabitants of the town are mainly from the Kunama and Tigrigna ethnic groups and most of them engage in farming and pastoral activities.

According to Mr. Zeray Berhe, governor of Molqi sub zone, the area did not have permanent inhabitants for a long time so there was no adequate and permanent social service. However, the government is now paying attention to the sub zone and striving hard to improve the living conditions.

Molqi initially had only 12 households, which has now risen to around 600. The village has undergone rapid change in the recent years with its master plans and different social services. There are four health centers providing the best health care services; two are in the southern and the other two in the northern part of the subzone. As the sub zone is near the border, there is a high risk of spreading communicable diseases. Hence, the inhabitants are regularly alarmed through continuous campaigns.

Another important issue is the environmental sanitation, because of the threat of malaria. By forming teams within communities, the sub zone exercises organized sanitation activities five to six times a year.

Education wise, pre independence there were programs and campaigns organized by members of EPLF to eradicate illiteracy. At this time, every administrative subzone has one or two schools based on the number of residents. Over all there are two kindergartens, nineteen elementary, five junior and one senior secondary school teaching 7,453 students. Even though the infrastructure of the schools is not modern, the population’s awareness of educational benefits led the government to put more emphasis on education. As a result eleven modern schools have been built and three are planned for the future. The community and schools are working hard to get most of the opportunities to produce competent students. In fact some students from the sub zone have become medical doctors.

Due to its geographic location, Molqi suffers from shortage of clean water. People use dams but are advised to add chlorine into their water. There are nine hand pumps, one solar pump and nine motor pumps which distribute water to different parts of the subzone despite the geographic discomforts. In 2015, the sub zone recieved around 15 million Nakfa to construct one big dam and three small ones. These dams provide services to remote villages, and minimized the distance people used to walk to fetch water.

Though the sub region has a 210 km road way access, the topography of the area is full of ups and downs, surrounded by mountains. The road fails to deliver the needed services, particularly after summer times. To overcome this, people regularly gather and restore the road to facilitate their affairs.

So far only three villages out of the 19 in the sub zone are connected to one another. As a result, the movement of the people is a little bit restricted, limiting the economic interaction among them. However, recently, the administration of the sub zone in collaboration with some road construction companies and Harat Transport Company made agreements and people look forward to getting better access to the roads.

In addition to other investments the subzone is striving to protect its natural resources. Water and soil conservation is among the many programs. Such programs are mostly done through community participations during summer like terracing the land and planting trees. For these enthusiastic activities, the sub region has received a prize of nearly 150,000 Nakfa from the government.

People of the sub region are welcoming and are good at reserving old cultures. The land has historical significance and it is also rich in wild resources. This makes the sub zone to be a fine spot for tourism. One of the historical places, Dibeno, is a reserved area that holds important memories of the armed struggle time. Tikul is another reserved area which has the potential to attract tourists and is expected to serve as National park.

Provision of social services is crucial in areas with a big population. There are three hotels already delivering services and two more are currently under construction. Molqi is the only place which connects the Debub Region with the Gash Barka Region. Meanwhile, lots of economic activities are expected to run in the future. With the start of such construction, promising developments are expected from many service providing firms. For reasons mentioned above and for being abundantly rich in gold, making molki a center of mining companies in the future would be inevitable.

Italy and Eritrea: ‘Running’ Side by Side