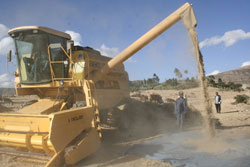 Emerging from the activities of women’s and labour movements at the turn of the twentieth century in North America and across Europe, IWD was first commemorated by the United Nations (UN) on March 8th during International Women’s Year in 1975. This year, IWD will be recognized under the theme Women in the Changing World of Work: Planet 50-50 by 2030. According to UN Women (the United Nations Entity for Gender Equality and the Empowerment of Women, also known as UN Women, is a United Nations entity working for the empowerment of women), measures that are key to ensuring women’s economic empowerment in the changing world of work must include: bridging the gender pay gap, which stands at 24 percent globally;

work; as well as addressing the gender gaps in leadership, entrepreneurship and access to social

protection; and ensuring gender-responsive economic policies for job creation, poverty reduction and sustainable, inclusive growth. Additionally, policies must account for the overwhelming majority of women in the informal economy, promote women’s access to innovative technologies and practices, decent work and climate-resilient jobs and protect women from violence in the work place.

In Eritrea, IWD is recognized as a national public holiday and many activities are planned, across villages and cities in the country and within Eritrean communities around the world. For example, at the College of Arts and Social Sciences, located in Adi Keiyh, in the south of the country, students, faculty, administration, and the surrounding community will come together to recognize and celebrate the important roles played by women and girls in our families, communities, and nation.

Eritrea’s independence struggle was pivotal in challenging existing long held gender stereotypes and structural systems of inequality. The longest African independence war of the 1900s, and amongst the most destructive, Eritrea’s three decades long struggle was about far more than just political emancipation. Rather, it sought to usher in a complete and radical transformation of society. Accordingly, an important dimension of the struggle – giving special attention to egalitarian, popular democratic principles and ideals – was a particular focus on women’s and gender-related issues. No longer would women be narrowly viewed as secondary, subordinate figures within society; instead, they would stand proudly as full equals to men. For example, the Eritrean People’s Liberation Front (EPLF) – which administered large swathes of what was then Ethiopia – introduced initiatives to abolish female genital mutilation/ cutting (FGM/C), forced marriages, bride price, child marriages, kidnappings, and dowries.

Importantly, within the annals of revolutionary liberation and guerrilla movements, Eritrea’s women were set apart upon two dimensions – their role and their number. During the war, Eritrean women comprised more than 30 percent of the fighting force and they served in all capacities, including as “ combatants, active organisers, teachers and administrators, as well as mechanics, electricians, electronic engineers, watch repairers, tailors, barefoot doctors, and village health workers” (Firebrace and Holland 1985: 41; Hale 2001: 160-161). Ultimately, Eritrean women would prove absolutely critical to the eventual achievement of independence.

In honor and recognition of Eritrean women’s monumental contribution to the liberation struggle, the country undertook several significant steps after independence to formally guarantee women’s equal standing in all sectors of society. It ratified the Convention on the Rights of the Child (signed 20 December 1993 and ratified 3 August 1994), the Convention on the Elimination of All Forms of Discrimination against Women (acceded 5 September 1995), and the African Charter on Human and Peoples’ Rights (in 1999), and has worked diligently to implement the Beijing Platform for Action. Furthermore, Eritrea legally prohibited harmful, traditional practices, including FGM/C, child marriage, bride price, kidnappings, and dowry.

As well, the National Union of Eritrean Women (NUEW), an organization first established in the 1970s and boasting hundreds of thousands of members worldwide, has actively coordinated, monitored, and implemented a broad array of programs, initiatives, and public campaigns. Importantly, NUEW’s multifaceted work has substantively helped propel social transformation, develop a conducive environment for gender equality, support the empowerment of women, and encourage women’s equal participation in the political, economic, social, and cultural spheres. A recent visit to the NUEW head office in Asmara only served to underscore my tremendous admiration and respect for the organization’s past work and continued efforts.

Notably, towards improving gender equality, Eritrea has made the expansion of educational opportunities for females a national priority. For example, it has worked to revise curricula and teaching materials to make them gender sensitive, and improved accessibility by increasing the number of female teachers and establishing boarding schools for girls in remote areas. Encouragingly, since independence, national gender disparities in enrolment, completion, and literacy have improved significantly. The 2013- 2017 Eritrea National Education Expansion Development Report notes that “female gender parity with males will be achieved in elementary and middle education by 2015/16, and in secondary education by 2016,” and that “in technical and vocational education and training the enrolment of girls has continued to grow.” In the article, “Women’s participation in higher education in Eritrea,” published late last year, Simon Weldemichael presents important data illustrating the tremendous annual improvement in female enrolments at the College of

Furthermore, it should be noted that literacy rates for young girls and women in Eritrea are considerably higher than those for adults, suggesting that the country’s efforts to strengthen the supply and quality of basic education programmes, particularly for females, have been successful. These trends are particularly impressive when considering that, in the not so distant past, literacy throughout the country, particularly for females, was tremendously low.

The positive developmental impact of improving access to education for females should not be understated. According to the International Center for Research on Women (ICRW), “women are more likely to control their own destinies and effect change in their communities when they have higher levels of education.” Furthermore, higher rates of enrolment and achievement decrease fertility and improve child health, while also promoting economic growth and poverty reduction by enhancing poor people’s chances of securing a job, raising productivity and earnings of the working poor, and increasing the efficiency of entrepreneurs (Hauchler and Kennedy 1994).

In addition to education, Eritrea’s general development policies have also served to support equality. For example, consider access to water, which has been a central focus of Eritrea’s national developmental objectives. In recent years, access to clean drinking water in rural and urban communities in Eritrea has risen to a total of 85%, dramatically higher than the meager figure at the onset of independence (Ministry of Land, Water and Environment; Pose and Samuels 2011). Much of the country’s improvement is down to considerable investments, cooperative projects and integrated approaches that cut across ministries and sectors, a simultaneous focus on both rural and urban populations, and broad community involvement. Notably, the lack of access to water is not just a fundamental human rights issue, it also extends to harm efforts to promote gender equality and women’s empowerment, therefore additionally severely limiting potential for broad development. Girls spending valuable time fetching water may not attend school, thus missing out on education that may propel socio-economic transformation, while women who spend hours fetching water have less time to engage in productive income-generating work and activities.

Importantly, particularly when considering the theme of this year’s IWD, Eritrea’s attention to gender equality has also extended to the employment and economic sectors. Globally, women’s economic empowerment is increasingly recognized as an important factor in promoting gender equality. Economically strengthening women is not only a fundamental moral imperative, in terms of encouraging the realization of inherent, inalienable women’s and human rights, it also serves to stimulate and undergird economic growth and prosperity. A plethora of examples and case studies abound – from Bangladesh to Bolivia to South Korea and Kerala, amongst others – revealing that when families, governments, the business sector, communities, and societies invest in girls and women, and work to eliminate inequalities, developing countries are less likely to be plagued by destitution and poverty and they become better positioned to thrive within highly competitive global markets. A quite telling example of women’s vital role in stimulating economic growth and prosperity, and ultimately tangibly improving societies, comes from Norway. In the 1970s, as Norwegian women entered the labor force en masse, overall productivity greatly improved, while the country’s tax base nearly doubled, helping to undergird a generous, universal welfare state that supports all segments of Norwegian society

In Eritrea, National Labour and Land Reform Proclamations secure legal protection for women in employment, guarantee women equal opportunities and maternal protection benefits, and ensure that women are able to purchase, use, or inherit land without discrimination. Additionally, several national initiatives, such as the Macro Policy, the Interim Poverty Reduction Strategy Program, the National Saving and Loan Program, the National Gender Action Plan, and NUEW’s micro-credit programs were specifically created to guarantee that women would be adequately supported with the requisite resources and vital technical training that would help them fulfill their socioeconomic potential.

The diverse efforts promoting equality, coupled with gradual – yet quite noticeable – societal cultural changes, have seen women integrated into many sectors of the economy, allowing them to play a vital role in the country’s development and progress. With the majority of the Eritrea’s population residing within rural and semirural areas, relying predominantly on agriculture, crop cultivation, and animal husbandry for income, it is notable that many Eritrean women now proudly own land. Women’s ownership also extends to business, with a considerable proportion controlling small and medium-sized enterprises. Moreover, women now constitute a large segment of the workforce, and they remain very active in the informal sector. While women have traditionally been concentrated in manufacturing, such as the garment, leather, and tobacco industries, through steady improvements and investment in education and human capital, and greater access to opportunity, they are gradually transitioning to high-skill sectors.Around the world, it has long been the rule that women are inferior, with little ability to contribute substantively to society. However, from the days of the long struggle and since independence, Eritrea’s resilient women have shattered such outdated, patriarchal rules and notions through their wholehearted participation, struggle, contributions, and sacrifice. Today, Eritrean women are active within all areas of society and they contribute in many diverse ways, ultimately playing a crucial role in the country’s socio-economic progress and overall development.

In Eritrea, an old, backwards proverb states that, “like there is no donkey with horns, there is no woman with brains.” Relegating such sentiments to the dustbins of history, a more apt phrase, to borrow from a proclamation by the late Chairman Mao, is that “[Eritrean] women hold up half the sky.” This IWD (and every other day of the year), allow us to recognize and appreciate the key roles played by women in all sectors and begin to take tangible actions to ensure an equitable, inclusive society.