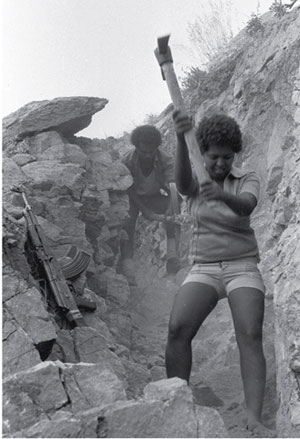 The 8th of March was chosen to be the International Women’s Day, and be celebrated every year, as a tribute to an American textile factory workers who in that particular day of March the 8th, 1908, staged a demonstration against their employer symbolizing the level of cruelty to women and child labor exploitation had reached, which testified inhuman disregard of their worth as mothers and breadwinners for their families.

The memories of the historical watersheds through the long course of women’s struggle for their rights that culminated in having the 8th of March recognized as the International Women’s Day refreshes their determination and perseverance. Thus, though lacked formal framework for organized struggle, individual women in many countries of Europe and America undertook, single-handedly, heroic initiatives against deprivation and exploitation of women at various periods of the 19th and 20th centuries. It was the cumulative struggles of those determined women that resulted in the Washington Conference of 1902 in the United States, which brought together delegates from seven countries representing Australia, Sweden, Germany, Britain, Canada, Norway and the United States under one roof. At that Conference, an ad hoc committee was formed to take charge of preparing another meeting that was convened in 1904 in Berlin, Germany. This time, delegations from 9 countries had attended, and formed a union to advocate the rights of women.

In 1910 at the Second International worldwide socialist party congress, German socialist Clara Zetkin proposed March 8th be proclaimed International Women’s Day, to commemorate the US demonstrations and honor working women the world over. Zetkin, a renowned revolutionary theoretician who argued with Lenin on women’s rights, was considered a grave threat to the European governments of her time; the Kaiser called her “the most dangerous sorceress in the empire.”

When it comes to Eritrea, Eritrean women have proved themselves in their struggle against injustice. Individual Eritrean women had involved themselves in political activities against foreign rulers as far back as the 40s and late 50s. They took active part in the anti-unionist campaigns as students or co-operated with their brothers who carried clandestine political duties in the ranks of the Eritrean Liberation Movement. Unfortunately, due to circumstances, those contributions have not yet been documented in the annals of history, a worthy subject for future research.

When the Eritrean armed struggle against occupation began in 1961 women started to play significant role in its advancement. They made valuable contributions inside the homeland, on both the rural, urban arenas, and in exile. As their numerical participation expanded the Eritrean women had done crucial work at various levels such as feeding fighters, caring for the wounded in action, gathering intelligence about the enemy, and\ taking part in combat. The role Sadia Tesfu played in the success of the Fedayeen operation against a notorious Ethiopian, Ibrahim Hamid Narai in the late 60s in Keren could be cited as one of the earliest women in combat.

As their participation’s expanded, their need for organized work became inevitable. Thus, In 1963 some of the Eritrean women who were living in Sudan had formed a secret cell whose purpose was to assist the (ELF) and it’s still very young military wing, the Eritrean Liberation Army (ELA) with valuable information and indispensable material help. Five years later, on 23 March 1969, students and spouses of exiled Eritrean politicians in Cairo, Egypt, established another union to properly channel their efforts in the ranks of the then rapidly advancing national struggle. This particular union played a crucial role in the propagating of their people’s just cause in the region.

By the closing years of the 60s, as the Eritrean armed struggle advanced, the Eritrean women transformed their role to carry arms side by side with their brothers.

In 1974 the Eritrean women formed the first General Union of Eritrean Women under the leadership of a prominent activist Amina Melekin. Moreover, she became the first leadership member of an organization in the Eritrean struggle. The Union played a significant role in enlightening the Eritrean women to be aware of their rights and to struggle for it. Ever since the Eritrean women associated themselves with the international celebrations of March 8th, they began to engage actively in organized struggle within the framework of their people’s resistance for independence and liberation. It is rationalized by the historical value that can be accrued from the background of women’s struggles outlined above.

The formation of the union was an implementation of one of the resolutions passed at the first Congress of the ELF in 1971.

After the first phase of the Eritrean people’s national struggle came to conclusion in 1991 with the defeat and departure of the Ethiopian occupation forces, Eritrea achieved formal independence and occupied its rightful place among the international community of nations.

The 8th of March always rekindles the spirit of struggle in all women who strive to win their human dignity and equality at all levels. In this spirit Eritrean women must once again renew their commitment to the on-going struggle of our people for prosperous nation building despite continuous international injustice.

Every year, International Women’s Day is seen as a time to reflect on progress made, to call for change and to celebrate acts of courage and determination by ordinary women who have played an extraordinary role in the history of their countries and communities. As such, the 2017 theme for International Women’s Day is “Women in the Changing World of Work: Planet 50-50 by 2030”.

The idea of this theme is to consider how to accelerate the 2030 Agenda, building momentum for the effective implementation of the new Sustainable Development Goals, especially Goal number five -Achieve gender equality and empower all women and girls-and number 4 –Ensure inclusive and quality education for all and promote lifelong learning. The theme will also focus on new commitments under UN Women’s Step It Up initiative, and other existing commitments on gender equality, women’s empowerment and women’s human rights. The world of work is changing, and with significant implications for women. On one hand, we have globalization, technological and digital revolution and the opportunities they bring, and on the other hand, the growing informality of labour, unstable livelihoods and incomes, new fiscal and trade policies and environmental impacts—all of which must be addressed in the context of women’s economic empowerment.

Against this backdrop, only 50 per cent of working age women are represented in the labour force globally, compared to 76 per cent of men. What’s more, an overwhelming majority of women are in the informal economy, subsidizing care and domestic work, and concentrated in lower-paid, lower-skill occupations with little or no social protection. Achieving gender equality in the world of work is imperative for sustainable development.

The United Nations observance on 8th March will call upon all actors to Step It Up for Gender Equality towards a Planet 50-50 by 2030 by ensuring that the world of work works for all women.

As a nation we look to be on the right track to gender parity, yet International Women’s Day should serve as more than a moment to recognize the contributions of successive generations of Eritrean women. Nor should this be a day primarily reserved for self-congratulation, although as a society we have made significant strides. Such behavior is a recipe for inertia not progress. Rather than celebrating where we have been and how far we have come, International Women’s Day should be an opportunity to properly index the serious challenges we must overcome.