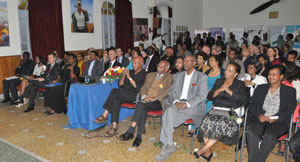 At the event in which senior government and Front officials as well as resident diplomats took part, Ms. Christine N. Umutoni, Resident/Humanitarian Coordinator and UNDP Resident

Representative, presented message of the Secretary General of the UN and underlined that empowering women is the primary alternative for ensuring their rights and development.

Ms. Christine also said that rejecting the rights of women has been the main cause for the set back of the socio-economic development of countries and that gender equality is the driving factor for the development of societies.

Mr. Ibrahim Sambuli, UNFPA Representative in Eritrea, pointed out that this year’s theme stipulates that finding ways for employment opportunity for women until 2030 and that empowering women has significant contribution in achieving the ‘Sustainable Development Goals”.

The Ambassador of the European Union, Mr. Christian Manahl on his part said that without ensuring the rights of women the rights of humanity could not be realized.

At the occasion, briefing as regards the role of Eritrean women during the armed struggle for independence and safeguarding the national sovereignty and development as well as the challenges encountered was presented by Ms. Rigat Tesfamicael from the NUEW Central office.

The event was highlighted by artifacts produced by women and different cultural shows by Aser Cultural troupe.

Different activities by Eritrean national abroad in connection with March 8