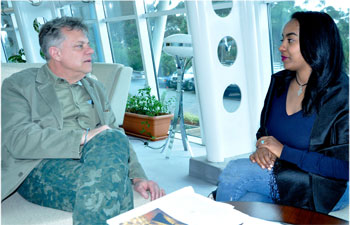 He is the very guy behind the popular Mama Zeineb’s “TOO BOLD IN THIS DAMN WORLD”!

It began in 1995 when I first came to Eritrea. Primarily in my role as a writer myself and as a poet I published poems about my experience. When I came to Eritrea in 1997, however, I co-organized the Conference Against All Odds: African Languages and Literature into the 21st Century.

It was at that conference that I got to know many Eritrean writers, historians, prose writers, fiction and non-fiction writers, poets and we just got along. As writers to writers, there was a kind of a wonderful balance of exchange between the two of us. Part of my method is to listen. I love being a listener, so from that I started translating Eritrean poets. In 2000 I put out two books and 2005 I had another book, an anthology.

One of the greatest ironies in relation to African Studies was in 1993. I found out that Africa’s greatest writer Ngugi Wathiongo was living 5 minutes from the hospital in which I was born in. Orange New Jersey! So it just seemed natural to visit my parents, and then visit and interview Ngugi Wathiongo. But there is an incongruity right there. How could a Jersey boy visiting his parents in the suburbs be suddenly talking with Africa’s greatest writer in exile from Kenya? Well, it happened and that interview changed my life!

Because Ngugi was very welcoming to my question and we had a very light hearted dialogue.

And suddenly this similarity impressed me in to the fire that I found in my dialogue with Ngugi. In my upcoming new book, there are three interviews with Ngugi ; there is one from 93, one from 99 and we just did one in April 2015.

He is a great advocate and he is also a part of it. He talked about how in this world we have something called “identity theft”. He talked about African literary identity theft. He was saying that the African literary identity has been stolen by Euro phone languages. They broke into African culture and started using African culture. But really, Ngugi’s message is “if you are going to write in African language, you are going to have to be part of African culture”. So it really boiled down to this precise point and it is a very convincing point, because none of us wants to have our identity stolen.

It is right? What if Africa’s literary identity is actually stolen? It is not that the Euro phone writing in Africa has anything wrong to it, it has been incredibly useful. I mean someone like Chinua Achebe is now listed as one of the major English stylists. He has taught in many high schools in America, again he is writing in English, and Ngugi is not saying better, Ngugi is only saying different.

It is very inspiring to me. Bottom line, I am here and I have been here in Eritrea maybe twenty times in Eritrea. I am a writer who when writing mainly uses African subjects. Half of my book Where War Was is my own poems that relate to Eritrea. And I should add here that in a lot of my writing I go to Africa as a cultural source. I want influences from all over. I want to learn from all over. I want to address an audience of many people from around the world.

Writing is a very humbling process because the material is always so much greater. No different from anyone else’s life; over these 50 years there have been personal challenges and tragedies in my life.

In relation to my projects in Eritrea, there was a great challenge in translating Eritrean poetry when Mr. Zemihret Yohannes suggested that I should come to Eritrea and focus on war poets. At first, I really didn’t think I could do it because war in representation of literature largely in the west is considered a very negative thing. It is not something that you praise or think positively of.

In that respect I thought “well, how could I do that? The audience will not like it” and furthermore, no poets for over a hundred years have written about war in a positive light. And I don’t mean that ‘positive’ is perhaps the right word, but the fact is that Eritrea had to fight as nation for its freedom. I had to make tremendous sacrifices to have its independence and it still has had to struggle and maintain its defensive and offensive posture to survive in very harsh world. It is not a light subject.

And it really became a matter of talking this out with Mr. Zemihret, as he said, that war is about so much more than a war. He called them ‘perennial issues’; friendship, love, struggle… and I started to approach it that way and realized that war poetry could have an emotional side too.

And it is still a harsh struggle to translate war poets and to get publishers to accept it, but we still manage to do.

Often, in terms of the western and international audience, it just seems that war is about violence. Realistically, some of the war poetry that I translated with Dr. Girmai Negash was accepted in journals and very well received.

But a funny thing happened. With the local writer and scholar Prof. Rahel Asghedom, we co-translated a work by an Eritrean woman Abeba Keleta entitled The Girl with the Gun and a very good journal called Words Without Borders had great reviews about it. You know when that came out, I stopped having doubts that Eritrean poetry would not be liked by western audience. That work had many wanders about things like “uh, women fought in Eritrea?”, “Oh, what is the EPLF?” or “Where is Eritrea?” all these questions…

And you know all this happened because the form of short stories is probably more accessible and universal… sometimes poetry could be a bit off-putting to people. It is not deserved but it is nevertheless reality. So, that short story started attracting all the attention towards the other war poets that I covered. It light up the room!

There was time for every project that I have embraced with passion, and it is always the ‘best one yet’. I learned so much from translating Eritrean works with Dr. Russom Haile, working on the anthology, and spending time with other poets. Every time, it has just been so inspiring to share the beauty of their work and culture.

On this trip I have been meeting and talking with many more writers; we are looking for a collection focusing on post war writing and writers in Eritrea. I am excited as much as I have been for all of the projects I have done so far. We are looking forward to translate these fabulous works, publish them on international journals and just write one more chapter.

I was introduced to mother Zeineb at the Against All Odds Conference in 2000. And she was the first reader in the Valley of Sycamores. We built an amphitheater and we had a number of readers from all over Africa and she came out and was introduced by a great writer and scholar Selomun Tsehay. When she came out she had an oral performance which I then wanted to have transcribed immediately. And so we ended up calling it Under the Sycamores.

I open up a lot of my poetry readings with that poem from mother Zeineb. And it immediately attracts people, because in every person’s heart there is the feeling that she or he is too bold for this damn world. And that was a wonderful passage by mother Zeineb, with her dramatic clothing and her jewelry and strong presence. And also a wonderful poem expressive of the Eritrean life. And the Eritrean Nation… too bold for this damn world.

It brings entities together. In one of my lectures I spoke about national development, I talk about literary development in Eritrea, and that has to go hand in hand with translation. Translation requires the study and practice of literature. We are talking about not the kind of translation of someone in the UN or an ambassador speaking… we are talking about literary translation, and it requires the love, experience and passion of the field. I have a passion for Eritrean literature. My message is not really original, I think that the voice of the Eritrean literature “the you of the you”, as Feradai puts it so well, is the voice that the world needs to hear.

Therefore, we need translation. The world needs the voices produced by native and not native speakers working together.

I am an educator, so I take responsibility as a professor to be a good teacher so that students who may be alienated from literature grow closer to it.

Nonetheless this young generation is very word conscious, have seen their tweets? Their posts on social networks? Their raps? That’s all writing. You know hip-hop is mostly African language, and there a good example for African literary scholars to recognize. Let’s look at African literature as much as hip-hop does. I love students. They are my favorite people for two reasons: one because they read, I may have to force them to read the books but they read, and two because they change their minds, they are open for changes.

I would want to express my thanks for all the great visits that I have had. I come back for a reason, I love Eritrea. I am grateful for the fact that I can come and work with great poets, scholars and engaging brilliant people.

I have a very good friend Ali Mohamed Jimale, who is a Somali scholar and poet. I told him a few weeks ago that I was leaving for Eritrea and he wrote to me an email, have a safe and productive trip to your adopted country. And so I have.

What do we know about the one million year old Eritrean Homo?