What do we know about the one million year old Eritrean Homo? 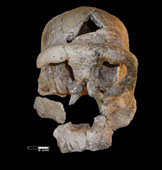 The Geo-paleo-anthropo-archaeological research conducted in the Eritrean Danakil Depression in the last two decades has resulted in the discovery of over 200 Late Early Pleistocene sites within 1000 meter thick fluvio-lacustrine sedimentary successions. Buia and Mulhuli-Amo are among the most well-known fossiliferous Late Early Pleistocene sites in the world. They are enriched by evidence of Homo fossils, macro and micro mammals and advanced lithic technological complexes. The nearly complete Homo cranium was discovered in the mid-1990s at the inhospitable area of Uadi Aalad (Buia basin).

Other evidences of Homo were found near the cranium (all probably belong to the same individual), which include a two permanent upper incisors, two conjoined pelvic fragments, a right iliac blade, a right acetabulum and partial ischium, forming an incomplete adult hip bone and a pubic symphysis. Due to their metrical features, these fossils are attributed to an adult female individual.

The discovery of this complete skull was a scientific breakthrough. To date, evidence of complete skull of Homo dating to between 1.4-0.65 Myrs is scarce

in Africa. Although, evidence of Homo has been reported from a number of Early Pleistocene sites in East Africa (Ileret, Konso, Daka, Olorgesailie), the addition of the Eritrean Homo (UA-31) has significantly enlarged the quality and variety of the Homo erectus/ ergaster record and re-launched the debate about its patterns of variation and evolutionary trends. The fossil specimens in general filled the gap between Homo erectus (1.4 Ma) and Homo heidelbergensis (0.65 Ma). This well known complete fossil skull from Buia was recently enriched by more fragments of Homo fossils from nearby site (Mulhuli- Amo), about 4.7 km far south of the Buia site. This evidence includes cranial and post cranial fossil specimens and, importantly a molar tooth. The Homo fossil evidence from Mulhuli-Amo is found at the same stratigraphic succession as the Buia Homo and it is of three individuals.

The Hominin species from Buia and Mulhuli-Amo comprise two distinctive and significant types of traits (1) primitive traits and (2) progressive traits. The primitive traits comprise low cranial height and the shape of the cranial profile in top view. The progressive traits include the marked expansion of the parietal bones and the vertically expanded face. The former is characterstic of the African Homo erectus/ergaster and the latter traits fit the Homo sapiens cranial morphology. This Hominin species acquired necessary anatomic changes as a response to various influences. Among these, the shift in paleoclimate (glacial/interglacial shifts) which is followed by paleoecological and diet changes could be considered significant. Hominins and other mammal species marked necessary changes due to climatic fluctuations. The global climate cycle marked by a paleoenvironmental shift resulted in species turnover around 1.0 Ma. This turnover resulted in extinction, migration and/or adaptation of species. Some species (Hominins and other mammals) developed rapid anatomic changes to adapt to harsh climatic changes. The Hominin species at this stage had advanced technological capabilities, brain capacity and anatomic developments to resist the climatic changes when they occurred.

By about 1.0 Ma these species pioneered efficient use of fire and highly complex technological stone tools (Acheulian stone tools). The density and variability of Acheulian lithic

assemblages which the Hominin species were able to collect from the Dandiero Basin, followed by MSA and LSA technologies from sites on the coast of the Red Sea (Abdur, Asfet, Gelealo NW and Misse East) marks the most significant epoch of the Pleistocene in the region. This important innovation enabled Hominins to acquire energy, thus, bigger brain size and change in intestine anatomy. These species had already mastered walking in an upright position (bipedalism) enabling them to spot enemies in remote areas, and importantly, to spend less energy and walk longer distances, unlike the quadrupedal mammals. The Buia Homo like any other African Homo species of the same age was living adjacent to the coastal flood plains of the Buia basin. At about 200,000 years ago, Homo ergaster was replaced by Homo sapiens in the region. The shoreline Red Sea Coast of the Buri Peninsula, dated 125+7 ka, contains the earliest well-dated evidence of Homo sapiens in coastal environments. These Prehistoric localities are testimony to ancient Human settlements, dispersals and cultural interactions within the extended Red Sea Coast and the Arabian Peninsula. These prehistoric Homo sapiens are the last and successful Hominin species to populate the planet.