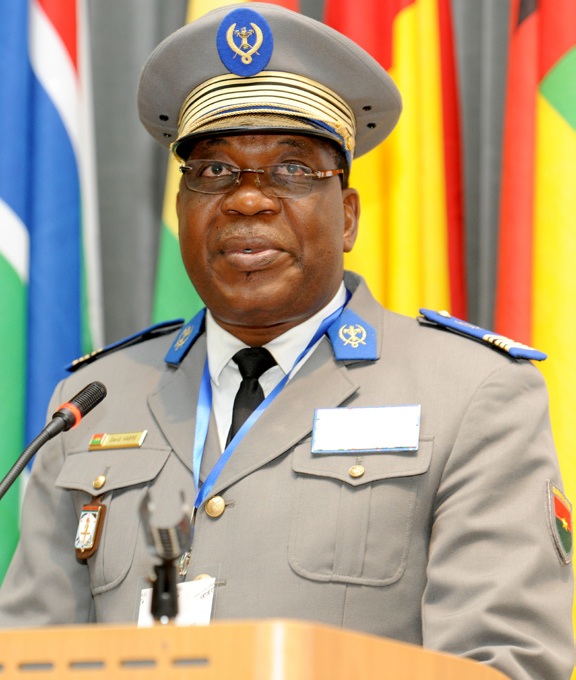 The 5th General Assembly of the Organization of Military Sports in Africa (OSMA) was conducted in Asmara, Eritrea, from the 8th to the 16th of March. At the end of the conference we had a chance to speak to the newly elected President of the organization, Col Kabre David of Burkina Faso. The Colonel talks about his general point of view regarding OSMA, military sports and his future plans as the new president of the organization.

Congratulations on your presidency, First of all please introduce yourself to our readers.

Thank you for giving me the chance to speak about OSMA. I am Colonel Kabre David from Burkina Faso. I am elected the new president for OSMA in this last 5th OSMA’s general assembly conference held in Asmara.

What can you say about OSMA generally?

It is a branch of the International Council of Military Sports (CISM), and OSMA was founded as a continental branch for African military sports. It is an organization that engages with military sports among African countries, while nurturing values and etiquettes of friendship and respect. OSMA works also to nurture a good culture of sport amongst countries of the continent. It focuses on several sports including, football, basketball and more.

Since its establishment in 1994, do you think that OSMA has achieved its originally set-out plans?

We can say that its establishment is not far back in time. I think that OSMA has achieved its essential aims and objectives, which originally and in the first place urged the establishment of OSMA itself. Because like I said before, OSMA’s main objectives are to lay ground for a strong sport culture in the continent. Therefore, I hope for OSMA’s future to be even stronger but so far it has been quite sufficient.

Because as part of and similarly to that of CISM, the established principles of fostering integration, solidarity and collaboration between the military forces of member states continue to be focal points of attention to the overall ventures of OSMA.

And here in Eritrea, where the culture of military sport has long been eminent. Is this something new to you?

It is necessary that I say that this culture of yours, where soldiers are very close to the community, is something inspirational.
But normally it is essential for the military not to be ostracized from the community. And a scene of amity between the people and the military is what a nation needs the most for matters of sovereignty. Hence, the army, far beyond matters of armed fortifications, needs to be nurtured by values of respect and amity. It is only when the people and the army are one that we can say that there is a balanced relation; the army is created for the people, so their integration is vital.

How was the conference?

Speaking about the conference, I would like to firstly thank the dedication we saw from Eritrean counterparts. And I am impressed with the equal participation of both genders; I saw both military men and women participate equally in the conference, and I respect that. And just yesterday we had a chance to appreciate the Eritrean tradition through cultural performances. You have a beautiful culture.

Talking about work, on this 5th general assembly of OSMA, we talked on issues of administration and implementation of charted out plans. Our conference in Asmara helped us in having clear visions of what the organization wants and needs for the coming two years. We also had an opportunity to adopt resolutions in line with our vision of enhancing friendship in our continent through sport. Also, as officials of OSMA and CISM, we discussed our respective roles in enhancing different areas regarding military sports.
The 5th OSMA general assembly has now lined out plans for the next two years, so we have had a successful working session.

How do you plan on handling OSMA’s future endeavors as the new president?

I know that my presidency comes with great responsibilities. We will continue to strengthen OSMA’s capacities and competences. We have asked and sought ways through which the member states can assist in charting out plans. We have equally discussed liaisons allowing further cooperation within OSMA members states at a continental level. We have the need to further nurture the union’s dynamic in every aspect.

What do you expect from the member countries?

I mentioned this a lot, but Eritrea’s contribution has been remarkable, especially during this last conference and work sessions. Officials from Eritrea ensured that the country will be welcoming to sport activities with other countries. And luckily for the organization the culture of sport in Eritrea is favorable for such conditions.
What I do expect from member states? Well, OSMA runs its activities on the contributions of member states, so I hope for our relation to be strong. The minimum we expect of a member country is genuine devotion towards the union’s goals and visions.

What should this mean to Africa? I mean Africa is the continent which is perceived negatively; famine, war, destruction… It all happens in Africa. Where does OSMA stand in changing the images, maybe portray positive sides of the story. Can OSMA realize this ‘friendly’ Africa we want?

Because especially after the Second World War history has not been in favor of Africa’s good reputation. Stories of war and destruction normally overshadow the good news. But sport is something that can be a means of change. Which is why I previously stressed on the essentiality for our relation to be strong. If our network is fortified maybe positive stories will be told. I believe that sport is one of the best ways to insure this.

I hope African countries utilize sport as a medium of avoiding clashes and permit positive changes of development and friendship amongst them. Which is exactly one of the top targets of OSMA, also something that the organization strongly acts for at a continental level.

At the end, Mr. President, what is your hope for OSMA and Africa?

My wishes for OSMA and Africa are wishes of development and amity. I wish for the organization visions to be realized, and embark on nouvelle stages. I hope for African countries to edify a strong network and together walk towards the general development of the continent.

Africa has potentials that aren’t explored yet, I hope sport will bring young Africans on international competitions. Lastly I wish success for the organization.