Reflections on OSMA in Eritrea 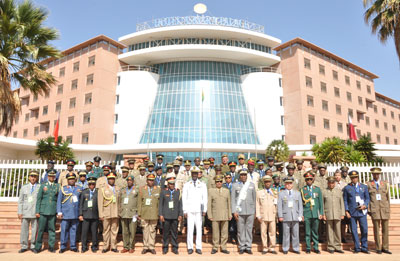 Throughout the year, Eritrea hosts many events and conferences varying in size and length. In fact, these past years, there is a growing interest in holding events by different organizations or groups in the capital city Asmara. In this regard, we saw the International Trade Union Conference of Africa (ITUC) in March 2016, the International Conference on Eritrean Studies (ICES) in July of the same year, to mention a few. Since the beginning of 2017, the trend continues.

As broadcasted in the news, the Organization of Military Sports in Africa (OSMA) held its 5th General Assembly in Asmara this past week. This largescale event was long awaited by the organizing committee composed of members of the Eritrean Defense Forces, the Commission of Sports and Culture as well as various local consultants. In truth, Eritrea showed once again its capabilities in hosting major events at the continental level through its commitment and hospitality skills. Chief delegates and those representing OSMA members’ states, along OMSA’s international umbrella organization, the International Council of Military Sports (CISM), took part. Requesting an important protocol, Eritrea managed to live up to lofty standards sought by guests.

During a press conference last Monday, the newly elected President of OSMA, Colonel Kabre David, was asked, “Why was Eritrea chosen to host the 5th General Assembly?” He explained that Eritrea had shown high levels of performance in sport and military sports on the international level and also had never failed to fulfil its OMSA membership requirements. As a result, Eritrea was chosen among the 18 members states composing the Board of Directors of the Organization.

Furthermore, many renowned athletes such as Nebiat Habtemariam or Ghirmay Ghebreselassie are also members of the Eritrean Defense Forces. Thus, what is clear is that the Eritrean military has played an important role in cultivating Eritrean athletes and hoisting them onto the international scene.

One may ask, “Why have military games?” In actual fact, the establishment of OSMA in 1994 was in response to the need to integrate sports within the military and to use it as an instrument in bringing different countries together. As such, the vision of OSMA is ‘Friendship Through Sport’ as a means of promoting peace for the development of the continent.
As a matter of fact, members of military may face frustration or disconnection with the civil world, creating division and lack of “belonging” from those military groups which may have grave ramifications for that country and the African continent at large. Undeniably, we often hear soldiers of certain country abusing their powers towards civilians, troops in Iraq or peacekeepers missions accused of abuse or violations. Therefore, OSMA aims to provide sports as an outlet to prevent such actions from occurring.

As General Philipos Woldeyohannes, Chief of Stuff of Eritrea’s Defence Forces, stressed during a courtesy visit by OSMA delegates on Monday, the 13th of March, “members of the Eritrean Armed Forces are integrated within the society and organizing sport events by including both civil and military teams, is a way to bring about synergy among the people”. In view of that, Eritrea has managed to enhance the importance of sports within the military by continuously organizing tournaments and games at regional and national levels and ensuring that both civilian and military teams are participating with the latest national tournament recorded in the last quarter of 2016 in Keren.

The idea of sports within the armed forces isn’t something new to Eritrea. Through an exhibition at the hall of the Asmara Palace Hotel, delegates were able to learn about the development of military sports in Eritrea dating back to the armed struggle until today.

Actually, after the strategic withdrawal of 1978 behind the trenches in Sahel, the Eritrean People’s Liberation Front (EPLF) organized sports events in 1981, 1987 and 1989 and began a long legacy of military sports until today in Eritrea through the Information and Communication Office of the Eritrean Defense Forces.

Upon independence, Eritrean military teams and athletes were able to display their athletic skills internationally as was witnessed with the Eritrean team’s triumph in OMSA’s Soccer Cup held in Kenya in 2002. More recently, five of the athletes participating in the 2016 Rio Olympics were members of the Eritrean Defense Forces.

Surely, sport is an agent of peace and its significance in a ‘troubled’ continent cannot be denied. The week-long event in Asmara, provided an opportunity for friendship and exchange among the representatives of the different defense forces within OSMA’s member states. Through dialogue, exchange of ideas and commitment, the General Assembly was a success with a record number of countries participating.

Organizing such a major event here in Eritrea has shown the Government of Eritrea’s commitment to enhancing diplomatic relations and spreading awareness throughout Africa about Eritrea and the Eritrean people.

“I walked down to the city last evening and I didn’t expect Asmara to be like this. It’s clean and the generosity of the people cannot be ignored and I saw cafes full of young people”, said the chief delegate of Senegal during my conversation with him on Sunday. “It’s amazing to see that almost everyone speaks English… I guess your Government, by providing free education, invests a lot in its people. It’s remarkable.”

“I am always following EriTV to learn more about the country when I’m back home and to finally be able to come it’s just as I expected. … Welcoming people which respect to its culture and values”, the Chief Delegate of Algeria told me during the coffee ceremony organized between two meetings.

“Thank you for keeping your culture and vision intact by not letting anyone interfere in the country’s richness,” expressed the delegate of Burundi at the closing dinner on Monday.

These are some of the impressions given during the course of the Assembly. Surely, organizing the OSMA 5th General Assembly in Eritrea gave the opportunity to the Eritrean Defense Forces to enhance their relations with other member’s states, highlight their eagerness to engage Africa in collaborative ways and take an active part in nation branding.

With this spirit, perhaps Eritrea will be able to host military games in the near future.