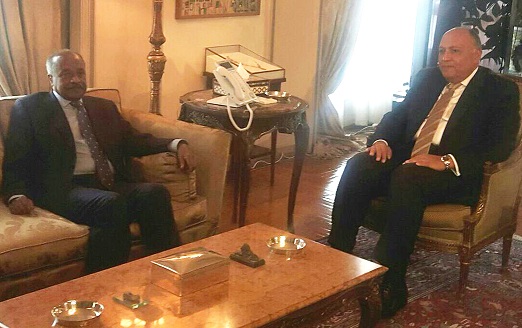 Eritrea’s high-level delegation concluded a four-day working visit to Egypt yesterday with a wrap up session between the two sides.

Asmara, 24 March 2017 – Eritrea’s high-level delegation concluded a four-day working visit to Egypt yesterday with a wrap up session between the two sides.

During the visit, the Eritrean delegation held talks with Egyptian Foreign Minister, Mr. Sameh Shoukry and with several business people.  The delegation also visited the large scale national project for fisheries and aquaculture, the Cairo International Fair for Egyptian Products and a number of other enterprises.

The bilateral talks centered on strengthening existing economic and trade relations between the two countries with special focus on the sectors of marine resources, agriculture, renewable energy, health, as well as banking and financial services.

In this respect, the two sides agreed to initiate at this stage concrete cooperation progammes in the sectors of marine resources and agriculture through the establishment of a fishing project as well as a joint model farm in Eastern Eritrea. They also agreed to boost bilateral trade, particularly in terms of increased Eritrean imports and mutual investment, starting with Egyptian investment in Eritrea in identified priority sectors.

In his concluding remark at the wrap us session, Eritrea’s Foreign Minister, Mr. Osman Saleh, expressed his appreciation for the warm hospitality accorded to his delegation by the Egyptian Government and officials of all the Egyptian institutions.   Mr. Osman further underlined that the Egyptian high level and multi-institutional delegation’s visit to Eritrea in the past month and the Eritrean delegation’s current visit to Egypt “underscore the determination of the two countries to develop their bilateral fraternal ties into a solid, multi-faceted, partnership that is mutually beneficial”.

The Egyptian Foreign Minister, Mr. Sameh Shoukry for his part asserted “Egypt’s willingness to strengthen bilateral relations between the two countries in all fields, for which there is great potential”.