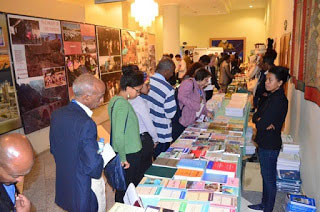 There’s nothing like the smell of old books or the crack of a new one’s spine. And it turns out that diving into a page-turner can also offer benefits toward your health and happiness.

The public library is a phenomena that to this day I still can’t get over. Free knowledge for anyone. Literally, anyone. I can’t think of an equivalent other than going to a clothing store, “checking out” an outfit, wearing the outfit and returning it in four weeks, free of charge.

Except books are so much better than clothes and to the delight of the most avid supporters and followers of Eritrean Literature as well as veracious book readers; the annual Eritrean Book Fair was opened yesterday at Expo, this being the 16th installation.

The Eritrean Book Fair was first launched in 2002. This was started with the agenda to encourage and develop reading habits in the country. Ever since 2002, the event has been embracing Eritreans and Non- Eritreans who are engaged in the preparation, printing, and distribution of books. This has been encouraging as its effect is self-evident. Of all such activities and hard work to promote reading in Eritrea, the Book Fair remains on top of the list as it is much organized and effective in many ways.

Reading books is deemed as one of the most important keys for success in education and in life in general. And it needs no illustration that reading develops our mind and expands our intellectual horizon. It can help us be more knowledgeable and successful.

What we fail to give due appreciation is the positive effects reading has in nation building. The fact that reading broadens our perspective and hence can enable us find solutions for problems improving our productivity in any endeavor we undertake is a much discussed assertion. Productivity and development are some of the pillars of an effective nation building process. Indeed, economy is an important factor that greatly influences the progress of nation building, which is largely the outcome of reading.

One aspect of reading’s role that is not much talked about is its service of being a catalyst for improving one’s life and enhancing shared social consciousness. Collective memory, knowledge and experiences can be greatly enhanced by reading. In this sense, reading can rightly be described as an invisible vehicle that can move people across time and place. Our bond with our fellow country people depends on how familiar we are with each other. Here the service of reading is perhaps inestimable. We know about the places, culture, tradition, history, potential and challenges of the country through reading and this forms our collective psyche that enables us to have a common vision and hence act in unison.

That is precisely the reason why in Eritrea’s struggle for liberation, literacy campaign was an important target.

During the struggle days reading became a kind of culture in the field among combatants. Imagine writing and reading in your own language and in your own culture. Prices were awarded for best writers and translators in the field and as a result the habit or reading caught on and everywhere behind enemy lines and in various trenches, the fighters kept on reading. There is a big lesson to be learned for the lazybones here, namely that one doesn’t need a sofa or a tablet to be able to read. The avid reader can read between battles and within canon’s range!

There are combatants who left for the field with little formal education and who at present can silence University professors in seconds. And there are those who had obtained their degree thirty or forty years back from such and such university and have never since read a single book to improve themselves. While the former deserve a university degree for the efforts they made, the latter should be deprived of their academic honors for allowing darkness to envelop their minds.

Indeed reading can be the most efficient process through which we can augment our knowledge in order to increase our productivity and foster the nation’s national consciousness. However, in countries like Eritrea reading is still in its infant stage. There could be many reasons for this. Fortunately, however, the trend is changing and people seem to be engaged in reading more, especially in the last five years where much has been done in terms of raising awareness in reading and publishing original Eritrean books by Eritrean writers.

Many years back I visited a friend, who thought books had other purposes than to be opened and read. To make matters worse, he lived with his otherwise illiterate mother. I had my dinner with the family and I was asked to spend the night, which I accepted.

“Do you have some interesting books to read for the night?” I asked preparing myself for any eventuality.

“I have some encyclopedia,” he said.

“Well, you see, this one here I use to prop up or support the old family wardrobe,” he said in a causal manner.

“What about this one?” I inquired pointing to one lying on the bed.

“I use that one to bolster the pillow,” he replied.

I saw another one under the bed, probably used as a footstool, but preferred to keep silent.

I’m sure his mother went one better and burned the whole set of Encyclopedia Britannica from A to Z to brew her coffee. It seems that in this way both mother and son got more light (and warmth) from the books by burning them than by reading them.

I looked around for a bookshelf, in vain. Probably burned with lofty treaties and learned dissertations.

My friend grew up hating books, for he was told to read books he little understood or that did not tune with his temperament.

Dismayed by his inexcusable ignorance, I decided to take him to the book fare that year and he was astounded by the number of people who attended the opening ceremony and the numerous amounts of books that were on display. He was especially amazed by the number of books written in Eritrean languages. He bought Alemseged Tesfay’s ‘Aynifelale’, surprisingly that was the first time he bought a book.

But now, my, once book-ignorant friend is a now book-warm. The Encyclopedias that were once used to support the family wardrobe and bolster the pillows are put in their rightful place; he now has a book-shelf-which he built himself- packed with different books.

Now for the fifth year running, my friend is looking forward to participating in the event. The event will be held from March 24th to April 2nd at the Expo Grounds. Ten days of book shopping and networking. I presume my friend will need a new shelf for his new books.

This year’s Book Fair demonstrates the continuation of the steady development the country has been registering in the area. It is hoped that this year’s event will also host a number of new writers and books and create a platform whereby the readers’ community can meet in person with the writers and share experiences.

While it is really appreciated that such an emphasis is given for promoting reading, it should also be noted that without the maximum participation and appreciation of citizens, the campaign couldn’t achieve its goal. You can tell just by setting your foot in the hall how much effort has been exerted to make this happen. Nor is it hard to understand why such priority is given to it. The fact is that in this era of globalization and in our endeavor to build a prosperous nation, a fully equipped and knowledgeable youth is a necessity. And one better way to attain this is building and cultivating a reading youth. Reading helps to expand one’s view of the world around us and diminish the barriers that may be on the way.

Since I am accused of being a writer, I would like to part my discussion with a short anecdote. After all, writers are not too different from the old men and women sitting around the fire and spinning tales throughout the night. During one “blackout” evening a couple of years ago, I lit a candle in my room in order to read a book. A friend of mine was amazed to find me doing this, arguing that the blackout gave me a valid excuse not to read. She wondered why I had to go out of my way to assault my eyes in that manner. She made this observation particularly because I was not enrolled in any academic institution and therefore I had no obligation to read. Let alone doing so with the help of a candle. I am sharing this story precisely because I believe that my friend’s attitude, namely that reading is an activity you embark on only when you have to prepare for an exam, is prevalent in our society. The education sector is of course a reliable barometer to measure literacy levels but this does not mean that reading should be confined to the classroom. It is unfortunate that we often realize the horror of a lack of a culture of reading at a very advanced stage.

Building a nation is a task that can’t afford any complacency. It is multi-dimensional which is why our effort to address it should be multi-faceted. Reading, hence, stands out as one of the fundamental and reliable ways. What makes it effective is perhaps its capacity to shape and mould our youngsters whose consciousness is the basis for a united and stronger nation we all aspire. The book fair therefore should be made one of our biggest festivals and every stakeholder should consciously contribute towards its realization, for it is one of the strongest catalysts for change.

Education and Human Resources Development in Eritrea Part I