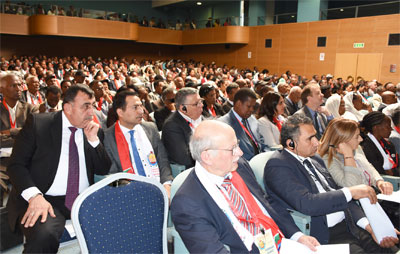 The 7th Congress of the National Confederation of Eritrean Workers is being held here in the capital. The Congress commenced on March 27th in the presence of President Isaias Afwerki, senior government officials, members of the diplomatic corps, including delegates from international organization and trade unions.

In an opening speech, Secretary General of the NCEW, Mr. Tekeste Baire, thanked the participants and expressed his gratitude to Eritrean workers for their devotion towards national development. He said that the concepts of ‘country’ and ‘workers’ are two faces of a coin, which is why he added, that Eritrean youth both fought and worked for the country’s independence; an ongoing struggle for development and sovereignty.

Mr. Tekeste pointed out that the Congress has made the rights of Eritrean workers a priority, even in the midst of foreign hostilities, and the yet unsettled delimitation process of the Eritrea-Ethiopia Final and Binding Boundary Commissions decision. Again, he thanked the Eritrean workers for prioritizing their people’s peace and stability notwithstanding continuous challenges. He further expressed his desire for enhanced achievements both for the Eritrean workers and the Confederation.

Mr. Arzeki Mezhoud noted that his visits to Eritrea are “lessons of strength, pride and strives for peace and human progress”. He expressed his conviction for a unified and developed Africa contrary to its past history of poverty and Apartheid, of which Eritrea is an example.

The president: “This Congress is taking place, if only by happenstance, at a time when Eritrea has just celebrated the 25th anniversary of its post-independence nation building

journey. As such, and even as we pay tribute to the long and proud history of struggle of Eritrean workers, it is imperative and timely to ask where does the NCEW want to go and how will it proceed in the years ahead”. President Isaias then explained that the vision and strategy Eritrea “tenaciously pursued” for its strategic nation building process was mainly aimed at ensuring sustainable and equal improvement in the livelihood of Eritrean citizens, to increase productivity for economic growth and prosperity, to build widespread infrastructure in all developmental sectors, to open ample employment opportunities and “above all, to cultivate and enhance a professional, experienced and highly disciplined labor force in all sectors, industries and enterprises”.

The president emphasized the necessity of further concerted action for superior outcomes. He said that whatever has been done so far should not entertain: “How many of the visions and strategies and plans spelled-out above have we achieved in the past quarter of century against the backdrop of a devastated economic reality? Literally below zero” said the President. He further elaborated that what Eritrea has so far become is simply a humble beginning, in hostile reality of the greatest that it should and it will have to be, avoiding orthodox patterns whereby only few make wealth on the shoulders of billions.

Later, Mr. Yemane Gebreab, Head of political affairs in the PFDJ, assessed the issue of the incredibly resourceful yet underdeveloped continent.
He talked about development in Africa: its pros and cons, peace and development in the continent and its prospects, as well as multifaceted factors affecting the continent’s development. In his discourse, Mr. Yemane said that ethnic diversity should have been Africa’s key ingredient for development; however, it has not been so. He went on to raise points that helped the participants evaluate the obstacles impeding Africa from a holistic and sustainable development. After his discourse, remarkable questions and comments poured from the Congress participants.

Mr. Kwasi Adu-Amankwah from ITUC-Africa, asked how, even after so many years of talks regarding African unity, still reality proves us otherwise. Mr. Yemane responded that it has been a sentiment of the African people, a ringing call of the forefathers of AU and many more, but to actually get there won’t be easy. He brought the example of EU in which many years of war and conflict raised awareness on unity and it has also made ‘peace’ imperative for a unified advancement. He said that Africa doesn’t necessarily need to go through similar experience, although he thinks it is an issue that Africa and Africans need to tackle in pragmatic ways. He stressed that the first step should be a ‘physical unity’, meaning the need for achieving unity at a national level first, with no discrimination amongst its people, and then aim for a continental unity. “I am not pretending to be an expert but the need to work on practical calls, which by no means is easy, will be focal”. Mr. Yemane highlighted the importance of at least: “a unified approach towards looking at the African development” in the closest future.

Messages of solidarity followed in the afternoon hours from SWTUF of Sudan, HAK-IS of Turkey and COTU of Kenya, OATUUU, ITUC, ACFTU of China, ILO-Cairo as well as from representative of the Bisha Mining Company.

Prior to that, Ms. Wafaa Abdel Kadir, a specialist in Workers’ activities in ILO/DWT Cairo, tackled the issue of work migration. In her discourse, Ms. Wafaa explained that work migration is a common longstanding occurrence, certainly growing more by the day. She explained ILO’s position summarizing its main objectives in: promoting rights for migrant workers, crafting agreements with trade unions in other countries and reaching out for migrant workers around the globe.

The second day of the 7th Congress began with Mr. Hagos Gebrehiwet’s PFDJ’s Head of Economic Affairs presentation on economic prospects and employment opportunities in Eritrea. Stating that agriculture covers more than 65% of the overall societal business activity in the country, Mr. Hagos went on to express the need to further enhance agricultural infrastructure and facilities. He reiterated that Eritrea has in fact prioritized food and water security. He also said that Eritrea is endowed with rich cultural, natural and historical heritages, and that tourism is definitely a sector with multifaceted ways for comprehensive benefits. Regarding employment, he reaffirmed his conviction on the advances Eritrea could enjoy from the Eritrean youth, and called on the society and government to empower the capacity of Eritrean labor force and nurture work discipline.

Following the discourse, participants of the session, directed questions regarding current issues, difficulties and shortages that the private sector is facing. A young participant suggested that graduates be appointed in deserved posts pertinent to their education. He said that this way could not only boost economic growth of the country but also decrease migration. More questions followed on the tourism sector, the new salary remuneration and more. Mr. Hagos Gebrehiwet answered the questions by citing government policies, economic restrictions, timely issues and the country’s current resources and goods. He also mentioned ways to strengthen Eritrea’s banking system and expressed his desire for the society to cooperate in pursuing legal monetary transaction. Mr. Hagos called on the National Confederation of Eritrean Workers to keep unifying its strength and stand for its members and also reminded Eritrean workers to enrich and constantly upgrade their educational and vocational capabilities.

In the morning session, delegates, representatives of International Labor and Trade Unions and invited guests went on a trip to Adi Halo; a trip to showcase of how the people and Government of Eritrea have been working to ensure food and water security since the dawn of independence. Meanwhile, members of the NCEW worked on adopting a Congress agenda and elected a new Congress Secretariat.

The day also saw NCEW financial report of the past decade. It was stated that in the past decade, the NCEW has been engaged in strengthening its internal capacities, mainly focusing on youth workers. The congress also created and worked on fortifying and expanding its international relations. Mr. Tekeste Baire gave an extensive report on the Confederation’s activities and financial report of 2006-2016.

The 7th Congress of the National Confederation of Eritrean Workers continues today the 29th of March on its third and final day with a scheduled presentation of the Congress Constitution, announcements of newly elected committees and new resolutions ending with closing ceremony.