It is time to say Good bye – Story of Solidarity! 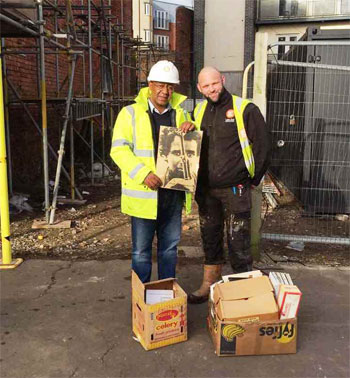 Warm sun streams through the high windows of the old Workers Film Association Media (WFA) & Cultural Center with members walking in single file past cardboard boxes stacked along the walls. When the doors close this week, it will be for the final time and the building which is slated for demolition is expected to be ready for fall in the next couple of days.

“I’ve noticed that … it’s more emotional,” said a member of WFA – Mark Smith, after smiling to me. But the building is saying goodbye and it has been here for at least a century; so it’s like an era.”

Since it was opened by members of Labour in 1976, the WFA in Manchester has been a place for debate, discussion and cultural activities. It was a center and home to Eritrea Support Committee, people such as Basil Davidson, Mary Dines, Amrit Wilson, Abdurahman Babu, Prof. Lionel Cliffe, David Pool, Prof. Richard Greenfield, George Galloway and all those who cared about Eritrea and its people during the struggle for independence.

What a history we have and what a friend and partner it has been to the Eritrean struggle and nation. During the long years of struggle Eritrea was blessed with internationalist support, film makers, researchers, academicians, trade and student unions.

Today the WFA Centre is a shadow of its former self and stands as history.

As far as we can see it is the only post-independence, post-liberation African heritage center in UK. It is a place imbued with this incredible history and it just feels important even when it’s dusty and derelict. “It has been very important to my generation and the generation before me,” Mark said. “I’ve always loved just walking down the halls of the WFA. I love history and I love that I’m so connected to it. “It’ll be sad, certainly. If the walls could speak,” he added with a smile.

Mark showed me some of WFA documents such as Abdurahman Babu’s article, “Eritrea: Its Present is the Remote Future of Others.” After spending sometime in Eritrea, Babu wrote in his article: “I am not ashamed to admit that I have been overwhelmed by what I saw, living, working and eating with these staunch revolutionaries”.

I am tempted to echo the famous quote from Babu: “I have seen the future of Africa and it works”. Abdurahman Babu added, “Eritrea was not the present – It is the future”.

The center also included media coverage by John Pilger. After visiting Eritrea in 1979, he described in the New Statesman the gruesome and heroic struggle of its people. John Pilger pieced together a report from letters and eye-witness accounts. His articles appeared worldwide in newspapers such as the Guardian, the Independent, the New York Times, the Los Angeles Times, the Mail & Guardian (South Africa), Aftonbladet (NL), Il Manifesto (Italy). He writes a regular column for the New Statesman, London.

The Embassy of the State of Eritrea to the UK and Ireland, would like to thank the (WFA), for its support during the struggle for independence and for the donation of all its historical documents on Eritrea. It has become clear that it is essential to compile a data-base of all the names of friends of Eritrea because they are part of the history of the struggle for Eritrea’s Independence.

We know you did all this to show your support to the people of Eritrea. You indulged our desire to have you all in one place at the same time.

The Embassy of the State of Eritrea believes that many useful historical documents remain in the hands of private individuals. As our identity, culture and heritage are reflected in such items. We call upon the custodians of such items to share them with us. These items may be in any format — maps, photographs, cassettes, written materials etc.

Embassy of Eritrea in the UK