Live by the sweat Of Thy Brow 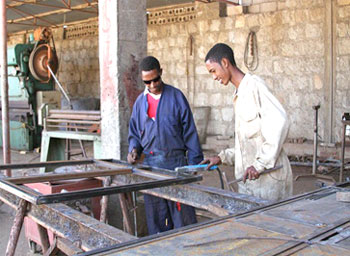 “Why do people work?” asked once a friend of mine known for his aversion to anything that distantly demanded physical or mental exertion such as lifting one’s fingers to move a chair, having to walk from one pub to the next on foot on a boozing spree, having to guess the days of the month to pay his debts or even trying to figure out whether pasta spaghetti is manufactured or simply grows on the field. Some people are really the quintessence of lethargy.

“Man’s mission in life is to work and to love,” I told him, quoting Sigmund Freud. My friend paused for a second.

“Love, yes, but by no means work,” he mused. I then explained to him that although the Good Lord decreed that we made love to multiply like rabbits to fill the earth, that, however, was not the kind of love He meant in the first place. What He really intended for us was to love ourselves and our neighbors and to show this through hard work and charity.

When someone talks about sloth, I always remember the lazy guy who one day told his equally lazy friend that finally he had come to realize that there was no need to flick one’s wrist to make the ashes fall from a half-smoked cigarette. If his friend waited enough, the ashes would fall down by themselves. In brief, he was acquainting his friend with one more skill in the art of indolence.

Man was created to work, to dress and keep the ‘earthly garden’ in which he was placed during creation. Thus, the first commandment man received from his Maker was probably: Live by the sweat of thy brow! But ever since creation, man has been living not by the sweat of his brow, but by the sweat of his frau (wife in German)!
The first organ to come to life in the embryonic creation of man while still in the mother’s womb is the heart. And it is this organ that keeps working non-stop during man’s short life on earth, and it is the last to die, cut short in the middle of its pumping. And when this happens, you just wake up dead in the morning.
Look at the ants and the bees. See how the latter work their ‘fingers to the bone’ and never complain about man’s greedy behavior who robs them of the fruits of their labor. How shameful!

Turn your gaze, and look at the humble ant. Doesn’t he sometimes seem to be working in vain struggling with a grain of wheat? Yet, he continues pushing it uphill with disappointing results. By pushing and rolling the grain in an aimless-looking effort, he may be doing something that he vaguely understands and which could have some indirect effect on his surroundings. Do your job, and leave the rest to God.

Again look at yourself, how your liver, which is a veritable chemistry lab, works day and night to keep you alive while you spend the vanishing days of your life in sloth and indolence probably boozing with the ladies.

It is very unfortunate that man is inclined to sloth and inactivity and would, if it were possible, lie down all day long under the shade of a mango tree waiting for ripe fruits to drop with direct hits onto his open mouth. Lazybones of the world unite, for you have nothing more to lose having already lost your self-respect and dignity!
But man is not created to feed and nourish himself alone, but to change himself and his environment.

The law of entropy presupposes that the energy in the universe will one day get totally dissipated causing the nightmare called “heat death” to happen, where things will come to a standstill and we will all turn into a universal canvas of the Impressionist paintings. Let’s hope that someone up there will forgive us our sins by changing the canvas into an animated cartoon to continue our lives in other planets.

Man is a fragile organism, and this applies to his environment as well, and if men do not work hard to preserve themselves by protecting their environment, the environment may eventually change them into post-doomsday cockroaches.

Man is supposed to change this apocalyptic course by working physically and mentally. Hence, to survive both physically in this planet and as a rational soul in this universe, man has to labor and toil. For as the Medieval Franciscans used to say, Erare est orare, (to work is to pray).

St. Paul, who of all saints seemed more in tune with ungodly communists the world over, had already said: “For even when we were with you, this we commanded you, that if any would not work, neither should he eat.”

It is therefore not love that makes the world go round, but it is rather work done to build and to change that makes it go round.
According to physics, work is energy in transit and should a constantly acting force fail to produce motion, no work is said to have been performed. In other words, if the work that you exert doesn’t produce any result, according to physics you are not working at all.

On the other hand, in the world of nature, man’s labor may not produce anything tangible or visible, yet it is still considered work because it helps him to understand and evaluate himself: his motives and intentions, his strengths and weaknesses, his successes and failures and lastly his mission in life.
Let’s say I have a garden and I plant a tree in its midst. If after watering and dressing the plant and nursing it till it grows I still don’t get any fruit from it, this won’t bring my labor to naught, for what should be taken into consideration is not the result but the intention, and my intention was to get some result in the form of fruits which for some reason I didn’t get.

Kenneth Alsop, a British writer and broadcaster says: “In work the greatest satisfaction lies in stretching yourself, using your abilities and making them expand, and knowing that you have accomplished something that could have been done only by you using your unique apparatus. This is really the centre of life, and those who never orientate themselves in this direction are missing more than they ever know”.

But suppose you have been dealing with an ungrateful earth, and a swarm of locusts destroyed what you have been toiling to make grow? So what? In toiling and laboring to produce something, you have at least learned to fight against adversity and perhaps come to know more about yourself in the process. You have learned how to pray and have humbled yourself before your Creator. This may help you in your journey made for self-knowledge which in some oriental religions is associated with the knowledge of God Himself.
Being a product of that Universal Mind you should adopt as your second nature the will to work and toil irrespective of results and fulfillments. Yours is to work, and what you accomplish or fail to accomplish will find a purpose in many mysterious ways. Of course, your intention should always be to build and to perfect something.

Nevertheless, if there be a tangible and clear purpose or a goal to your work it is much more preferable. And what should that goal be but to make the world a better place to live in. And this is accomplished by such work to contribute to the progress, peace and harmony of mankind, to the alleviation of man’s sufferings, to the enlightenment of the mind and soul, to the education of the masses, etc.

Who knows, in the future people might venerate Plato, Aristotle, Galileo, Copernicus, Isaac Newton, Voltaire, George Washington, Pasteur, Marconi, Alexander Fleming, Bill Gates, Marx, Einstein, Che Guevara, Ho Chi Minh, etc. in the same manner that they worship their saints and holy men. Didn’t both categories of people work to change the world for the better? Didn’t all toil to bring light to this world? Didn’t all labor to alleviate the suffering of the masses?

This is a good recommendation, that if any would not work … (even for the sake of work alone)… let him/her pack up and leave the world!
For in this world some people seem to be more useful dead than alive. And this reminds me of a sick joke I heard recently.

A man who, never lifted a finger all his life to help his wife and was loath to any kind of work, died. The woman, resourceful but a bit cruel cremated his remains and put the ashes in an hourglass.

“Get down to work now, you lazybones!” she shouted at the powdered remains of her spouse. And he kept working until the day she died.