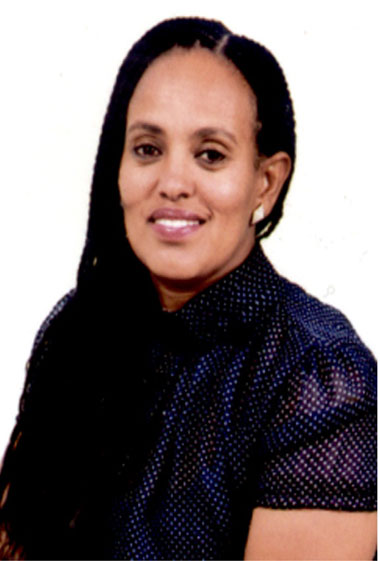 We bring you a fascinating story of a former athlete, now, a mother and a coach. Her love for athletics hasn’t faded even after getting married and having started a family. The first woman to ever become an athletics coach, with a carrier that takes up a lot of energy and hard work, Shewit Tesfagebriel manages to accomplish her duties as a mother at the same time as a coach of Zonal and National teams. Here is a short talk she had with us.


The incentives to become an athlete…

Honestly speaking, I can’t specifically answer why I became an athlete. I involved myself with school teams since I was young. However, it is when I started to win contests that I really began to have a passion for the sport. The moments made me think if I worked hard, I can remain great in sports. Though my parents didn’t support my interests; as any parent wishes they wanted me to focus on my studies. Through time and the various contests I took part in as well as the prizes I was awarded, my parents later changed their minds and became my big fans.

Your journey as an athlete…

After I got back from Sawa, I managed to join Benifer Military Sport Club. I involved myself in several matches with the club. It is a team which has played a great role in my journey to become better and a professional athlete. I was ranked 1st for almost 80 games I ran. As a result of my time scores, I was one of the female athletes selected to contest in Kenya in 2002 for the First African All Military Games. It was a first time experience for most of the athletes yet they managed to return back home with good results. I came in 5th and 4th place in 200 and 100 meters distance respectively, and also jumped 457cm in high jump. It was a contest where 32 countries took part and we came back gaining a huge experience. After that I was deeply involved in athletics and started to work on it with full heart. My attention was totally on athletics at those moments. After the race in Kenya, we went to Tunisia for additional courses and trainings.

Tell me about your particular Awards.

To mention a few of the competitions, in 2002. I received 10,000 Nakfa from President Isaias Afwerki for winning five gold medals in a contest. In 2003, I participated in all African games and ranked 6th and 7th in 100 and 200 meters race. Back in 2002, I participated in junior championship and I stood 8th and 7th in the same meters in 100 and 200 meters respectively. During my athletic years, I engaged myself in several workshops such as Women Leaderships, and took a course from the High Performance Training Center (HPTC) Eldorate Kenya in 2002 besides the coaching course I took in 2006.

You got married recently and got back to athletics instantly, how?

Yes I did. Actually, it was my husband who pushed me to get back to what I love doing. I wasn’t really sure I would handle my job the way I did, but my husband told me to keep my focus and give it a try. At first, it was a bit hard and, especially, since I had to take care of the babies. However, I had all the family support and particularly my husband’s. By now I am a mother of three and my husband takes care of our kids and let me do my job. By the way, I would like to express my gratitude to him and I really am grateful for all his concerns.

Shifting from an athlete to coaching job…

It really does take a lot of courage and confidence. I was working with the central region sport club in 2004 and when I had the chance to take the coaching course, I took it. In 2007 I was able to work as a coach for the Central Region athletics club.
After my marriage, I went back to working with the central region. At the moment we have several athletes, of both genders. I believe that I have the will and potential to make Eritrean athletics great. At first, I was just coaching the short distance runs. Since last year, I have coached athletes who run 1500 meters. This year, I have athletes that run for 5000 and 10000 meters.

I coach junior level athletes, which is difficult at times since they are young and need to understand what it takes to be a good athlete. And also there is the lack of support from the families and society as well. To overcome this, they need to dedicate themselves to the sport. They are still beginners but need great support from the coaches and families. I believe that if there were be several competitions organized there would definitely be numerous female athletes. But I mostly coach male athletes.

As a National and Zonal coach…

Big difference. When you are a zonal coach, you know exactly the weaknesses and strengths of your athletes, which helps out to bring the best out of them. But when you are coaching the National team, you need to bring the different athletes who are managed and coached in different ways to one to create a team spirit. It takes a lot of hard work and responsibilities. It has its similarities to zonal coaching but it is a different task.

I want to continue getting education on my field and work towards its development. We have the potentials to win Olympics again. We just need to realize it and work hard.

I want to thank my family for the great support. Especially, my unit division Benifer. They have supported me in every way they possibly can. Again I want to let the female athletes or anyone who has love for athletics to know that if you work hard, everything is possible.

Martin Plaut and the Politics of Famine Part II & Final

Live by the sweat Of Thy Brow