A Return Voyage to a Childhood City 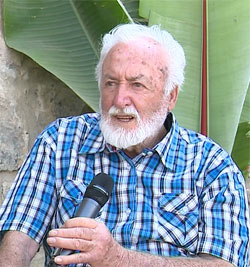 I was just a six year old boy when I first came to Asmara. It is a place where I grew up with lots of love and comfort which has a great place in my heart. My father was a construction contractor, the reason I was inspired to be just like him. He is the one who influenced me to have the determination and working spirit since my young age. My father has built numerous buildings: houses, churches, factories such as Meloti beer factory and sidewalks which still exist. He taught me the construction business. That is how I later started my own business, basically with my father’s employees. I was also a sportsperson, I enjoyed cycling and swimming, I was a diver. Cycling, I used to race against the famous cyclists back then, such as Yemane, Gerezgihier, Berebere and others. I was playing in the 2nd division. I loved living in Eritrea. It is because I had a great time and met great people that I haven’t been able to forget Asmara for so many years.

I was fortunate to have the chance to work with Eritrean colleagues in the construction business. We worked on several buildings and sidewalks mostly in Asmara. I would not find words to express the skills, potentials and, most of all, will of work Eritreans have. We used to work and eat together, just like families. The construction in Eritrea was one of the best, all the materials were made locally and were one of the best qualities. We used to do the jobs without any shortages and complications. I mostly did the sidewalk works of Asmara, for instance, the sidewalks of the Liberation Avenue, the buildings near Midian Hotel, the Kidane Mihret church and also my family house, now residence of the French Ambassador in Gezabanda. By the way I was so happy to see that the house is kept in good condition and taken care of. So these are few of the works I have done over the years. Honestly speaking, I am overjoyed to see the work I have done, but most of all, I am happy to see most of it is in good condition.

The love I have for Eritrea and Eritreans goes way back. I loved and enjoyed growing up here, so much so that I couldn’t stop thinking about the country the past 52 years. I missed the people I grew up with and worked with every minute that passed. Now that I am getting old I just had to make this trip. I wanted to see Eritrea, especially Asmara, one more time before I die. It is a delightful feeling to walk around pavements I built. I have visited almost every part of Asmara, and every step I took brought me a great memory of my youth, my friends, my work, and my time as a youth.

I am grateful to have found people who still speak the Italian language even though I haven’t f o r g o t t e n Tigrigna language. They have helped me in a tremendous way, guiding me during my stay. I was very excited to meet my old friends but I was not fortunate enough to find most of them, only few. However, the highlight of my trip was to find an inscription I engraved on the side of the Liberation Avenue. It is a more-than- 60 year- old inscription I did when my friend convinced me to write something so it could be a memory. One of the happiest moments of my life. I

am beyond glad that I made the decision to visit Asmara, my childhood home. Now that I have fulfilled my long anticipated dream of visiting Asmara, I can die a happy man.

Benetto was one of the strongest and most loyal people I know. I remember that he used to go to work by bicycle. He enjoyed riding and racing. He was a strong sportsperson. He even used to dive for about 3 to 5 meters without an oxygen tank to get a fish. I can see that he is a very happy man now that he has come and seen Asmara once again, I can see his happiness every time he runs into his old friends and his sadness when he learns that his friends are no longer alive. Benetto was strong as a young man and, he still is. I am glad that he has lived to see a city he dearly holds close to his heart.