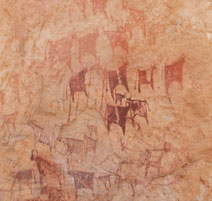 Rock arts are manmade images marked on caves and rock shelters commonly perceived as the visual language of the prehistoric societies. The art is a library that provides us information about the past and the natural environment. Images that had been depicted on rock surfaces convey important cultural heritage information and the cognitive ability of the prehistoric people. Rock art occurred before the advent of writing, and constitutes a wider testimony of early peoples’ expression of themselves and their world view.

The prehistoric depictions may represent the natural landscape of the environmental resources and the ideal perception of humankind expressed in the form of realistic and abstract visual art.

Prehistoric man may have learned his first graphic cognitive perception from the track of an animal or himself from footprints left in sand or mud clay. We would think today that these are symbols that man learned to perceive images and that inspired him to create his own artistic work. By the impression and freshness of footprint of the animal the hunter could guess immediately who passed by and how old the footprint was. This became an imitation in the production of rock art that had been adapted as a means of communicative media. To understand the dynamics of these ideas would open the way for us to understand the origins of art. We would be then able to understand the distinctions between realistic and abstract art. Caves were dwellings of humans before man adapted sedentary life. These are treasure houses that convey information about the life style of the humankind of the remote past and the history of animal species as well. The depiction of the species of the animals hunted, tells us much about the ecosystem in which humans lived, and the depiction of tools reveals their technical skills. Furthermore, rock art bears a big evidence of the cultural and intellectual history of humankind. The mythical images are essential aspects of cultural roots that convey the relationship between humans, nature and the supernatural entities in the past.

Rock art sites constitute one of the most valuable cultural heritage categories in Eritrea. The origins of rock art as well as human past cultural expressions in our region were not studied in depth and it is still in its infancy in Eritrea. In 1960s Paolo Graziosi recorded a number of significant sites in the southern region of Eritrea and associated them with Neolithic pastoralist societies who arrived from the Sahara around 5000 BP. He also collected rock painting samples from a few selected rock art sites and later in 2002 these objects were analyzed scientifically in Italy. The contents were hematite and manganese oxides in the red and black samples while the presence of carbon content which is indispensible for dating the pigments was not yet identified. In prehistoric time rock art paintings were prepared from various organic and inorganic materials known as pigments. In Eritrea the colors red, black, yellow and white predominantly occur in the rock art panels. Red and yellow paints are usually attained from ochre, while black is typically composed of charcoal or comes from minerals such as manganese. Likewise, white paint is usually created from chalk or kaolinite clay. Once the pigments are obtained, they are ground and mixed with binding liquids such as blood, urine, egg yolk, tree resins or glues. Engravings (petroglyphs) and geometric features are also widely spread in the rock art across the country. These constitute symbolic realistic images, iconographic drawings, mythical images and relief figurines. These images afford us rare opportunities to look into the past and provide us with insight into the lives of the ancient people in Eritrea.

Eritrea has a wide range of cultural and natural heritages, particularly with its prehistory embedded in its complex geographical locations. Geographically the country is divided into highland plateaus, the eastern and western escarpments, the eastern and western lowlands and the coastal or maritime coastal zones, which make it a region of ecological diversity. The central highlands are the hydraulic catchment area for the whole region and are the source of major drainage networks of the longest rivers, such as Mereb, Barka, Anseba, Hadas and Alighede rivers. As a matter of fact, the rock art sites are located in the river basin of the country, including the coastal and western lowlands, with the majority being situated in the central and northern highlands of the country. There are many caves and rock shelters in Eritrea that bear human remains embedded in the soil and art images depicted on caves and rock shelters. The potential regions of invaluable rock art heritage already registered in our archive include the Adi Keih, Tserona and Maiaini regions of Zoba Debub, Ghala Nefhi region of Zoba Maekel, Nakfa and Karora regions of Northern Red Sea and the Asmat environs of Zoba Anseba.

Homo Sapiens (modern humans) spread out of Africa to other parts of the earth probably around 100,000 years ago. There is a general perception among researchers that the distribution of rock art likely coincided with the migration of Homo sapiens. Because traces of early man’s art and imagination were discovered along his paths all over the world, the bulk of prehistoric creative expressions are preserved in the form of rock art. The study of this creative work at both international and regional levels could provide wider insights into human history, his imagination, and cognitive perceptions. Rock art of the hunters, for instance, was a conventional language, not only representing stylistic patterns but also figurative and symbolic images derived from a common thinking and expression among peoples of the earth depending on their adaptation and exploitation of the different environmental resources.

Eritrea is known as the cradle of human beings that exhibits the old craftsmanship of the prehistoric populations spanning the Early Stone Age (Lower Palaeolithic), Middle Stone Age (Middle Palaeolithic) and the Late Stone Age (Upper Palaeolithic, Mesolithic & Neolithic periods). The long history of human settlement is registered in the coastal areas as well as in the plateaus and lowlands with potential evidence of the Paleolithic (Stone Age sites) distributed in the regions. Much of the rock art sites are found together with evidence of prehistoric stone tools, suggesting that the art could predate the widely presumed pastoralist and domestication events that occurred 5000- 4000 years ago. While a great deal of the art demonstrates the relationship between cattle and humans, the presence of prey and predator animals as well as wild species resembling oryx, kudu and buffalos may suggest hunting scenes that occurred long before the presumed domestication of cattle in our region. The superimposition of some art over older features also shares a story of manipulation of the art over layers of time and therefore suggests that the origin of the art could indeed correspond with Late Paleolithic (Late Stone Age). The form, function, and spatial distribution of rock art reveals a great deal of information about the population dynamisms, their environment, and the belief and mythical systems to which they were deeply embedded. The rock art sites in Eritrea, in conclusion, not only have different contexts, themes and styles, but also demonstrate layers of depictions indicating different ages that spanned perhaps from the Late Paleolithic to the Neolithic which saw the introduction of domesticated animals in this part of the world. The sites, therefore, may belong to different groups of people from archaic hunters of the Late Paleolithic to pastoralists and farmers of the Neolithic. Further studies into the rock art of Eritrea, thus, should aim to establish firm dates to the different forms of the art and its cognitive content.

Supply of Fruits and Vegetables

Nakfa: The Land of Tenacity