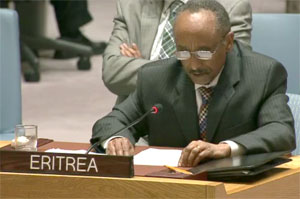 I would like to congratulate you on the assumption of the presidency of the Council for the month of April. I would like to thank the Chair of the Committee H.E Ambassador Kairat Umarov for his briefing as well as for his efforts to enhance constructive and genuine dialogue. I would like to assure you of my delegation’s full cooperation in the discharge of your responsibility.

As a matter of coincidence this open briefing of the UN Security Council is taking place on the very date the Eritrea-Ethiopia Boundary Commission gave its final and binding ruling 15 years ago, on 13 April 2002. To the regret of many who worked hard to realize peace, Ethiopia to this date continues to occupy sovereign Eritrean territory, including the town of Badme, in violation of its treaty obligation and international law. The hope of achieving peace and security for the people of the region has been dashed and the opportunity of building a common front for common challenges has been postponed indefinitely.

It would indeed be remiss of its duty of maintenance of international peace and security for the Security Council to ignore the failure and refusal by one of the parties to implement a mutual agreement that it had solemnly signed; particularly when we recall that this Agreement was guaranteed and witnessed by the United Nations, the African Union, the European Union, the United States and Algeria.

The Security Council is actively seized at the present time on all regional issues – the Sudan, South Sudan, Somalia, Yemen etc. where intra-State or inter State conflicts have or continue to rage. But it continues to studiously avoid the Eritrea/Ethiopia conflict. The UN Security Council cannot continue its fifteen years of inaction in the face of destabilizing acts of occupation and aggression that threaten regional peace and stability. This is not only morally and legally unacceptable but it is increasingly evident that the simmering tension is untenable and fraught with perilous escalation.

In the event, Eritrea reiterates its call to the UN Security Council to shoulder its responsibilities of maintaining international and regional peace through ensuring immediate and unconditional Ethiopia’s withdrawal from sovereign Eritrean territories, including the town of Badme.

The sanction, which has been imposed on Eritrea has entered its 8th year. Its negative impact on Eritrea and the Horn of Africa region cannot be minimized. Clearly, the time has come, in fact it is long overdue, to lift the sanction on Eritrea. In this regard, I would like to avail this opportunity to highlight few facts:

1. The sanction on Eritrea has never been justified nor motivated by a genuine desire to promote regional peace and security. If its imposition was unjustified its continuation can only be viewed as a desire to spread crises in a region that is already suffering from conflicts. We need less conflicts, not more.

2. The two justifications for the imposition of sanction were namely Eritrea’s alleged support to al-Shabab in Somalia as well as Eritrea’s alleged refusal to resolve its dispute with Djibouti. For four years the Somalia Eritrea Monitoring Group has found no evidence of any Eritrean wrong-doing in Somalia.

3. On Djibouti, Eritrea remains committed to the mediation of the State of Qatar, and has resulted in the release of all Djiboutian prisoners of war. The last Monitoring report made it clear that all its interlocutors, including the released Djiboutian prisoners of war only mention seven prisoners of war in Eritrea. These are all accounted for—two escapees, one who passed away and four who were released through the efforts of Qatar. Eritrea has confirmed that there are no more Djiboutian prisoners in its hands. Moreover, Eritrea cannot be asked to second guess the whereabouts of persons missing in action as claimed by Djibouti. The burden of proof squarely lies on the accuser, the Government of Djibouti. On its part, Eritrea is committed to resolve any outstanding issue with Djibouti under the mediation of Qatar.

Eritrea will continue to make its positive contribution towards regional peace, security and integration in the Horn of Africa and the Red Sea area. It calls to the UN Security Council to constructively contribute to peace, cooperation and amity in our region by lifting the unjust and counterproductive sanction against Eritrea and ending Ethiopia’s illegal occupation of sovereign Eritrean territory.

I thank you Madam President.