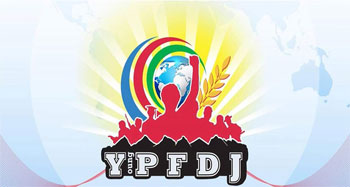 The 13th YPFDJ conference convened on Thursday 13 April 2017 after a full year of preparation and organisation to hold its 13th annual consecutive youth conference in the city of Veldhoven, in the Netherlands.

The 13th YPFDJ conference convened on Thursday 13 April 2017 after a full year of preparation and organisation to hold its 13th annual consecutive youth conference in the city of Veldhoven, in the Netherlands.

The conference had workshops designed to help youth discuss and debate European and global issues, learn from each other about their history, heritage and culture, as well as share their professional experiences.

The nearly 600 conference participants arrived from around the world, the majority were European citizens. They all arrived on Thursday 13 April and met for one full day and addressed part of the conference program before it was halted by the mayor of Veldhoven. That decision was a mistake of enormous proportion.

The decision made by the mayor and Dutch government was regrettable and politically motivated, and designed to halt the conference proceedings using false pretexts. The decision clearly violated the basic rights of assembly and freedom of expression of all the European-Eritrean citizens at the conference.

The purported reason given by the Dutch authorities to halt the conference abruptly within 24 hours was “public safety”, safety of the conference attendees. This reason is unacceptable and far removed from the reality of what transpired during the next two days.

The Conference Organizing Committee (COC), meticulously made all the necessary logistical arrangements and all participants had entered peacefully and in an orderly fashion without a single incident or disruption. At no time did the participants of the YPFDJ conference threaten the peace. In fact, for the last 13 years of holding conferences in different venues across Europe, including one in the Netherlands in 2008, there has never been a single complaint by any of the venues or city authorities in which the conferences were held.

All the transgressions that led to claiming public safety was committed by the Mayor of Veldhoven, several Dutch media outlets engaged in a frenzied effort to deny YPFDJ the right to hold the conference peacefully, and provided individuals who have been campaigning against Eritrea scornfully and obsessively for the past two decades, to instigate regime change in Eritrea.

The Mayor of Veldhoven inexplicably announced the address of the conference venue to the media on Wednesday 12th of April and the media outlets announced calls for demonstration in the local papers and around 60 individuals who recently sought asylum in the Netherlands turned up to violently protest, upon the urging by Professor Mirjam Van Reisen who has inserted herself in the Eritrean political arena, and taken sides. She advised some Eritreans who sought asylum in the Netherlands recently, that the only way to stop the conference was by provoking acts of violence and causing a disturbance. The evidence for this can be found all over social media and have been fully recorded.

Despite open provocation and violence by the protesters with Mirjam Van Reisen amongst them, all conference participants acted in a civilized manner and did nothing to retaliate against the violent actions, which included physical attacks on participants and vehicles entering the premises. The media outlets present outside the venue, with no knowledge about the conference, choreographed the protesters for the headline pictures and video clips disseminated throughout Holland and beyond.

Therefore, we find it unconstitutional and abuse of power by the Dutch authorities, to not only disrupt the conference and callously order the immediate evacuation of nearly 600 participants after darkness, putting everyone at risk including mothers with 4 months old babies.

After challenging the decision in court, the conference organisers offered to halt all conference activities and stay in the hotel as guests, the primary concern being the physical welfare and safety of the participants first; however, the authorities refused any consideration and forced all participants including babies, underage children, and disabled participants to leave the venue with little regards to find accommodation and transportation for the majority of the participants. Young adults who are European citizens were left stranded and dumbfounded in the middle of the night.

The conference participants who arrived to the Netherlands from all over Europe and some from USA and Africa did not have unplanned transportation tickets to travel back to their countries of residence, and even after presenting all the evidences of the enormity of their actions, the authorities decided to press the participants to vacate the hotel late in the evening, causing undue stress on conference participants.

For the young Europeans who were brought to learn the sacrosanct European values of freedom of assembly, speech, movement and expression and the right to be treated equally under the law, have been rudely awakened to the fact that these values do not apply to them. The message Dutch authorities sent this weekend is thus: “being an aggressor and committing violence by  a few people can pay off to reach one’s goal of disrupting meetings of law abiding citizens”.

Finally, the opening day of the conference was April 13 which reminds all Eritreans and Europeans with Eritrean heritage another day of injustice where the decision of the Eritrean Ethiopian Border Commission (EEBC) gave its Final and Binding decision in Den Hague, Netherlands in 2002. Justice is still denied to the Eritrean people who have been fighting against the occupation of Eritrean sovereign land, with European Nations standing with the aggressive and illegal nature of the Ethiopian government and continue to victimise Eritrea until this day.

The unfair and unjust decision by the Dutch Authorities on 13th April 2017 to halt and evacuate the YPFDJ conference was a stark reminder of the stance taken by the Dutch government and European states to victimise Eritreans and reward the violent bullies, just like the non-implementation of the EEBC decision in Den Hague on the 13th April 2002.

The resilient, dignified and law abiding  Eritreans and Europeans with Eritrean Heritage vacated the premises on the night with astounding organisation, compassion and solidarity for each other and managed to stay unshaken, despite the high level of treachery and collusion of the Dutch authorities with Professor Mirjam Van Reisen to deny their basic human rights and put their safety in danger in the middle of the night.

The organisers of YPFDJ along with all participants of the Conference and the vast organised Diaspora and justice seeking Europeans will seek to redress the injustice in every possible way and will make its plans clear in short period of time.

The Tour through the doyen eyes of Mike Tikue

Sport and cultural week in Logo-Anseba