The Tour through the doyen eyes of Mike Tikue 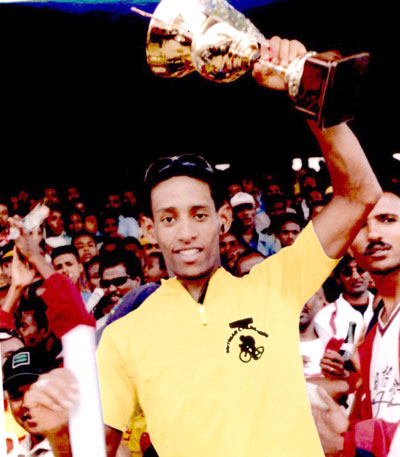 It is the season of the Tour of Eritrea!!! The highly anticipated yearly event is finally here, this time too, rousing the anticipation of the Eritrean cycling avid fans. This year’s Tour of Eritrea will be hosting four national teams: Eritrea, Rwanda, Sudan and the Republic of South Africa. And six clubs including Sembel, Asbecco, Eritel, Amore Vita, Bike Aid and Global.
Tour of Eritrea and other local races, involving a high calibre of competition and numerous challenges, have been vital stepping stones for Eritrean cyclists who have gone on to conquer and dominate African cycling. Evoking memories of some of the greatest dynasties within world sports, Eritrea has won the last seven African Continental Cycling Championships (an unprecedented feat in the competition’s history).
Eritrea Profile will celebrate this years’ Tour of Eritrea by inviting on today’s Q&A a prominent figure in the history of Eritrean cycling. Michael Tikue is a gem to Eritel Sport Club and modern Eritrean cycling in general.
He took part in almost all of the tournaments of Tour of Eritrea until his retirement in 2012. He still does his due part taking several organizational roles such as that of assistant commissioner and commissar too.
The former cyclist is here with us to share his memories and views regarding the Tour of Eritrea.

The history of the Tour of Eritrea

It dates back to as early as 2001. It was originally organized by local organizing committees. Meaning only national clubs would take part. I remember when I first took part in the tour, I had just joined the second division. The spirit back then was incredibly competitive because all of the cyclists came from Eritrea and hence we were familiar with the topography of the country. If I shall mention some of the big names back then; Efrem Tewolde and Yonas Zeccarias are the cycling stars that come to my mind.

So when exactly did UCI come to the picture?

Is there a memory you often recall from those days?

Yes. Throughout my whole career I never switched clubs. I started with Eritel Sport Club and submitted my retirement letter to that same club. A memory I often recall from those days is that of my club being champion six in a row!

And after you retired you still kept being involved with the tour, right?

Yes. I retired in 2012, but in 2009’s first tour under the supervision of UCI I was medically unfit to ride so I worked as an assistant commissioner. Then in the following tour I actually took back on my pedals and made it in the second place. Following my retirement I was involved in many of the tours in the organizational aspects. At times I worked as a commissar two and assistant commissioner.

What do you think of Tour of Eritrea in general?

We talk a lot about professionalism; and being able to have a professionally recognized and standardized tour is a plus to the longstanding culture of Eritrean cycling. It is awaited enthusiastically so I am glad we have it and hope for us to empower it with time.

Is this years’ tour going to be any different from the previous one?

Very similar, in the sense of sponsorship. Some small changes might be there. The organizing committee has been dedicated to pulling out a successful event and I really hope for this years’ tour to be well-off.

Champions of this tour are mostly Eritreans. I sometimes think that maybe the routes in the tour and the timing of the race being in one of the hottest of the year, were conscious decisions to helping Eritrean racers accumulate points as they are familiar with the local topography. Am I right to think so?

It might be rare, but there were some foreign riders who took the trophy home in the history of the Tour of Eritrea. Likewise, many Eritrean riders have done well in international arenas. Without necessarily having to be from Europe, for example. I am not denying that tours are often designed to best fit the aptitudes of national riders; however, at the end of the day it is all a matter of how good the cyclists are and how heated the overall spirit of the race is.

Thank you so much!