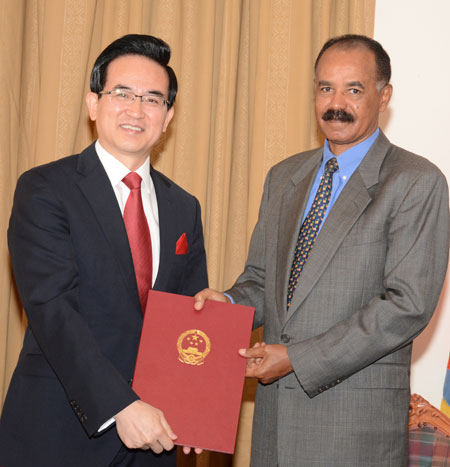 In the meeting with the Chinese Ambassador, Mr. Yang Zigang, President Isaias pointed put that the bilateral relations between the two countries that has existed for over 50 years now, is being strengthened and expanded through solid cooperation in various sectors.

In his discussions with the Indian Ambassador, Mr. Amrit Lugun, President Isaias expressed Eritrea’s profound appreciation for India’s significant contribution in the country’s human resources development drive, and underlined the GOE’s desire for its continuity.

President Isaias intimated to Pakistan’s Ambassador, Mr. Raza Bashir Tarar, that Eritrea fondly recognizes Pakistan’s historical stance as one of the few countries that staunchly supported Eritrean independence in the 1940s.  The two countries can build on this historical relations to further strengthen their bilateral ties of friendship and cooperation, President Isaias underlined.

Speaking with the Ambassadors of Kenya, Rwanda and Namibia, President Isaias pointed out that existing ties with those countries has not developed as expected. The President emphasized that frameworks of integration and mutual cooperation were imperative to secure regional peace and stability.

In the meeting with Ambassador Aykut Kumbaroglu of Turkey President Isaias expressed Eritrea’s readiness to reinforce the existing good relation with Turkey in the economic, political and diplomatic domains.

Similarly, President Isaias referred to shared values, prevailing opportunities for cooperation and the imperative to stand on the side of justice and legality as a basis for cultivating bilateral ties with all the other Ambassadors.