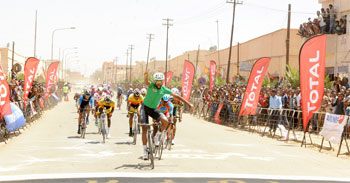 The Tour of Eritrea is still going on with intense fervor. It has so far covered 2 one day races and 4 stages; and the climb towards Asmara from Massawa is going on today as scheduled. In our previous publication we had reported the Tour up until the first stage. Here follows how it went afterwards.

The second stage of Tour of Eritrea went on, on the 19th of April. The Hagaz-Asmara route covered 117.16kms. The race started in Hagaz at 9:00. The town of Hagaz is found right below the mountains of Keren. Therefore riders started with a speed that they couldn’t keep up for long as the uphill ride to Keren showed up shortly. That is where the race slowed down and the breakaways got neutralized. But even so, the peloton got divided in the climb. A leading group of climbers got to Keren ahead marking a time gap of 00:01:40.

The group that led the way through the streets of Keren and part of the Baliwa climb towards Asmara were numbers 52 Zemenfes Selomun, 56 Amanuel Tsegay and 55 Mehari Tesfatsion of Eritrea National Team. Also riders of Eritel Sport Club: 61 Million Amanuel and 65 Aforki Habtemichael. From Sembel club we had 91 Dawit Haile and 96 Dawit Yemane. 73 Myles Vican Musschenbroek of South Africa National team as well as the Amore Vita boys, 82 Redi Halilaj and 85 David Ugarte.

The uphill route of Keren-Asmara slowly forced the riders to neutralize in one peloton, which shortly after started extending.

Number 56 Amanuel Tsegay then pitched a surprising persistent attack. He never got caught by any of the riders until the finish line in Asmara. Leaving the group of chasers and the peloton back at a time gap of 00:02:49 Amuel Tsegay became the stage winner. He gets two well-deserved jerseys!

Following Amanuel 00:01:35 was the second group of chasers; at eye sight the chasers were mainly from Eritrean National Team, Eritel Sport Club and Sembel club. Their sprint drove the Asmarino fans gathered at Bahti Meskerem insane. The 2nd, 3rd and 4th arrivers had differences of microseconds. South African Hendricks enjoyed the cheers he received from the fans for racing and finishing with his Eritrean colleagues. “I am happy” he said “I am glad I made it in the top ten along with the Eritrean riders”.

Meron Teshome of Bike Aid, though, was infuriated. He got mad at his bike. He just threw the poor bike on the ground. He didn’t speak about it soon after, but rumor had it, he got a flat tire 3 meters away from the finishing line. Nevertheless, that is not all. The 2nd stage’s yellow jersey holder seemed like he had another problem. Isabelle Fernandes, the UCI commissioner, argues that Meron perhaps was a victim of a “block” while sprinting. Protective Isabelle refused to print the results! After the race she went to our HQs to re-watch the game. By the way did I mention the press had real issues with getting close to the race? But hey, look at what happened! When confirmation was needed, we provided it.

Anyways, after tons of spectacle in the finish line and then in our studio, at 4 pm local time, the commissioner finally printed the results! The undeniable 1st place went to Amanuel Tsegay. She dragged Meron Teshome to the front at 2nd place from probably 6th or 7th. Kicking to the back Zemenfes Selomun who was definitely ahead of Meron Teshome –at least at eye sight and at the eyes of the public. Zemenfes Selomun and Meron Abraha who had led throughout the whole race were thrown to 8th and 9th places. And a surprise gift at 3rd place to Trevino Clint Hendricks of South Africa National team; he really had thought he placed 4th until the latest printout at 4 o’clock. The public has now a nickname for Mrs. Isabelle; they’re calling her ‘Meron’s Godmother’.

24 RIDERS FINISH THE RACE AT THE SAME TIME! INCREDIBLE.

We started off the third stage of the Tour of Eritrea on the 20th of April in Dekemhare. In comparison with previous and the coming stages, this one was relatively effortless. It covered a distance of less than a 100kms and had no climbs, bar two sprints.

Meron Teshome wore green jersey. He lost the yellow jersey to Amanuel Tsegy of the Eritrean National Team on the 2nd stage. He would have also lost the green one but he still managed to have it after his spectacular plea to the commissioner; also known as ‘Meron’s Godmother’.

Before the race began Samsom Selomun, coach of the Eritrean National Team, told the press that his boys are fixated on playing to keep the yellow jersey their teammate Amanuel Tsegay took away from Meron Teshome in the 2nd stage.

The tension in the air was heightened. The commotion at the finish line of the second stage has surely stirred a payback emotion amongst the riders. In fact, the riders kicked off the race with unbelievable speed. Continuous attacks from riders of Rwanda National Team added further impulse to the race.

The Dekemhare-Mendefera route covered 85.6kms and had two intermediate sprints: one in Asmara and one in Halhale.

In the outskirts of Asmara three riders attacked and broke away from the peloton at a time gap of 00:00:30. Number 2 Jean Bosco of Rwanda National Team, 84 Marco Bernardinetti of Amore Vita and 94 of Eritrean National Team led the way to Asmara, and then left Asmara via Godaif. They also got the points for the first intermediate sprint.
The route to Mendefera is a descent. There was no stopping from then onwards. They pedaled with more velocity. The peloton got extended. Inside the extended peloton the attacks were endless and many breakaways were attempted. They’d be shortly neutralized as the riders were riding at 70kms per hour.

On the slope down to Mendefera the peloton gulped the team of chasers and number 2 rider of team Rwanda who was ahead with the leading group. Meanwhile 84 of Amore Vita and 94 of team Eritrea dashed with more speed.

25kms away from the finishing line Marco Bernardinetti and  Yohanes Tesfay were still leading at a time distance of 00:01:30. But at roughly 17kms away a big breakaway group quaffed the two riders who led the race for long.

There was an incredible sprint. Very intense and crowded. Number 2 Jean Bosco of team Rwanda had an accident roughly 120 meters away from the finishing line. Meron Teshome of Bike Aid was classified first, followed by Issak Tesfom of team Eritrea and Trevino Hendricks of team South Africa. UCI reports of the stage show that 24 riders finished the race at 02h05’06’’. An awesome sprint!

When I rushed to interview him at the finish line in Massawa, number 82 Redi Halilaj of Amore Vita, couldn’t stop crying. He is the Tour of Eritrea’s 4th stage champion. He led the race at a time gap of 3 minutes, finishing first. “I haven’t won anything in the past three years. I came to Eritrea with a conviction of challenging myself with Eritrean riders. I think they are the best and the toughest. When I told people that I would be going to Eritrea to race they thought I was joking. They told not to bother trying.”

The 5th stage of the Tour of Eritrea continued yesterday Friday 21st from Mendefera to Massawa. The stage covered 169.94kms with two Category 2 climbs and two intermediate sprints. Soon after the start all of the riders of South Africa National team and Meron Teshome broke away and led the way until Halhale. The Eritrean National team then pedaled to protect the yellow jersey of their teammate reaching the breakaway outside of Halhale. The peloton got neutralized. At 37kms the route was flat, the pace of the peloton was prompt. After the climb in Menguda the race got more momentum in Asmara. The riders rushed through the avenues of Asmara benefitting from the fact that there are no strong winds to fight against.

Asmarinos flocked to the streets. Their sky rocketing cheers. The ever avid aficionados. They crowded the avenues as we left Asmara taking on the way to Massawa. A crazy descent through Shegerini, Arberebue, Seidici, Nefasit, Embatkala, Gindae and Dongolo led by sprinters of Eritel Sport Club and Bike Aid. You know the ‘bzzzzzz…’ sounds bees make while flying? That sound. That was the sound that charmingly came out the 49 whizzing wheels of the riders hovering through roads to Massawa.

When the riders covered 125kms the hit of the lowlands affected the performance of the riders. The peloton gradually started slowing down with no particular breakaways or attacks. In DongoloTahtay #92 of Sembel club, MussieYosief attacked and broke away from the peloton. He was soon reached by #82 of Amore Vita Redi Halilaj. The two rode together at a time distance of 00:03:30 until Dogoli. MussieYosief couldn’t keep up despite Hailaj’s encouragements. He drifted back and was joined by the peloton who started sprinting in the plains of Dogali realizing Halilaj was riding ahead laying a distance of more than 300 meters. Meanwhile Redi Halilaj had already made it to the finish line.

In today’s 5th and final stage riders will race back to Asmara. I will tell you more on the following publication. And don’t forget WE PEDAL FOR FRIENDSHIP.

Where the Heart lies: Linkages between Home and Diaspora