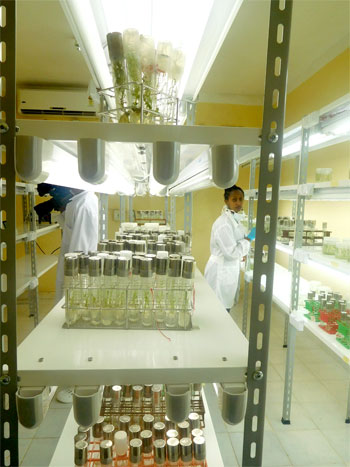 When Eritrea achieved independence, its economy was in ruins and public infrastructure and institutions were seriously damaged or destroyed. It had to start almost from scratch. The prime objectives were meeting the emergency needs of the people, rebuilding and rehabilitating its economic and social infrastructure and the institutions essential for achieving rapid economic and social development. The early years, Eritrea was able to lay the foundations for these causes.

Since most of the Eritrean people work on agriculture which is accounts at about 80% of the population, establishing institutions that help to increase the agricultural yields was essential. Starting from the Italian period, the British and then under Ethiopian rule, agricultural stations had been set up in different corners of the country. During the war of independence, the EPLF implemented some agricultural research programs in the areas it controlled.

The National Agricultural Research Institute (NARI) was established in 2003 with the mandates of conducting research in the fields of crop improvement, soil, plant protection, agricultural engineering, livestock and forestry, and also with carrying out vocational training in agriculture. In addition to its headquarters in Asmara, NARI operates regional research stations in Halhale (to fulfill the research needs of the highland and midland regions), Sheib (representing the eastern lowland region), and Goluj (representing the western lowland region).

NARI is a semiautonomous unit of the Ministry of Agriculture and by far the largest agricultural research agency in Eritrea, and it works in cooperation with different international research institutions. NARI consists of five commodity-based divisions (natural resources management, crop improvement, livestock research, agricultural engineering, and human resources development). It has many sub-divisions

A certified and pure seed is key to increasing agricultural productivity. Mr. Negusse Abraha, a crop improvement researcher, said that their department conducts research of seed chain components starting from breeding and improvement to reproduction and purification. After checking the seed’s standard, they finally provide it to the customers (farmers).

The public sector includes NARI and Hamelmalo Agricultural College. The private or informal seed system refers to the use of traditional seed variety by farmers that plays a significant role in conserving the traditional seed varieties. The department also engages in developing high yielding varieties. It conducts research on the local seed varieties and recommends seeds which suit the climate of Eritrea from co-partners. It also conducts screening functions in three stations; in Halahale in the highlands for highland crops, Goluj in the western lowlands and Sheib in the eastern lowlands for lowland crops.

Dr. Angosom, a soil physician, explained to us that soil test is an accurate and rapid chemical analysis for assessing its available nutrient status, followed by the interpretation of the soil test results from crop response field experiments, calibration and economic considerations for making fertilizer recommendation. The fertility of a particular soil can’t be judged by just looking at the soil, by feeling it or smelling it. It can only be measured by testing the soil in a laboratory. Soil testing provides insight into soil chemical health and suggests measures for removing any constraints and thus ensuring long-term soil management. Soil test based application rates are by and large balanced, more efficient and more economical compared to generalized application. Soil testing provides sound information about the fertility and productivity of the soil. This enables the farmer to make the most profitable use of some of the cost in farming.

The objective of soil test is to sort out the nutrient deficient areas from non-deficient ones and also provide insight into the degree of deficiency and sufficiency. This information is important for determining to what extent a given soil can supply adequate nutrient for optimum crop production.

The major objectives of soil testing are: to give soil fertility evaluation to make fertilizer recommendations for specific fields and farming situations to predict likely crop response to applied nutrients to classify soil into different fertility groups to prepare soil fertility maps of a given area and to assess the type and degree of soil related problems like salinity, sodicity, acidity etc. and to suggest appropriate amelioration measures.

Excerpts of the Remarks by Minister Osman Saleh at the Meeting with State Councilor of the PRC, Mr. Yang Jiechi