Where the Heart lies: Linkages between Home and Diaspora 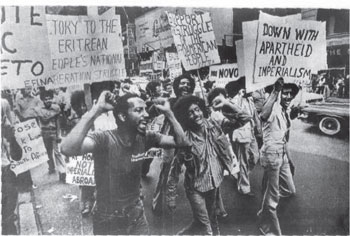 Momentous historical events are created, more than often, by youth through innovation, a daring drive for change, and/ or articulation of new vision of the world through organized movements. Actions against the apartheid regime in South Africa, movements against the Vietnam War, the Civil Rights Movement in the United States were all started by the youth. By the same token, the Eritrean struggle for independence was started also by the youth. In their twenties, they organized themselves into a political movement with the singular vision of an independent Eritrea; in retrospect, a formidable task that took more than thirty years to achieve.

Certainly, the struggle and sacrifice of the youth at that time cannot be underrated. Second generation Eritreans are following in their footsteps as they shoulder the burden of preserving the country’s independence in the face of unremitting external adversity and the challenges of nation building. Those living in the Diaspora were and remain important actors in the struggle for independence in raising awareness, in acting as the informal ambassadors of the country while supporting the nation financially and politically.

As the late Basil Davidson (1914-2010) stressed, the Eritrean armed struggle for independence is one of the recognized revolutions for being highly organized, with a clear ideology, efficient social programmes, extreme determination, and above all, it is the only revolution in the world which was able to integrate civil society, at home and externally in the Diaspora, to embrace its vision, ideology and struggle.

Indeed, the Diaspora was always mentioned as actors in the struggle for independence and such Diasporic movements are more than ever significant worldwide today. As written in one of my research papers written in 2010 entitled “Diaspora’s Contribution to the Developmental Process of the Homeland: the Case Study of the Eritrean Community in Switzerland”; there is a positive correlation between migration and development which attracted more attention since the late 1990s, not solely due to the rapid increase of global remittances but also because of the “proliferation of transnational networks and communities”, which play an increasing role in many country of the Global South (Tesfamichael 2010:13).

For instance, the Turkish Diaspora in Europe has been at the centre of discussion these past weeks, where European governments perhaps haven’t realized yet the weight of those migrant communities and their ties with their place of origin. Certainly, globalization has eased the communication between migrant communities and their homeland. As Adepoju (2000) highlighted in his paper: “Africans in the Diaspora: The Diaspora and Africa (2000)”, the Diaspora has taken a different dimension in the era of globalization and maintains an active interest and linkages with the country of origin; acting at times as “facilitators of projects for international assistance”.

Unquestionably, through time with the movement of people, individuals tend to try to find new roots in exile. Diaspora communities provide the bridges for fostering such attachments. Transnational networks are easily created with the ease to communicate and travel for Diaspora groups. They create a transnational trend by connecting relatives and playing a role in the economic and political life of the homeland. In other words, “aircraft carriers on which the ethnic/cultural airplanes of many nations land and take root but not completely and not necessarily forever” (Kennedy in Global Sociology, 2000:85).

The quote above clearly reflects the Eritrean Diaspora’s transnational network and is often challenged by groups or media trying to disconnect the linkage it has with the country and its rights to association. We have seen indeed, throughout the years, the numerous attempts to dissolve or making activities harder for Eritreans in the Diaspora to organize or to even help the country and relatives financially.

However, many researchers have shown how Diaspora communities play an important economic and political role in the motherland. Actually, Diaspora groups are often caught between the homeland and the host country where they live in. Being able to integrate into the latter while not forgetting the former is a challenge that many face and in particular second and third generation of migrants where the feeling of belonging becomes more difficult to preserve. Therefore, engaging those Diaspora groups have been essential and more and more recognized by governments.

Accordingly, Chikezie (2011) in his article Reinforcing the Contributions of African Diasporas to Development, explained that several African governments have understood the role of their Diaspora and created Diaspora affairs within their constituencies while some may engage Diaspora groups through network creation such as the Rwandan professionals in the Diaspora. The international community is becoming increasingly aware of the great role Diaspora can play in alleviating poverty as well as in creating jobs and entrepreneurship in the country of origin.

Hence, creating positive outcomes of Diaspora groups requires strategic planning and organization on how to get those groups abroad to engage effectively and sustainably with the homeland without interfering negatively in the lives of the “locals” and avoiding tensions between those two groups. Without doubt, Diaspora groups continue to work on voluntary basis and are driven by passion and, consequently have to balance family and work obligations (Chikezie 2011:267). It is surely the role of governments to guide those groups on ways to contribute on a sustainable basis besides remittances which are often subjects to fluctuations and dependency.

It is, thus, important to create a mechanism where the money could contribute to the country’s development more efficiently. It is with this in mind that the Government of Eritrea, taking  stock of the great role its Diaspora had played during the armed struggle financially, materially and politically, enacted after independence in 1994, the Rehabilitation and Recovery Tax (i.e. 2% income tax).

But there are also countervailing forces and in this sense, the Eritrean Diaspora has been subjected to probing academic discourse. Some question and harbour serious misgivings on the validity and longevity of strong Diaspora linkages with the homeland in view of the inevitable and centrifugal trends of assimilation in the host country. Others have gone further, essentially for nefarious political ends, to advocate or agitate for total severance of the umbilical cord that connects stock of the great role its Diaspora had played during the armed struggle financially, materially and politically, enacted after independence in 1994, the Rehabilitation and Recovery Tax (i.e. 2% income tax).

But there are also countervailing forces and in this sense, the Eritrean Diaspora has been subjected to probing academic discourse. Some question and harbour serious misgivings on the validity and longevity of strong Diaspora linkages with the homeland in view of the inevitable and centrifugal trends of assimilation in the host country. Others have gone further, essentially for nefarious political ends, to advocate or agitate for total severance of the umbilical cord that connects Diaspora to the Homeland. The untenable campaigns to stop nominal payment of the Rehabilitation and Recovery Tax (RRT) that is wrongly misconstrued as “extortion”; outrageous measures taken to disrupt or prevent different Eritrean youth and other association from holding conferences are all manifestations of this negative stance.

What transpired in Holland last week is a case in point. Each year at the time of Easter, Eritrean youth in Europe, North America, Africa, Australia and Eritrea come together for a conference in one of the European cities. On the weekend of 13th April, the regular YPFDJ Conference was held in the Netherlands under the theme of “Our Vision: Regional and International Partnership, Peace and Development”. This platform blends social events with vibrant debate and discussion programmes on a host of developmental issues and challenges in the Homeland.

But for reasons that are difficult to understand, the Conference was stopped after the first day through the high-handed decision of the Mayor of the town of Veldhoven and a subsequent swift order of the local court which blindly endorsed the Mayor’s ill-advised decision. The ludicrous reason given was to “protect public order” as some hooligans (the initial number was around 30) staged a protest outside the Conference Hall. The whole affair smacks of subtle complicity of elements in the Dutch Government who harbour negative agendas on Eritrea and the connectivity of the Diaspora with the home country.

These hurdles notwithstanding, it is critically important that youth groups such as YPFDJ, and other civil societies in the Diaspora continue to play greater role in Eritrea’s nation-building; to be able to understand the challenges and prospects in their home country; to march in lock-step with their compatriots back home. The engagement is also a two-way street as the government and all relevant institutions in the Homeland have also to invest time and energy to ensure the success of the endeavour. As Chikezie (2011:267) stressed in this regard, “African governments embark upon this venture in a sustained, systematic way that enhances capabilities and delivers tangible benefits”.

Excerpts of the Remarks by Minister Osman Saleh at the Meeting with State Councilor of the PRC, Mr. Yang Jiechi